Ginger Rogers is the daughter of boardinghouse owners in Washington, DC who falls in love with Aaron Burr and James Madison.

Generally speaking, historical fiction is more than welcome to use as much or as little of either of the words that make up its name in any given story. There are a few caveats, however, as the more a story involves the actual history portion of historical fiction, the more the story itself and the characters involved – historical or not – have to work to make that factual account mean something within the context of all the fiction that's going on.

The obligation is doubled, then, when the story in question chooses to use real life figures in the fictionalized account, as the needs of those historical figures must also be met within the perspective of whatever story is being told, while still remaining within the boundaries of what is actually known. (Unless, of course, you're Quentin Tarantino. In which case, rewriting history is seen as not only your prerogative, but it has become an expectation.)

With that in mind, the 1946 downy romance 'Magnificent Doll' – about the dreamy interludes of Dorothea "Dolly" Payne – starring Ginger Rogers in the title role, walks a fine line with its depiction of history and its illustration of romance, fictionalized or not.

The film itself features a tremendous cast in addition to Rogers. On one side of the romantic equation is the fantastic David Niven as Aaron Burr and on the other is the endlessly likeable Burgess Meredith as James Madison. Niven is delightfully slick from start to finish, playing Burr as a roguish brigand, a firebrand, and borderline anarchist who lusts after power in the American government like a villain in a Bond movie – which perhaps came in handy when he helped satirize the world of Ian Fleming 21 years later in 'Casino Royale.'

Meredith, for his part, is far less a caricature than Niven's portrayal of Burr. His rendition of Madison is much more an archetypal character. He is a stoic, understanding man whose calm and grace in stressful situations is the personification of what the American people think of when they imagine the Founding Fathers – which is fitting, given Madison's moniker as the "Father of the Constitution" – not to mention his ascension to the presidency following Thomas Jefferson. 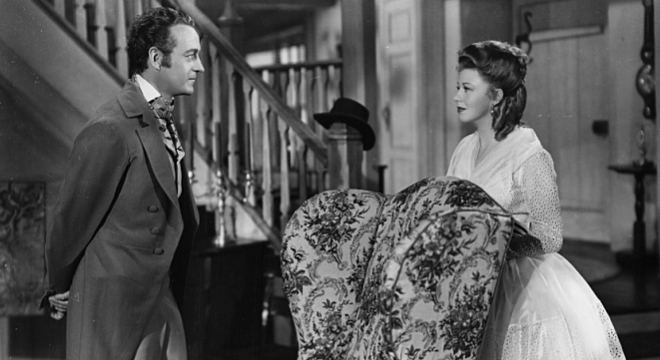 And yet, despite having two class acts like Niven and Meredith ready to take the lead, 'Magnfiicent Doll' focuses primarily on Dolly's life and her ambitions – which, at the time revolved mostly around the concept of finding and experiencing true love. Much of that is heavily explored during the early portion of the film, which focuses on Dolly's first marriage to John Todd. It was an arranged marriage that she did not approve of, and as such, Rogers spends the opening minute of the film telling Todd that she will never love him, and he devotes much of his brief time on screen attempting to prove her wrong. Regardless her feelings, Dolly soon bears John a child, and just as she's starting to come around to the kindly Mr. Todd, he is struck down by an outbreak of yellow fever.

From there the film moves ahead in time as Dolly moves in with her widowed mother, taking on boarders in their house – one of whom, it is quickly established, is brash and aggressive Aaron Burr. Burr takes an immediate liking to Dolly for obvious reasons, and pursues her with all the vigor of a man obsessed. On one of their early dates, Burr skips the theater he'd promised to take Dolly to, in favor of bringing her to a disreputable tavern where they watch, in a heavy-handed bit of historical foreshadowing, two men engage in a duel to the death.

The film takes the notion of dueling men quite seriously, as it becomes a recurring theme throughout the story. While Burr is busy courting Dolly and the presidency, he finds his position challenged by Madison, who proves himself much more the man Dolly had envisioned for herself than the rapacious Burr.

Unfortunately, the Burr/Madison rivalry has all the intensity of an overweight housecat napping in a sunbeam. While Niven's Burr is handed a great many speeches and monologues that superficially deepen his character, Meredith's Madison is little more than a prop to for Dolly to have her day addressing what it means to be an American. She is granted a scene-stealing monologue of her own near the end of the film that puts Dolly Madison's role as future first lady and archetypal example of the role into perspective, but it is done so at expense to the narrative as a whole, and to all the other characters as well.

In the end, the only one who emerges from the saccharine earnestness of Irving Stone's screenplay as someone with whom the audience might want to spend time with is Niven's cold, borderline sociopathic Burr. It's only too bad the screenplay glosses over his career-ruining duel with Alexander Hamilton the same way it glosses over the other instances of political intrigue in favor of declarations of romantic want from a woman who is deserving of a story that depicts her as something more than in need of a man.

'Magnificent Doll' makes for interesting viewing, if not for its narrative or its thinly drawn characters, then for the historical artifact it has become in the 67 years since its release. At this point, the film offers two glimpses into the past for the price of one. It's just too bad the more interesting one is how this movie doesn't stand up to the test of time. 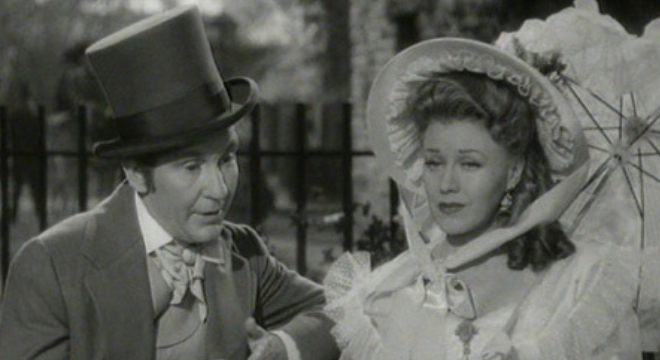 'Magnificent Doll' comes from Olive Films as a single 25GB Blu-ray disc. As with all Olive Films, the disc is free from special features.

The 1080p AVC/MPEG-4 encoded transfer presents the film with very nice levels of contrast, giving the black-and-white picture very strong black levels and a consistent white balance that never runs too hot or appears overblown. There is no trace of banding or crush anywhere in the film, as delineation of the gray scale is good throughout.

Edges are intermittently sharp, as the film is presented in soft focus much of the time. That's not to say there aren't moments where the image is crisp, but for the most part, 'Magnificent Doll' has a slightly gauzy look to it. That also means that fine detail is lower than usual – which, also is unsurprising given the film's age. Facial features are somewhat flat, while textures are only present in the most extreme close-ups. Shot on a set, most backgrounds are deliberately obscured through the shallow depth of field, and while this gives the film a far more intimate feeling, it isn't terribly impressive to look at from a technical point of view.

There are also plenty signs of the film's age. Dirt and scratches are plentiful in some scenes, and other artifacts pop up regularly, making this a fine image given how old the film is, but it is not going to impress many who are watching it.

The DTS-HD Master Audio 1.0 mix offers serviceable sound that, despite occasionally sounding somewhat hollow or flat, is at least free from other more egregious imperfections that might be caused by the film's age.

Dialogue is clear for the most part, but can be anemic at times, requiring the volume to be adjusted during certain scenes. The score is by far the most robust aspect of the mix. It is strong, and comes through without any distortion from beginning to end. This does generate some issue with regard to balance, as the score can overwhelm the dialogue in many places, as the mix struggles to utilize both in a consistent manner.

There is some subtle atmospheric work going on during certain portions of the film. Most of this happens near the end, where a large group of people is competing against one another to have their voice heard. The effect is close to immersive, and shows off the surprising depth of the mix in that one instance.

Overall, a nice, but inconsistent mix is offered here.

'Magnificent Doll' does not contain any special features.

'Magnificent Doll' doesn't nearly have the ambitions of the characters it intends to portray and the end result of that is a film lacking in conviction. The balance between politics, women's voices being heard, and romance is wobbly at best, and such unevenness only works to undo the strength of Rogers and Niven's performances. Although it has the stamp of historical fiction on it, this effort from all involved is simply too light and airy to deliver the significance its characters imply. Still, for those interested in classic cinema, this one is worth a look.

Sale Price 10.95
List Price 20
Buy Now
3rd Party 9.99
In Stock.
See what people are saying about this story or others
See Comments in Forum
Previous Next
Pre-Orders
Tomorrow's latest releases