Set in present-day France, Rosemary's Baby centers on a young married couple that escapes New York and moves to Paris with hopes of leaving their sad past behind. After a series of unfortunate events, Rosemary and Guy Woodhouse are presented with an offer they can't refuse - an apartment at the most prestigious address in the city. Problem is, it comes with a haunted past, and an immeasurable price.

The very lovely Zoe Saldana ('Star Trek Into Darkness,' 'Guardians of the Galaxy') stars as the eponymous heroine in 'Rosemary's Baby,' a two-part NBC miniseries that modernizes Ira Levin's 1967 novel but ultimately fails to conjure up the same terrifying, disquieted atmosphere of suspicion, fear and portent experienced in Roman Polanski's horror classic. In that far superior adaptation, Mia Farrow was superb as the pathetically enervated and timid Rosemary Woodhouse, for which she will always be cherished, so comparisons are not only likely and warranted but darn-near necessary. Thankfully, Saldana is one of the few genuine highlights in this television production from Oscar-nominated Polish director Agnieszka Holland, who also does the best she can with the material to feel unique.

Granted, this Rosemary remains the same fearful character as portrayed by Farrow, but the similarities thankfully end there. Saldana's Rosemary, who's still in anguish from a miscarriage three months earlier, displays a few sparks of inner strength hidden just beneath a submissive outer exterior. Over time, as she peels away layers of mystery and deception created by the much too-friendly couple Roman (Jason Isaacs) and Margaux Castevet (Carole Bouquet), that tucked-away backbone surfaces and serves her, and the narrative, well in uncovering the terrifying truth. Feeling suspicious however isn't all that difficult since the Castevets are both practically twirling figurative moustaches between their fingers. Even so, the character's fight for control over her body is an interesting topical point that sadly Holland and her team simply gloss over.

Relocating from the Gothic Revival style apartment building in New York City to the prestigious, upper-class flats of Paris, the contemporary adaptation written by Scott Abbott ('Queen of the Damned') and James Wong ('Final Destination') heavily departs from its original source in various other areas and plot points. However, with strong, stylized camerawork from Holland and lush, impressive photography by Michel Amathieu ('Penelope,' 'Paris, je t'aime'), the series maintains interest and features a few moments that effectively captivate. The night Rosemary and her husband Guy (Patrick J. Adams) decide to make a baby is a spooky ritual of unknown faces and a nameless, mysterious billionaire with striking blue eyes (Stefano Cassetti). Guy's sudden rise to success comes at the expense of a shockingly gory death scene of a school colleague that breaks the story's otherwise monotonous tone and flow. 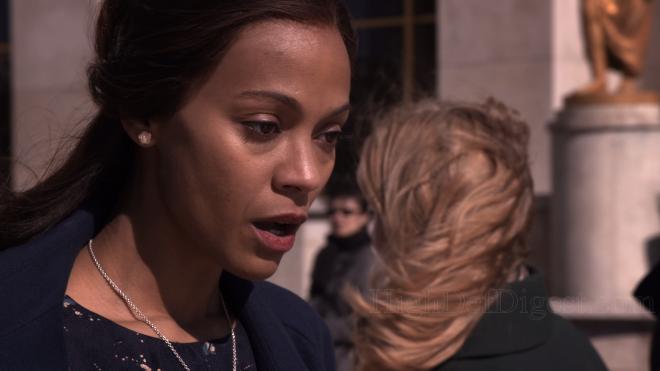 And unfortunately, there is a good amount of monotony in a tale about secret satanic societies that really should be more foreboding and moody. The problem is clearly not in Saldana, who slowly grows distraught with every new discovery concerning her neighbors or the building as a whole. Confiding in her best friend Julie (Christina Cole) and Commissioner Fontaine (Olivier Rabourdin) about the death of previous tenants and the creepy history of the building only makes Rosemary seem all the more unbalanced. The show's generally boring atmosphere is also not due to Holland, as she gets great performances from her cast, gradually building the tension despite the payoff largely feeling weak and of course predictable. The few action sequences demonstrate her talent for creating suspense with engaging visual touches that are decently thrilling.

Ultimately, the failure of 'Rosemary's Baby (2014)' starts at its conception, an idea possibly ripe for modernization that should have been aborted the moment its creators revealed their evil intentions of expanding Levin's book into two 90-minute episodes. Frankly, the story itself is the problem, taking much too long at hitting important plot points, those which loyal fans of the book and Polanski's film will immediately take note of, and superfluously delaying a climax that any reasonably intelligent viewer can guess from the title alone. Perhaps, just maybe, this could have been something interesting, given the performances and overall production, if the filmmakers had instead made the first episode on the first book and the second on its sequel, Son of Rosemary. Considering our current political climate, that would have been worth the labor of sitting through this painful delivery and end result.

Lionsgate Home Entertainment brings 'Rosemary's Baby (2014)' to Blu-ray on a Region A locked, BD50 disc, housed inside a blue, eco-cutout case with a flyer for an UltraViolent Digital Copy. After several skippable trailers, viewers are taken to a static menu screen with music in the background.

The miniseries moves into Blu-ray with a stunningly good 1080p/AVC MPEG-4 encode, but it comes with one minor caveat which sadly keeps it from perfection. Shot entirely on the Sony CineAlta 4K camera system, the freshly-minted transfer is razor sharp with distinct definition and clarity of the Parisian architecture and the furniture inside the apartment. Facial complexions appear natural and highly revealing, and the video shows excellent balance in the contrast and brightness. Although the 1.78:1 image still comes with a sterile, digital look, Michel Amathieu's cinematography remains attractive with striking, sumptuous primaries and warm, full-bodied secondary hues. Sadly, the presentation does suffer from the occasional banding and negligible posterization, but aside from that, the TV horror drama looks fantastic.

While not quite as good as the picture or nearly as impressive, the DTS-HD MA soundtrack is nonetheless a great complement and altogether satisfying. Considering its origins, it's not surprising the miniseries is a very front-heavy mix, but Antoni Komasa-Lazarkiewicz's score nicely broadens the soundfield with enveloping bleeds in the surrounds. The design does come with the occasional ambient effect, and although panning is mostly flawless, they are sporadic and easy to locate. The soundstage is really where the show succeeds with excellent channel separation and outstanding distinction in the mid-range. Low bass is responsive and quite potent in a few spots, adding depth to the music and action, while dialogue is pristine and well-prioritized in the center.

Starring Zoe Saldana as the eponymous heroine, 'Rosemary's Baby (2014)' is a two-part NBC miniseries that modernizes Ira Levin's 1967 novel but ultimately fails to conjure up a terrifying, disquieted atmosphere. Despite good performances and strong direction from Agnieszka Holland, the show is littered with several moments of dullness taking too long to reach the obvious conclusion. The Blu-ray, on the other hand, arrives with excellent picture quality and very good audio, but with being light in the bonus section makes the overall package enticing for the fans.

Sale Price 14.99
List Price 19.99
Buy Now
3rd Party 11.99
In Stock.
See what people are saying about this story or others
See Comments in Forum
Previous Next
Pre-Orders
Tomorrow's latest releases