Get ready for the rarely seen slasher classic from the 80s that may also be the most disturbing killer kids movies in grindhouse history: Three babies are simultaneously born in the same hospital at the peak of a full solar eclipse. Ten years later, these adorable youngsters suddenly begin a kiddie killing spree of stranglings, shootings, stabbings, beatings and beyond. Can the town's grown-ups stop these pint-sized serial killers before their blood-soaked birthday bash? K.C. Martel (E.T., Growing Pains), Joe Penny (Jake And The Fat Man), Michael Dudikoff (American Ninja), screen legends Susan Strasberg and José Ferrer, and MTV vixen Julie Brown whose nude bedroom dance remains a landmark of celebrity skin star in this still-controversial shocker from director Ed Hunt (The Brain, Diary Of A Sinner), featuring an HD transfer from the original vault elements.

At a time when the "slasher" was dominating the silver screen with different variations of the same plot, director Ed Hunt ('Plague,' 'The Brain') dared to deviate from the crowd with 'Bloody Birthday,' a corny twisted horror flick that sits pretty between delightfully warped and just plain bad. Essentially, Hunt and co-writer Barry Pearson retooled the very familiar formula with absurd paranormal undertones into a 'Village of the Damned' and 'The Bad Seed' type of silliness. Of course, with other movies featuring kids that kill, like 'The Children' and 'The Pit,' readily available around the same period, the concept was far from innovative for moviegoers. But what sets this little picture apart is the sick and prideful glee that a trio of kids take in their perverse actions.

It's easy to imagine the three grade-school tykes Debbie (Elizabeth Hoy), Steven (Andy Freeman) and Curtis (Billy Jayne) as younger versions of Jason Voorhees and Michael Myers. Except, those genre icons are better understood as acting out from an instinctual rage or a childlike obliviousness that needs to be institutionalized. But these kids, on the other hand, know precisely what they are doing and take pleasure from it. Lacking a sense of moral responsibility that verges on the psychopath, apathy is the real killer in a story where a total solar eclipse that also aligns with Saturn's position funnily serves as the explanation for the kids' darker personalities. Outlandish as it sounds, Hunt makes the idea work without his audience laughing out loud because the adult characters think it's also dumb and prefer to believe the killers' angelic faces over the truth.

Making the movie all the more comically eccentric is the filmmakers clumsily failing to mask them blatantly rip-offing John Carpenter's 'Halloween' and Sean Cunningham's 'Friday the 13th.' Joyce Russel (Lori Lethin) is practically the love-child of Laurie Strode and Alice Hardy, taking the virginal smarts of the former and mixing it with the naïve tomboy spirit of the latter. At one point, we even have a scene of Joyce, dressed in almost the same outfit as Laurie, carrying books in one arm while nonchalantly walking through her town. She's conveniently babysitting her little brother Timmy (K.C. Martel) as her friends die around her, and she's the one who figures out the cause behind their deaths. There are plenty more to mention, but what also raises an eyebrow is Arlon Ober's score with its high-pitched violin screeches every time some is brutally murdered. 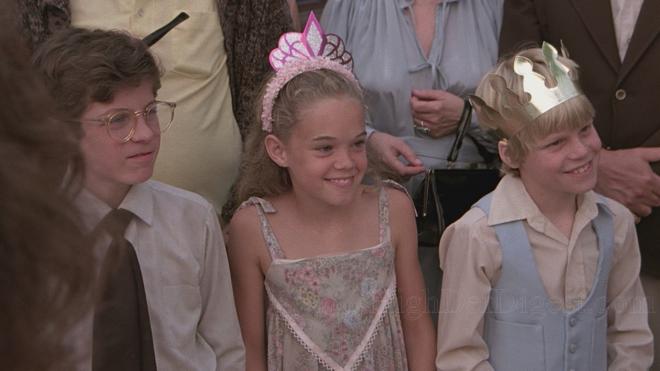 To the credit of Hunt and his team, the storyline's flagrant imitation, which largely feels like a hodgepodge of several other horror films, will be more noticed by hardened genre fans than the general public. Some might even argue that they are intentional allusions or acts of flattery. In either case, they actually make the movie a little bit more entertaining, sort of like playing a drinking game of "Name that Reference." And still adding a tinsy-winsy bit more value, at least for me, is seeing a very young Billy Jayne as the future role model for the NRA. After his little gun-toting stint here, he makes appearances in 'The Beastmaster' and 'Cujo,' but my favorite performance is his role in 'Just One of the Guys.' Better still is the soon-to-be irreverent comedian Julie Brown baring it all, satisfying the fantasies of those who ever wondered while watching her music video for "The Homecoming Queen's Got a Gun."

But in all seriousness, 'Bloody Birthday' is pretty bad filmmaking and darkly twisted in a really weird way, though still corny enough to entertaining those that can laugh at the badness. Intentional or not, the first kill with the two teens getting hot and busy inside a grave — literally, they jump inside the hole and are about to go all the way when they're interrupted by the evil kids — should have a few viewers laughing and shaking their heads. Today, it's just a silly little horror flick with a silly premise, but responsible for a few fond memories.

Severin Films brings 'Bloody Birthday' to Blu-ray on a Region Free, BD25 disc housed in a blue eco-elite case. The disc goes straight to the main menu at startup with music and full-motion clips.

Blu-ray is invited to the birthday party and walks through the door with a satisfying 1080p/AVC MPEG-4 encode (1.78:1). Although the source used definitely shows its age, bathed in that yellowish-tint that only comes with time, the overall picture quality is fantastic for a 30-plus-year old movie and is in great shape. Fine lines and objects are very well-defined and detailed, exposing every minute pattern in the wall paper, every thread and stitch in the clothing, and individual hairs with superb clarity. Sadly, there are a few scenes of very minor aliasing around the edges of various objects. Contrast is generally well-balanced and crisp, but highlights tend to bloom and expose negligible posterization. Black levels are in slightly better shape with excellent delineation within the shadows, and colors are bold, especially the primaries.

Unfortunately, the party never gets too wild or crazy with an uncompressed PCM soundtrack that's generally flat and uniform. True to the original design and recording, the action and music is understandably limited to the center channel where dynamic range largely feels restricted. It's not all that bad, but the higher frequencies lose a bit of clarity and tend to come off rather bright. The soundfield has a pleasing weight and a good sense of presence, thanks to a good, hearty low-end. However, it's not very engaging or ever feels broad, despite the excellent dialogue reproduction. In the end, it's an adequate lossless mix that gets the job done and is likely to please devoted fans.

At a time when the "slasher" was dominating the silver screen, director Ed Hunt dared to deviate from the norm with 'Bloody Birthday,' a corny twisted horror flick that's delightfully warped and just plain bad. The Blu-ray from Severin Films arrives with excellent video for its age, strong audio and a nice set of supplements, making it worth the asking price.

Sale Price 18
Buy Now
3rd Party 18
In Stock.
See what people are saying about this story or others
See Comments in Forum
Previous Next
Pre-Orders
Tomorrow's latest releases