When a powerful storm knocks Fly Creek, Georgia's power lines down onto wet soil, the resulting surge of electricity drives large, bloodthirsty worms to the surface-and then out of their soil-tilling minds! Soon, the townspeople discover that their sleepy fishing village is overrun with worms that burrow right into their skin! Inundated by hundreds of thousands of carnivorous creatures, the terrorized locals race to find the cause of the rampage-before becoming tilled under themselves!

Somewhat dismissed by its creator, Jeff Lieberman, and largely-forgotten, 'Squirm,' about a sleepy southern town besieged by miffed bloodthirsty, flesh-burrowing earthworms, is a 1976 creature-feature belonging to a subgenre that achieved a short-lived period of popularity. In the mid to late 1970s, studios rushed to theaters — or in many cases, simply greenlit to capitalize on a trend — a variety of stories having to do with nature and animals suddenly turning violent against humanity. Known as "natural horror," the best examples of these types of movies are those from the 1950s, such as 'Them!,' 'Tarantula' and 'Gojira,' where the carelessness of human progress and technology is the cause. Thanks to the massive box-office success of 'Jaws,' the subgenre resurfaced with wonderfully-bad little ditties 'The Food of the Gods,' 'Orca,' 'The Swarm,' 'Nightwing,' 'The Pack' and cult classics 'Piranha' and 'Alligator.'

Although in a similar vein as the Roger Corman-produced 'Attack of the Giant Leeches' from director Bernard L. Kowalski, Lieberman's movie amazingly stood out from the 'Jaws' rip-offs crowd by doing something slightly different and crawling underneath the audience's skin. It's nothing that caused an uproar or revamped the genre, mind you, but through its simple concept of worms wreaking havoc to the close-knit, peaceful town of Fly Creek, Georgia, the filmmakers accomplished lots with a limited micro-budget. Using live critters in every scene, specifically the cringe-inducing, borrowing and carnivorous Glycera worms which are otherwise disgustingly but appropriately named "bloodworms," Lieberman manages to make viewers writhe and wiggle in their seats. He does this by having the number of worms on screen slowly pile up from a few and a handful seeping through cracks to a revolting ocean and waves crashing down. 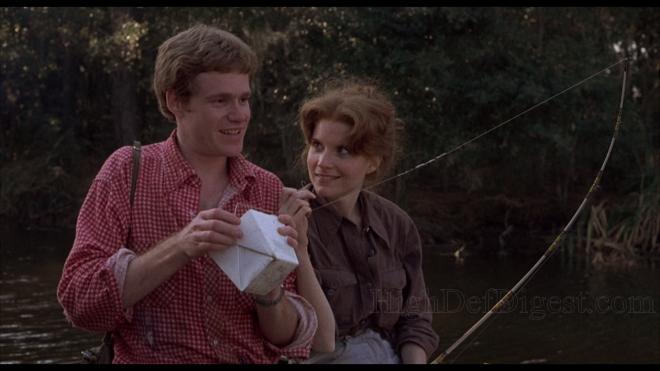 It's a shame, however, that the story — also written by Lieberman — is the production's major drawback, along with several of the silly performances. Supposedly taking inspiration from Alfred Hitchcock's 'The Birds,' another notable classic of the subgenre, Lieberman admittedly does an adequate job in selling his premise and succeeds at building towards a shockingly fun climactic finish. Worth mentioning are the worms turning bloodthirsty not due to radiation or harm caused to the environment, but because of a wind storm accidentally knocking power lines. Still, the characters are ridiculous stock caricatures, laughable, over-the-top stereotypes that can't ever be taken seriously, starting with the Sanders family (Patricia Pearcy, Jean Sullivan and Fran Higgins). Though comical, next-door neighbor Roger (R.A. Dow) is a buck-toothed cartoon while his hot under the collar father (Carl Dagenhart) can barely muster an intelligible sentence.

To their rescue from the horde of creepy-crawlies is the big-city outsider Mick (Don Scardino) — is there any other name more New Yorker than that? Only problem is that for the sake of characterization, the overtly-friendly redhead visiting the slightly shy Geri (Pearcy) is a bit of a wimp — you know, the reluctant hero type — who butts heads with Roger for the good country girl's affections and the irritable local sheriff (Peter MacLean chewing up every scene). The storyline is a very generic and predictable setup, but what maintains interest is the great special-effects work from award-winning makeup artist Rick Baker, especially the moment when Roger's face is suddenly attacked. In fact, Dow's performance is a great highlight, as the attack transforms the timidly mousy Roger into a crazed maniac, allowing for a few creepy instances in the second half. Ultimately saving 'Squirm' is the big finale, making the movie a cringe-inducing hoot.

Shout! Factory brings 'Squirm' to Blu-ray as a Collector's Edition under the distributor's Scream Factory line. The Region A locked, BD50 disc is housed inside a blue, eco-elite case with brand new reversible cover art and cardboard slipcover. At startup, viewers are taken to a basic menu screen with music and full-motion clips.

The cult 1976 shocker wiggles and writhes its way to the surface with a fantastic 1080p/AVC MPEG-4 encode, showing that the source is in excellent condition, especially for a low-budgeted, nearly 40-year-old movie. Each leaf on trees and every blade of grass are sharp while individual hairs and the stitching on clothes are plainly visible. Facial complexions are highly revealing and appear natural throughout, exposing the tiniest wrinkle and freckle. Richly-saturated colors brighten the 1.85:1 image, giving the whole presentation a nice, rejuvenated appearance. Contrast and brightness are very well balanced and stable with clean, crisp whites while strong, deep black levels provide noticeable depth.

Jeff Lieberman's 'Squirm' slithers its way to Blu-ray with a creepy-crawly DTS-HD Master Audio mono soundtrack that while mainly restricted to the center channel, manages to impress nonetheless. Although there are a couple negligible times when voices seem to be the result of ADR, conversation remain intelligible and clear from beginning to end. Imaging feels wide with an appreciable sense of presence, delivering excellent acoustical details and an extensive mid-range. The music of Robert Prince enjoys notable separation and distinction in the orchestration while certain intentionally high-pitched moments are clean without a hint of distortion. Low bass is appropriate and fitting, making this a fun lossless mix.

'Squirm,' about a sleepy southern town besieged by miffed bloodthirsty, flesh-burrowing earthworms, is a 1976 creature-feature belonging to a subgenre that achieved a short-lived period of popularity. The Blu-ray arrives with an excellent audio and video presentation and a decent assortment of supplements. The Collector's Edition of the movie from Scream Factory is one for the fans.

Sale Price 64.92
List Price 79.99
Buy Now
3rd Party 64.92
In Stock.
See what people are saying about this story or others
See Comments in Forum
Previous Next
Pre-Orders
Tomorrow's latest releases