A ship docks fresh from Somalia which contains one infected worker that passes unnoticed into the very heart of India's overpopulated bustling streets, setting off an unstoppable chain of events. Meanwhile, American turbine engineer Nicholas Burton (Joseph Millson,Casino Royale) is working in the stark yet tranquil Indian countryside when he receives a call from his love Ishani (Meenu), a local girl who lives on the outskirts of the slums of Mumbai and who has hidden their relationship from her tradition-minded father. She reveals she is now pregnant and scared for her life as chaos and terror have taken ahold of the cities as the dead return to life and attack the living. Nicholas has to battle his way across their 300 mile landscape filled with flesh-eating – and infectious – undead. With the help of young street kid Javed (Anand Goyal), he has to rely on his wits and sheer brute force to try and save them all, as the clock ticks off the minutes before the last flight out of a living hell...

After a very brief exchange at some undisclosed harbor that quickly brushes off the need for a detailed explanation — an Indian man was bitten while in Africa during a virus outbreak — 'The Dead 2' jumps into zombie pandemonium in a matter of a few minutes. The same night loved ones mourn the passing of that man, he returns with a gang of the walking dead already assembled. The scene is so nicely done and well-developed that it's nearly beautiful to watch, not so much the blood, guts and agonizing screams as the camerawork, the cinematography, and the rhythmic editing. The dead slowly creep from the shadows, dressed in funeral garb, with crystal-blue eyes that shine brilliantly from the frightful darkness. Even prior to that, the cinematography of Jon Ford, who also serves as co-writer and co-director, is a stylish and tasteful display of dazzling elegance that deliberately contradicts the plot's core of impending apocalypse.

This is one of the better and more impressive aspects of the sequel, which sees the Ford brothers returning to what has grown into a worldwide phenomenon for genre fans and zombie junkies. But as is always the case, the follow-up suffers from the sequel curse, where the second feature is simply no match to the first. In fact, the storyline is much of the same — nearly identical, to be perfectly honest. Two complete strangers and polar opposites in every way imaginable must travel through a desert landscape overrun with reanimated corpses and grow to be close friends over the course of their perilous journey. At the same time, the nice twist to the Ford flicks, which amusingly function as restrained love letters to George A. Romero's 'Living Dead' series and the classic plodding zombie, is that the privileged white man is the foreign stranger on unfamiliar land and whose survival is dependent on someone else. 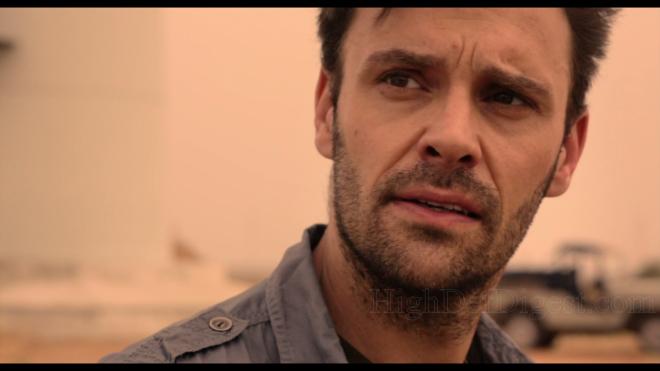 Here, that man is played by British actor Joseph Millson of '24: Live Another Day' fame, doing an excellent job as American electrical engineer Nicholas Burton. Working on wind turbines in India, mayhem rapidly ensues around him the morning he receives news his girlfriend Ishani (Meenu Mishra) is pregnant, a surprise announcement not joyously welcomed by her somewhat narrow-minded, sectarian father (Sandip Datta Gupta). That same night, he rescues the cleverly resourceful Javed (Anand Krishna Goyal) from a horde of the glassy-eyed dead, and the two decide to make the 300-mile pilgrimage across sun-scorched Indian deserts. It doesn't take much to see part of the homage to Romero's dead franchise is the sibling filmmakers using zombie catastrophe for a larger metaphor. For Nicholas, a reason to celebrate also marks the end of the world as he knows it while his little companion affords him the opportunity to confront his doubts, demons and discover he can be a good father.

'The Dead 2: India' plays much like its predecessor, including stunning panoramic photography of the desert landscapes with spectacular detail, but the Ford brothers manage to provide just enough style and uniqueness to still feel like a follow-up all of its own. Of course, the plot comes with a few trappings and drawbacks which hinder its constructed reality  —vehicles conveniently not starting or ruining so as to force our leads to walk, bullets seem endless despite taking note of seeming low and the narrative is predictable in spite of a final emotional twist. Nonetheless, the sequel remains and should rank as one of the best zombie features in recent memory. While other movies either go for over-the-top humor ('Cockneys vs. Zombies') or focus more on the gore over an engaging plot, the Ford brothers' films are a breath of fresh air, with thoughtful, appealing stories amongst the gruesome, gory details.

Starz/Anchor Bay Entertainment brings 'The Dead 2: India' to Blu-ray on a Region A locked, BD25 disc inside a blue eco-cutout case. At startup, viewers are taken straight to the main menu with full-motion clips and music.

Thesequel debuts on Blu-ray with a fantastic 1080p/AVC MPEG-4 transfer that's a slight improvement over its predecessor.

Shot entirely with the use of HD cameras, the 1.85:1 image comes with that sterile, digital appearance I usually find unattractive. But thankfully, Jon Ford's cinematography offers just enough style and creativity to nonetheless impress with often stunning razor-sharp details of the desert landscapes. Flesh tones are healthy with visible pores and wrinkles in the cast, and various imperfections of the poverty-ridden homes are distinct. The color palette displays sumptuous, vivid primaries while richly-saturated secondary hues provide warmth and beauty to the mayhem.

Black levels are inky rich throughout with deep, penetrating shadows that never ruin the finest details and provide a great deal of dimensionality. Contrast is also spot-on for the most part with brilliant whites, but several scenes unfortunately comes with blooming hot spots and reveal a tad of posterization. Added to that, very mild banding is at times plainly visible, making this a great high-def transfer but still short of perfection.

The zombie flick attacks with an equally smashing and excellent Dolby TrueHD soundtrack that energizes the room with the pandemonium of disaster and panic. Rear activity provides subtle discrete effects with great, sometimes immersive directionality and fluid panning. Whether it's the sounds of helicopters flying overhead or the echo of gunfire, the design offers a terrifically expansive and satisfying soundfield, though in the height of the mayhem, everything suddenly feels focused in the fronts.

Nevertheless, the soundstage is wide with a clean, room-penetrating mid-range and outstanding acoustical details. Every gruesome bite and death growl is heard without issue, and the skin-crawling sound of flesh being torn apart is perfectly audible every time. Dialogue is precise and distinct in the center, delivering every dramatically poignant moment with emotive clarity. Most surprising is a powerful low-end that resonates throughout the room with several gratifying, couch-vibrating moments and weighty accurate response (bass graph), making this lossless mix a fun and exciting ride.

'The Dead 2: India' plays much like its predecessor, including stunningly detailed panoramic photography of the desert landscapes, but the Ford brothers manage to provide just enough style and uniqueness to still feel like a follow-up all its own. Where other genre flicks fail, this sequel ranks as one of the best zombie features of recent memory with a smart, thoughtful story to go along with the gruesome, gory details. The Blu-ray arrives with a great audio and video presentation, yet lacks in the bonus department. Nonetheless, the overall package should satisfy loyal genre fans while others will be happy with a rental. In the end, this is definitely worth a look.

Sale Price 12.63
List Price 17.99
Buy Now
3rd Party 11.95
In Stock.
See what people are saying about this story or others
See Comments in Forum
Previous Next
Pre-Orders
Tomorrow's latest releases