A stranger attempts to convince a happily married couple that their daughter is actually his daughter reincarnated.

Not even ten minutes into it, 'Audrey Rose' lays on the suspense and tension with a violent car accident that ends with a fatal fire, followed some time later by scenes of a creepy middle-aged man stalking a mother and her daughter, his intentions kept unpleasantly mysterious. Sporting a hilariously bad mop of a hairpiece and a full beard that curiously looks fake, the man is future Oscar-winner Anthony Hopkins ('The Silence of the Lambs'), spending the first few minutes in silence except for a rather disquieting stare and eerily standing on street corners. When we finally hear his voice on the other end of a phone call, which he placed to the family inquiring about the little girl's health, there is a soothing calmness and saneness to his voice that nicely adds apprehension and an unease of where it'll go next. Sadly, with his purpose revealed over a dinner with the parents, the story takes a sharp turn into far less suspenseful territory.

Regardless, director Robert Wise handles the production with expertise and a proficiency that only a veteran filmmaker like himself could accomplish, turning humdrum material — and frankly, a rather unexciting subject matter for the genre — into something at least somewhat entertaining. And why wouldn't he have the talent for it? After all, this is the same man who's worked on such unassailable classics as 'Citizen Kane' and 'The Magnificent Ambersons' before turning his eye to directing 'The Day the Earth Stood Still,' 'West Side Story,' 'The Sound of Music' and the first 'Star Trek' film. He takes an interesting approach with this film where exposition is a cursory hurdle and simply jumps into making his audience uneasy before disclosing a plot that is in actually nowhere near scary. And so it is that the film's failure and drawback is not in the performance of the star or the director, but ultimately the fault lies on the story itself. 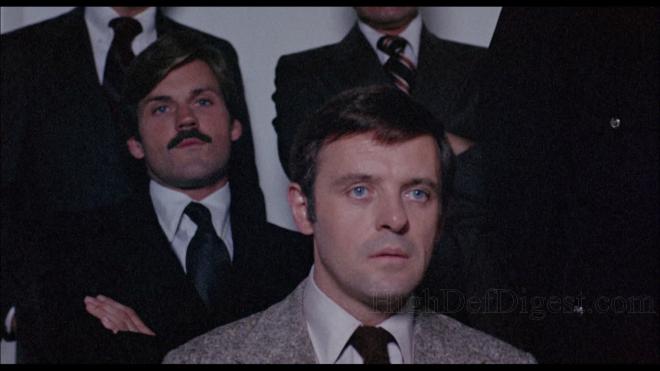 Author Frank De Felitta adapts his own 1975 supernatural novel, and it's rather a faithful take, which is probably not surprising, closely following events and sequences with little bias or respect for motion pictures as a completely different storytelling medium. That, in itself, is not the film's downside, but the lack of a consistent emotional tone is, meaning that De Felitta wants the plot to be both a heart-rending tale about the loss of a child, which is where Hopkins's talents complement the production well, and an honest, discerning conversation on reincarnation. The story starts creepy and atmospheric but soon abandons that once it's explained the mysterious Elliot Hoover (Hopkins) believes his Audrey Rose was reborn in little Ivy (Susan Swift). Understandably, concerned parents Janice and Bill (Marsha Mason and John Beck) are not only skeptical but defensive and quick to protect their daughter from the seemingly unstable man.

This is all well and good with Wise keeping his audience decently engaged and demonstrating his skills behind the camera — a particularly excellent moment is when Janice struggles with Ivy during one of her night terrors and we follow the action from the second floor to the first in silence from outside the window. But much like we doubt the sanity of Hopkins's character, 'Audrey Rose' suddenly goes a bit wacky and into the deep end, making viewers question what the filmmakers were thinking. The movie goes from intriguing exploration on a paranormal phenomenon that may explain Ivy's sleeping condition to a very dull courtroom drama. Like others that quickly capitalized on the success of 'The Exorcist,' 'Audrey Rose' shares in that attempt, but is clearly in response to it, aiming to somehow to legitimize a spiritual belief rather than terrify. Unfortunately, the effort to coalesce supernatural horror with a more serious dramatic tone leaves us with a psychological melodrama better suited for television.

Robert Wise's 'Audrey Rose' comes to Blu-ray as a Limited Edition release courtesy of Twilight Time. The Region Free, BD50 disc is housed in the standard blue keepcase accompanied by an eight-page booklet with an essay written by screenwriter Julie Kirgo. At startup, the disc goes straight to a static menu with the usual options.

Robert Wise's psychological drama is reborn on Blu-ray with a solid 1080p/AVC MPEG-4 encode that pleases for the most part, though the overall presentation is far from exceptional.

The source used is in fairly good condition with several strong, well-defined sequences, some better than others, and a consistent, film-like grain structure, yet the print is riddled with the occasional white spots and dirt. While faces are decently revealing, clothing nicely detailed and random household items plainly visible, much of the presentation is softer and poorly-resolved than what would be expected of the format. Contrast and brightness are steady and stable with clean, crisp whites, but blacks could be stronger, often wavering between true and murky. Primaries benefit the most and are bold saturated, but secondary hues tend to fall flat, frequently making the 1.85:1 image look somewhat bland and aged.

'Audrey Rose' cries for help with a generally satisfying DTS-HD Master Audio mono soundtrack, but sadly, she doesn't find the sort of salvation and deliverance fans and producers had probably hoped for. Although the original design is already restricted on its own, meaning there isn't much activity and action in the recording to offer a whole lot, the lossless mix makes these limitations all the more obvious. On the whole, dynamic range is ordinary and somewhat lackluster, yet there is distinct clarity and clean separation in the mids. At times, there is a strange wobbling effect in Michael Small's score and the music is boringly narrow. Dialogue may be intelligible, but certain conversations are hollow with an obvious disconnection, almost like a bad lip-sync. Lacking the smallest hint of bass, the high-rez track gets the job done with some mild disappointment.

Aside from a pair of trailers, this is a barebones release.

Although director Robert Wise handles the production with expertise and a proficiency, complemented by an excellent performance by Anthony Hopkins, 'Audrey Rose' is a horror drama that can't seem decide which it prefers, commencing with a creepy atmosphere that suddenly delves into a courtroom melodrama better suited for television. The limited edition Blu-ray from Twilight Time arrives with a generally solid audio and video presentation but is lacking in the bonus department. For devoted fans of the director and genre, the overall package is worth the upgrade, but even the most curious will likely want to wait or hope for a stronger release.