Biographical story of the rise from nowhere of early rock and roll singer Ritchie Valens who died at age 17 in a plane crash with Buddy Holly and the Big Bopper.

Growing up in Los Angeles during the 80s, the life and music of Ritchie Valens was already a well-known story within the Latino and Chicano communities long before 1987's biopic 'La Bamba,' titled after the young musician's most successful, chart-topping rock 'n' roll song. In the early part of the decade, America was going through one of its 30-year or so nostalgia trips, in which fashionable trends of decades past are revisited with wistful remembrance. (It's an interesting cultural phenomenon in sociology, and more can be read here, here and here.) So, it was not unusual or surprising that Valens' music, along with other rock legends, was listened to or readily available. However, for Hispanics, the tale of his rise from field worker and the ghetto neighborhood to famous rock star was one of legend. For immigrants desiring their children success, Valens' notable life was evidence that the American Dream is possible.

Older generation Angelinos were familiar with the young man's sudden ascent to fame, his unexpected overnight success coming just as quickly as it went only eight months after signing with Del-Fi Records. But for us youngsters growing up on his music and turning another one his hits, "Donna," into a love anthem dedicated to our girlfriends, it was a tragic tale of a talented 17-year-old boy whose life was cut short. When adapting the story, with the full support of the Valenzuela family, writer and director Luis Valdez seemingly approached the subject aware that many people only knew of Ritchie Valens, the renowned Chicano rock 'n' roller who actually made it, but very few were familiar with the person or his personal struggle. As if with a desire to humanize the legend, Valdez wrote a script that placed more emphasis on Valens' meager beginnings and his family dynamic, as well as celebrating his pioneering and influential music. 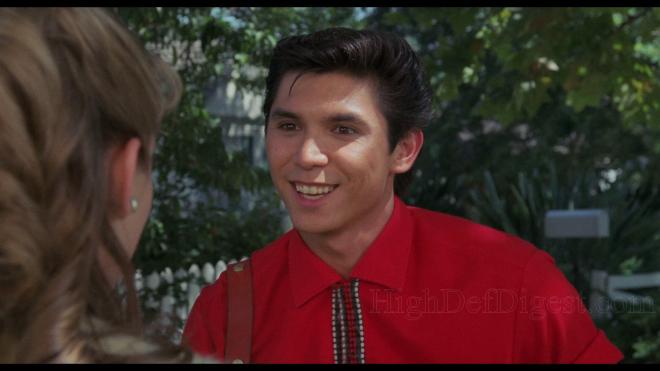 Valdez directs the film with careful attention on the somewhat fragile yet resilient relationship of Valens (a very young Lou Diamond Phillips in his breakthrough performance) and his brother Bob (a convincingly tragic and troubled Esai Morales). The two actors display amazing chemistry and electrify the screen with their volatile friction of sibling rivalry, more so on the part of the older brother, who labored to make an honest living after his release from prison but only found himself chasing after the easy, often criminal-related money. At the center of Valdez's plot is this unnecessary contest between the two men for their mother's affection, though for Bob, it was also a deep psychological desire to win her approval. Really drawing audiences into the story is Morales's portrayal of a son feeling like a failure while his younger brother does for the family what he agonized to accomplish. All the while, Valdez never loses focus on Valens and how this brotherly bond affected and even inspired the musician.

Of course, this was not the only relationship which motivated Ritchie Valens, and in 'La Bamba,' Valdez gives ample time and attention to other key players in Valens' tragically short-lived career. His mother Connie (Rosanna DeSoto) is the supportive angel that believed so much in her son's talent that she unwittingly feeds Bob's lack of confidence and low self-esteem, further driving his alcoholism and abuse of his naïve wife Rosie (Elizabeth Peña). Then, there's Donna Ludwig (a good but still a bit average Danielle von Zerneck), the high school sweetheart who became the inspiration behind a couple of Valens' songs. Joe Pantoliano also stars as Del-Fi Records owner Bob Keane who discovered Valens. With minor but memorable cameo appearances by radio DJ and personality Rick Dees and Brian Setzer of the rockabilly band Stray Cats, 'La Bamba' is a superbly entertaining biopic that for those who grow up on Valens' music humanizes a legend into an inspiring tale of making dreams come true.

Luis Valdez's 'La Bamba' comes to Blu-ray as a Limited Edition release courtesy of Twilight Time. The Region Free, BD50 disc is housed in the standard blue keepcase accompanied by an eight-page booklet with a thoughtful essay written by screenwriter Julie Kirgo. At startup, the disc goes straight to a static menu with the usual options.

Luis Valdez's rock biopic takes the Blu-ray center stage with a fantastic 1080p/AVC MPEG-4 encode that exceeds expectations. The source used for this high-def transfer appears to be in excellent condition with nary a scratch or hint of wear and tear, providing a beautiful video presentation that reveals every pore, wrinkle and negligible blemish in the faces of actors. Fine lines and objects are very well-defined with lifelike textures in the costumes and healthy facial complexions while the 1.85:1 image is awash with a thin layer of grain, giving it an appreciable film-like appeal. Contrast is spot-on and well-balanced, and black levels are true and accurate throughout. Primaries really shine with bold richness while cleanly-rendered secondary pastel hues provide warmth.

Fans can rock out to an outstanding 5.1 DTS-HD Master Audio soundtrack that'll have everyone in the house jumping to their feet and dancing. Although the original design was in stereo, this new remix remains a front-heavy presentation and surprises with a broad and welcoming soundstage the makes every rock 'n' roll tune feel like it's right in the room. On occasion, a few atmospherics bleed into the surrounds, nicely expanding the soundfield, but for the most part, the up-mix is faithful to the original recording. Dynamic range is clean and highly-detailed with distinct separation between each note and instrument, and low bass is appropriate with a pleasant punch to the music. With precise, intelligible vocals in the center, this lossless mix is the perfect match for the video.

With minor but memorable cameo appearances by radio DJ and personality Rick Deees and Brian Setzer of the rockabilly band Stray Cats, 'La Bamba' is a superbly entertaining biopic. Starring Lou Diamond Phillips in his breakthrough performance, the film is a tale for those who grow up on Ritchie Valens' music and humanizes a legend into an inspiration. The Blu-ray from Twilight Time arrives with a strong and very satisfying audio and video presentation. Though lacking in bonus material, the overall package is worth the price for fans of both the film and Valens.