A journalist, down on his luck in the US, drives to El Salvador to chronicle the events of the 1980 military dictatorship, including the assasination of Archbishop Oscar Romero. He forms an uneasy alliance with both guerillas in the countryside who want him to get pictures out to the US press, and the right-wing military, who want him to bring them photographs of the rebels. Meanwhile he has to find a way of protecting his Salvadorean girlfriend and getting her out of the country.

By 1986, Oliver Stone had already won an Oscar (arguably undeserved) for writing the screenplay to Alan Parker's 'Midnight Express' and had scripted big movies like 'Scarface' for Brian De Palma and 'Year of the Dragon' for Michael Cimino. Nevertheless, Oliver Stone was not yet the Oliver Stone, the equally celebrated and reviled filmmaker whose movies (if not his very existence as a human being) would go on to polarize audiences and political pundits for decades. Although rarely brought up as one of his signature efforts, 'Salvador' was Oliver Stone's first movie in the sense of being an Oliver Stone Film, and was a huge turning point in his career.

Previously, Stone had directed two feature films, both schlocky low-budget horror flicks, one of which he disowned. Looking back, both seem like little more than proof-of-concept exercises to demonstrate that he was capable of putting a movie together. In comparison, 'Salvador' leaps forward as a fully-formed expression of Stone's voice as a filmmaker. It's a politically charged story based on real events, told in raw, uncensored and unrestrained fashion and filled with fiery indignation. For a movie made on a shoestring budget, it's also a rather bravura piece of directing that feels much larger than the actual production could have possibly been.

Set in 1980, James Woods stars as burned-out photojournalist Richard Boyle, a fast-talking sleazeball whose career and family life have both imploded, leaving him broke and briefly homeless. The type of guy who's always playing an angle somewhere, Boyle cons his only friend, a dipshit former radio DJ called Doctor Rock (Jim Belushi) into handing over his own last remaining dollars and joining Boyle on a road trip to Central America, where Boyle hopes to pick up stringer work covering the bloody civil war then raging in El Salvador. He actually stands a decent chance of that, given that the country is a war-torn hellscape of untold dangers that the American public is almost totally oblivious to and apathetic toward. Only a lunatic thrill-seeker would actually want to go there of his own volition, while all the respectable American journalists stay home to cover the Reagan/Carter Presidential election. Somebody's got to try to document the story, and who else is gonna do it?

Taking a page out of Hunter Thompson's 'Fear and Loathing in Las Vegas', the Gonzo journalist and his druggie enabler friend initially tear through the country, drinking and whoring through the chaos around them, and generally behaving like massive unrepentant assholes. Boyle makes every effort to ingratiate himself with both corrupt military officials and guerilla rebels who can get him access to good photo opportunities in exchange for favorable coverage. Eventually, however, the abject horror of the place – with its death squads and mass graves and sudden assassinations and violent combat in the streets – gets to him. If it doesn't quite sober him up, the gravity of the situation at least makes him angry – angry that the American government has not just failed to intervene but has actually inflamed the conflict out of a bullshit fear of Communist incursion, and angry that the public back home just plain doesn't give a shit about the genocide happening below its borders.

Yes, 'Salvador' is a message movie, and subtlety is not a trait that Oliver Stone would ever be known for. The story can get a little preachy and heavy-handed, but the film is an impassioned, harrowing work of moral outrage. The characters are complex and flawed, and Stone isn't afraid to sometimes make them downright unlikable. As much as he seems to enjoy rubbing audiences' noses in the dirt and sweat and danger of the setting, the verisimilitude he conjures is often astounding. How he staged some of these scenes for little to no money is a feat of directorial magic that filmmakers far more experience could never pull off.

James Woods is deliciously smarmy and dickish, and ultimately sympathetic, as Boyle. By virtue of his talent, he makes the fictionalized character more charmingly assholish than the real Richard Boyle seems to have been. Meanwhile, Jim Belushi, an actor who would later be known for his lazy insufferability, actually tries to deliver a legitimate performance here (one often uncomfortably based on his real brother's spiral into druggie oblivion). It's quite an achievement that he's not only tolerable in the movie, but perhaps even good.

'Salvador' was produced by the Helmdale Film Corporation, a small studio that wasn't able to give it sufficient distribution or promotion at the time. The film was released in early 1986 and, despite some very positive reviews from critics, disappeared quickly and lost money. Almost immediately as soon as production wrapped, Oliver Stone jumped right into 'Platoon', the movie that would be regarded as his first masterpiece. The wild success and acclaim of that picture overshadowed and essentially swallowed 'Salvador' whole. Nonetheless, even as 'Platoon' walked away with a host of Oscars the following year, 'Salvador' was surprisingly also recognized with nominations for James Woods as Best Actor (he lost to Paul Newman) and Oliver Stone for Best Original Screenplay (competing against himself, and lost both to Woody Allen).

Oliver Stone would go on to both great successes and dire lows. Today, 'Salvador' is rarely even brought into the conversation when discussing the man behind 'Platoon', 'Born on the Fourth of July' or 'JFK', but it should be. It's a vital work in the development of an important artist, and remains a genuinely good film about a subject that still deserves more attention. 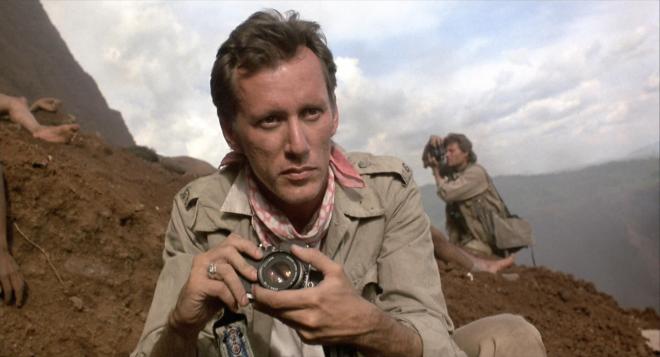 'Salvador' comes to Blu-ray from Twilight Time, under license from MGM Home Entertainment. The disc is a limited edition with a pressing run of only 3,000 copies. Like most Twilight Time releases, the Blu-ray has a boring static menu.

Once you get past the opening credits montage, which is sourced from low-res archival news footage, early scenes in the movie are almost startlingly crisp and detailed. Even Oliver Stone mentions being surprised by this in the audio commentary, and I'm pretty sure he was watching the old DVD edition back when that was recorded. The first shot of James Woods in his apartment is really striking, and later scenes where he drives through San Francisco feel like stepping back in time to the city in the early 1980s.

As the action progresses to Central America, the filmmaking becomes noticeably rougher, grittier and grainier. That's both a factor of practical necessity (most of the movie was shot in seat-of-their-pants guerilla fashion) and is thematically appropriate for the story. The Blu-ray's 1080p/AVC MPEG-4 transfer is a very straightforward scan of quality film elements without any digital mucking around. Film grain is preserved and handled appropriately. Colors look good. If night scenes look a little washed out or excessively grainy, that's most likely an inherent trait of the original photography. Even if the rest of the movie isn't nearly as vibrant as the opening, it's always satisfyingly detailed.

The lack of digital processing also means a lack of clean-up work. Minor specks and dirt appear routinely, and the end credits have a scratch down the side of the screen. Fortunately, issues like this are generally minor and forgivable.

The image is presented in its theatrical 1.85:1 aspect ratio with tiny letterbox bars at the top and bottom. 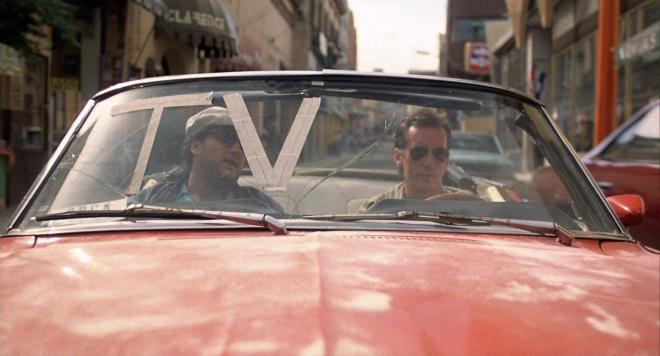 The Blu-ray offers the movie's soundtrack in two options: the original mono or a 5.1 remix. Both are encoded in lossless DTS-HD Master Audio format. While purists may embrace the mono version, that track sounds very weak and constrained. I found the 5.1 mix to be stronger and livelier. The music (possibly remastered from the original stereo recordings) has nice breadth and presence.

Attempts to expand the soundstage to the surround channels are applied only sparingly and tastefully. A helicopter pan is nicely done. Gunshots are crisp and occasionally reverberate through the room. While 'Salvador' will never be mistaken for a big-budget action flick, the movie's climax, with lots of rumbling tanks and booming explosions, is pretty effective.

On the other hand, the dialogue channel is often weak and sometimes scratchy. Aside from the climax, the soundtrack's dynamic range isn't particularly impressive.

Ultimately, 'Salvador' is a low-budget movie in which the director made the best of his limited resources. It sounds about as good as it probably ever could. 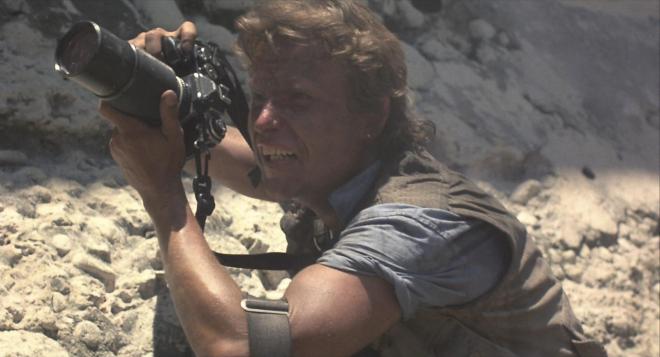 Twilight Time's Blu-ray carries over most of the bonus features from MGM's DVD edition that was originally released in 2001. 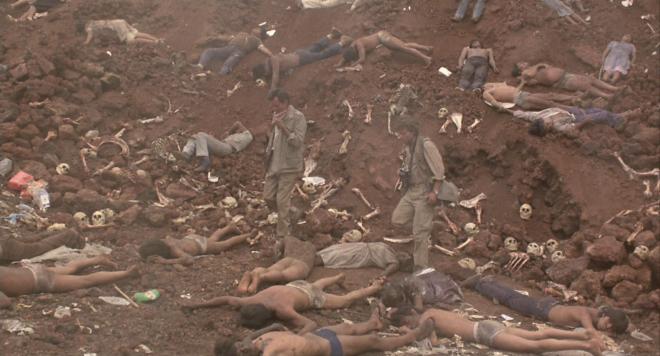 New to the Blu-ray are the following:

The old DVD edition had a photo gallery that didn't get ported to Blu-ray. It's not much of a loss.

Even though 'Salvador' is frequently forgotten when talking about the great films in Oliver Stone's career, the movie was a hugely important milestone in the director's development as an artist and still holds up as a powerful piece of work today. The Blu-ray from Twilight Time has good video and audio, and a few interesting supplements. Recommended.