The original poster for 'The Killer Elite,' Sam Peckinpah's 1975 muscle-y action/revenge feature staring James Caan and Robert Duval, reads like a want ad: "Men Wanted. Private Company with C.I.A. contract seeks men willing to risk life. Perfect physical condition. Experience with weaponry, incendiaries, Karate/Judo. No loyalties. No dependents. Long career doubtful." There's little doubt the fictional ad perfectly encapsulates the story of two mercenaries on the outs with one another (and their shady company). But the ad also serves as a definitive persona of the ideal audience member, one that was perhaps created by the marketing firm hired to promote the film to adventure-seeking alpha males who like their heroes tough as nails and their women subservient and semi-clothed.

This is the kind of testosterone-fueled entertainment that is ambiguous about how seriously it takes itself when ninjas inexplicably show up to a gunfight. Those intentions may be obfuscated to a certain degree, but amidst all the machismo and toxic masculinity that's on display is charmingly earnest when matters of manly appreciation for truth and trustworthiness in equally manly relationships become its focal point. To put it plainly: This is a film about men, the kind of men who see the world as one conflict after another deserving of their attention. But the toxic part manifests when it becomes clear these men aren't looking to get involved in these conflicts to shepherd in some kind of resolution. They simply want to be a part of the fight; they just want to go where the action is.

The exploration of men who constantly seek conflict, is a fascinating one that sees 'The Killer Elite' – which has positioned itself as an action adventure flick – transform into a soap operatic workplace drama; the kind with a lot of gunplay, semi-clothed woman, and, well, ninjas. There's a professional competitiveness between Caan and Duval that's rears its head in an ugly way early on when Duval's George Hansen betrays Caan's Mike Locken, while he's wearing nothing more than a towel. Out of professional (and emotional) courtesy, Hansen settles for permanently maiming his former colleague (and by all other accounts, hetero lifemate) rather than killing him, shooting him in his elbow and knee. 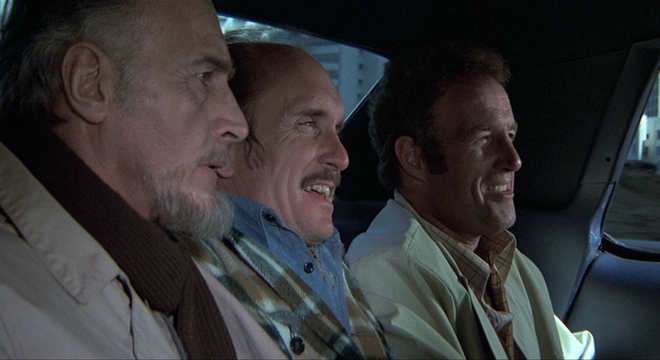 While Locken convalesces – taking full advantage of the lovely nurse at his bedside, as manly men who risk their lives for a living are wont to do – it becomes clear that the sense of disgrace has wounded him more severely than the bullets that ripped through his flesh and shattered his bones. Locken has suffered a humiliation, been bested by a man he mistakenly thought of as his friend. What's worse, Hansen's professional career has increased its market value, as a result of Locken's debilitation. The subtext, then, becomes painfully obvious: It can ruin a man to watch as his friends succeed, while he fails.

At this point in Peckinpah's career, such a scenario might have been far more apt than anyone at the time might have been aware. Desperate for another box office success, like 'The Getaway,' the director turned to 'The Killer Elite' as a way to bring his brand of cinematic machismo to the screen and rejuvenate his lagging career. However, production was stymied by allegations of the director's troubles with drugs, which were exacerbated by news of his declining health. There were on-set troubles during filming as well, which started with the studio's refusal to let Peckinpah rewrite the script, and ended with allegations that the director let other units take control of many directing responsibilities. The end result was a moderate box office hit nonetheless suggested Peckinpah's best days were behind him.

And it's easy to see why. At 123 minutes, 'The Killer Elite' is far too bloated. The film is uneven and it's pacing is questionable. Perhaps the run time wouldn't have been such an issue had it managed its various threads with more emphasis on the relationship between Hansen and Locken, rather than trying to turn the film into an "against the odds" story that is entirely too focused on Locken's triumph over physical adversity. In that regard, Duval manages to make a splash early on, only to be all but forgotten when the film reaches the third act, shifting gears once again to become a paranoid conspiracy thriller the likes of which Peckinpah would revisit seven years later in the 1982 adaptation of Robert Ludlum's 'The Osterman Weekend.' Other actors wind up being wasted, too, as small parts given to Burt Young and Bo Hopkins, who previously worked with the director on 'The Wild Bunch,' underutilize them by limiting their characters' depth to little more than their preference in weaponry.

Despite all this, the film does have some qualities. It is brilliantly edited at times – especially during the final, ninja-filled showdown at a naval shipyard for decommissioned war vessels – and the score by Jerry Fielding does offer some rousing moments. But overall, the many disparate parts never coalesce into a convincing whole. 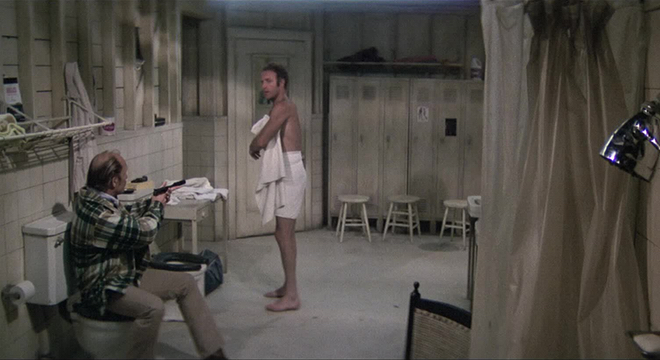 'The Killer Elite' comes from Twilight Time as one of 3,000 copies. It is a 50GB disc in the standard keepcase. As per usual, a small booklet featuring an essay by film critic Julie Kirgo accompanies the disc.

'The Killer Elite' has been given a very sharp, detailed, and vivid transfer that maintains the inherent qualities of film from the '70s, while dressing it up for a beautiful presentation on modern television screens. Fine detail is strong throughout, delivering tremendous-looking facial features, clothing textures, and background elements. Color is also bright and vivid, without being over saturated or looking like it had been too heavily processed and corrected. The sky can tend to look a little too blue at times, but it adds to the film's San Francisco setting and doesn't distract too much.

Contrast is also strong, offering incredibly rich, full-bodied blacks with no hint of crush or banding anywhere. White levels can run a little hot from time to time, but there is evidence to suggest this was deliberate. Some traces of grain are present through most of the film, but it is slight and only serves to enhance the filmic quality of the movie's presentation.

Overall, this is a gorgeous transfer that does well by the film.

The DTS-HD Master Audio 1.0 track is rather disappointing. The sound lacks any kind of emphasis or power, as dialogue is low and often difficult to hear. The improper balancing worsens the problem, which results in Fielding's exciting score sounding blown-out at times as the volume is often adjusted to compensate for the anemic dialogue.

Still, there are some plusses to the mix. Although dialogue and music don't really get along too well, the sound effects come through nicely. Gunfire is strong and packs a punch when it needs to, and even delivers some surprising depth, as shots sometimes ring out and create echoes, depending on the setting. There isn't much atmospheric sound to speak of, but the occasional din of, say, Chinatown or a busy San Francisco street does offer a somewhat complex sound design that the mix uses to surprising extent.

The mix misses the big picture, by delivering weak dialogue, but it's not a total loss as sound effects resonate and help make this action film a little more convincing.

Passion and Poetry: Sam's Killer Elite (SD, 28 min.) - A great mix of behind-the-scenes featurette and a look back at the career of Peckinpah and the eventual lack of interest the public and Hollywood had in him. It paints 'The Killer Elite' as a last ditch effort by Peckinpah to have a late commercial success.

Promoting 'The Killer Elite' (SD, 4 min.) - A look at the posters and other promotional material used in the U.S. and internationally.

Although it is not a complete failure, 'The Killer Elite' struggles to keep its story of triumph over adversity and betrayal coherent with its bizarre governmental conspiracy storyline. The odd domesticity of Caan's rehabilitation and the ever-disheveled appearance of Burt Young fail to work against the backdrop of clandestine C.I.A. operations and global conspiracies. This might have seemed like the perfect manly picture on paper, but on celluloid these men don't quite elicit feelings of the word "elite." With great picture, disappointing sound and some very interesting features, this mixed bag is worth a look.