The high seas have never been more terrifying than in this riveting, tension-packed adventure. HMS Britannic is caught in a storm at sea. But the real terror is on board - seven bombs planted by a terrorist calling himself Juggernaut, who demands a high ransom in exchange for the passengers' lives. Bomb expert Fallon (Richard Harris) is flown to the ship and, as negotiations break down, he struggles with the most challenging job of his life in a race against time!

Is it possible for a film to have too much talent? Take for instance, 'Juggernaut,' the 1974 high seas thriller starring Richard Harris, Omar Sharif, Anthony Hopkins, Shirley Knight, and Ian Holm. Sure, some of these actors were bound for much bigger roles in the decades to come, but, in a strictly retrospective sense, the film deserves some recognition for the sheer amount of star power backing up what amounts to highly enjoyable but somewhat slight entertainment.

Directed by Richard Lester ('Superman II'), 'Juggernaut' is 'Speed 2: Cruise Control' 23 years before that boat-filled terror capsized faster than a canoe in a hurricane. Unlike 'Speed 2,' however, 'Juggernaut' – though somewhat trivial in the grand scheme of its casts' otherwise distinguished catalogue – still manages to be an appealing film that utilizes its setting and premise as well as it does the talent who put in a lot of effort making the legitimate and compelling nature of the film seem easy.

Harris stars as a bomb expert named Fallon, who is called aboard the HMS Britannic when a terrorist calling himself Juggernaut demands a ransom for the many lives aboard the ship. Fallon exudes the best kind of roguish qualities that only an actor of Harris' immense skill and presence can imbue a character with. He's cocky but never reckless, charming but not flippant. Basically, Fallon is the kind of archetype one would expect to see in such a high stakes, plot-driven feature; he just happens to be played by one of the greatest actors who ever lived. 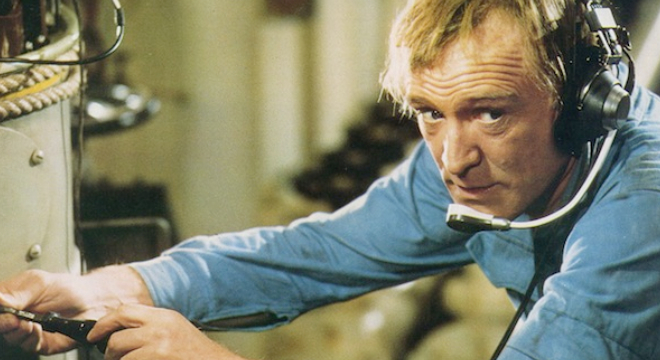 Backing Fallon up at sea is Omar Sharif as Captain Alex Brunel, a stoic man of the sea who remains outwardly calm in response to the threat, while silently bearing the weight of the many lives aboard his vessel. On land, Anthony Hopkins joins the search for Juggernaut as Supt. John McLeod – who also had the misfortune of putting his wife and child aboard the HMS Britannic that morning. Joining him is Ian Holm, as a government official eager to keep the incident from becoming a maritime tragedy.

Like other vehicular disaster films, such as the 'Speed' films or those in the 'Airport' franchise, 'Juggernaut' uses the innocent lives at stake as a story-building device to not only pad the action a little and raise the tension somewhat, but also put a face to the lives at stake, so as to make the gamble of Fallon's bomb disposal abilities all the more heroic or tragic. Many of the passengers take on an unsurprising range of characteristics. There's the annoying child who puts everyone in danger because he cannot listen to the simplest instructions; the rich, know-it-all American businessman who can't help but be offensive every time he opens his mouth; and then there is the lovely Shirley Knight as Barbara Bannister, who seems to have a burgeoning romantic relationship with the captain. Best of all, however, is Roy Kinnear's delightfully upbeat Social Director Curtain, who manages to he hilarious in whatever situation he's found.

That's an astonishing amount of characters for any one screenplay or director to juggle, and yet Lester and his writers, Richard Allen Simmons (credited as Richard DeKoker) and Alan Plater manage to juggle them just fine. In fact, the deliberate, almost clinical pacing of the film helps to legitimize the various threads running through the main narrative, by not focusing too much or too little on any one angle at a time.

Lester's vision for the film is itself a little like defusing a bomb: Despite the clock ticking down, and all the various wires and traps being set up, what the situation calls for are steady hands and plenty of patience. As such, 'Juggernaut' takes on a kind of anti-thriller tone (at least in comparison to today's similarly plotted thrillers), as it puts a premium on atmosphere and anxiety, and pays less attention to gigantic set pieces or unnecessary twists to keep the audience guessing.

That's not to say the film is without suspense or even action. There're plenty of white-knuckle bomb disposal sequences that have a few surprises of their own, and the action really begins during a harrowing attempt by the military to drop Fallon and his team into the incredibly stormy waters around the HMS Britannic. These moments may seem simple or otherwise ordinary in their straightforwardness, but really they become all the more suspenseful and thrilling by the way the film allows them breathing room to become exhilarating, rather than force the situation upon the audience.

In that sense, 'Juggernaut' is precisely like its namesake: something large and powerful that cannot be stopped. This is the kind of film that wins you over by sheer force of its story and the presence of its cast. Were it not for the likes of Harris, Sharif, Hopkins, and Knight, 'Juggernaut' may have ended up being a very rote action thriller. But by giving this straightforward, but exciting film over to a cast of wildly talented individuals, the end result is a fun, exciting adventure with strong actors playing at archetypes. And that, in this case, makes all the difference in the world. 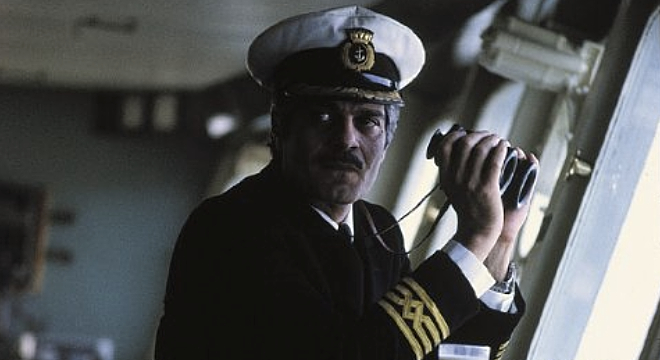 'Juggernaut' comes from Kino Lorber as a single 25GB disc in the standard keepcase. There are no special features included on the disc, which is a shame, but the film is worthwhile enough on its own.

The disc arrives with a 1080p ACV/MPEG-4 encoded transfer that looks very nice for its age. The image contains the normal amount of grain you would expect from a film released in 1974, but that graininess only contributes to the look and feel of the overall experience. Colors are quite bright, despite the drab, wet gray of the high seas and stormy weather of the setting. Reds, greens, and blues all stand out remarkably well without appearing oversaturated or otherwise too bright.

Contrast is high throughout, giving the film very good definition in darker moments, while making sure the brighter elements never run too hot or look blown out. There are a few instances where black levels could have been a little more robust, but since there is no evidence of banding or crush anywhere on the disc, things could have been worse.

The presence of grain does seem to inhibit the amount of fine detail that is available, but only slightly. Facial features, clothing and background textures all look very sharp and manage to have tiny details present in wide as well as close-up shots. Again, as with the contrast, the fine detail is good, but there are elements that could have been improved.

Overall, though, this is a very nice looking disc that will please fans of the film as well as those who've never seen it before.

'Juggernaut' has been given a strong DTS-HD Master Audio 2.0 mix that delivers plenty of sound effects and music, while paying particular attention to the film's dialogue. Again, as with the image, the requirements of a film in 1974 were different than today, but the mix here still gives a layered sound that, while not being wholly immersive, is very satisfying.

The mix is well balanced throughout, giving plenty of space to the various elements at play in any given scene. That means dialogue is rich and robust, even when the HMS Britannic is besieged by great waves or panicked passengers looking for safe haven from the mad bomber's bombs. That also means that atmospheric effects are present as well, giving certain moments like the thrilling dash to board the ship in extremely choppy seas sounds terrific. Other elements aren't as nuanced, and as such, some loud moments like an impromptu party amongst the guests can sound a little tinny at times.

Still, the sound delivers a big impact during the moments that it need to the most, making this a strong sounding disc.

'Juggernaut' may look like your standard action thriller, but its superb cast and measured directing by Richard Lester help it stand above the rest of the crowd. It may be slight in the story department, but the performances and the sheer number of recognizable faces make it a rare gem that is definitely worth checking out. With great picture and impressive sound, 'Juggernaut' manages to be recommended, despite not having any special features.

Sale Price 93.95
Buy Now
3rd Party 93.95
In Stock.
See what people are saying about this story or others
See Comments in Forum
Previous Next
Pre-Orders
Tomorrow's latest releases