To maintain his powers, the evil wizard Traigon must sacrifice his firstborn child to the god Caligara. His wife, however, has other ideas and runs away after giving birth with her twin daughters. Before dying, she hands the girls over to the warrior Krona who promises to raise them as great soldiers. Twenty years later, Traigon returns and begins hunting down his daughters once again. Will the twins, with the help of the Barbarian Erlik and the Viking Baldar, be able to defeat their father?

Ya gotta love a movie that immediately jumps into scenes and comments saturated in sexist language, almost comical chauvinism, and blatant acts of misogyny. Without explanation of the time or setting, audiences of 1982's low-budget fantasy actioner 'Sorceress' are straightaway thrown into a family dispute over parental rights. Dear ole dad Traigon (Roberto Ballesteros), a powerful evil wizard, wants to sacrifice his firstborn to some god named Caligara, Calamari, or some such silly name, because when this god's face is finally revealed, she looks half squid anyway. And the random-syllabled names pulled out of some imaginary universal grab-bag of fantasy monikers grows progressively worse and unintentionally funny. But anyhow, the understandably protective mom is none too fond of dad's approach to child rearing, so she's eviscerated with a three-bladed knife in the shape of an eagle's claw for disagreeing. Apparently, this is a time when divorced is most definitely not an option for ending a marital dispute.

In the middle of this little family tussle, another wizard Krona (Martin LaSalle), who actually plays the part as old geezer with a long white beard and the clothes to match his obvious state of poverty, shows up to settle things by supposedly killing dad, letting mom die and then handing the twins to a farmer, his wife and their newborn. Oh, yeah! Probably should mention the movie treats the discovery of twins as a surprising, clever twist to the plot. That's right, folks! There is not one but two babies born only minutes apart! But which came first for the sacrificial ceremony to satisfy a god's thirst for human blood? Holy Chekhov's gun, Batman, what a dramatic dilemma! Adding to this little pickle, the grizzled, gray-haired busybody comments disappointingly on the fact that the twins are "girl children" like it's some sort of hindrance or a cosmic joke only to burden him. And funny enough, this weirdly sexiest viewpoint turns out to be the story's major plot device, aside from the ritualistic killing of children. 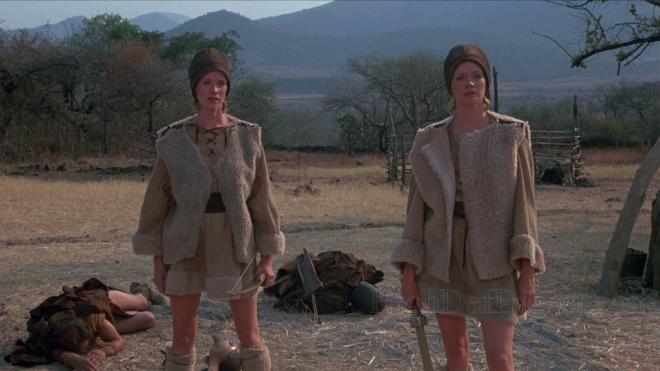 For the rest of the film, this becomes something in which nearly every character is allowed to comment on because in this sword-and-sorcery fantasy world, women are not expected to be special, have the ability to fight men and exist only to be objects of lust. Their worth is purely dependent on the male gaze. But, wait! The hilarious twist to all this is that the sisters will prove everybody wrong when they avenge their family's death by defeating Traigon — that they should be respected as equals to men and as human beings in their own right. Of course, it doesn't hurt that Krona imbues the girls with his powers of intelligence and his skills for martial arts fighting. It also doesn't hurt that Mira and Mara are played by former Playboy models Leigh and Lynette Harris, who have no qualms reminding male characters, and the audience in general, to respect them while exposing their breast on several occasions. Oh, apparently nobody knows they are female until they actually remove their garments. In the back of my mind, I hear the voice of Borat with big thumbs up, "Nice!"

Continuing along those same lines, the curvaceous ladies were, according to them, raised to never think of themselves as female, pointing out that they literally do not know the physical difference between themselves and other men. This head-scratching revelation is brought up in conversation with their male companions, a bargain-basement's Han Solo rebel prince Erlick (Bob Nelson), Gimli's long-lost warrior kin named Valdar (Bruno Rey) and a faun that only speaks sheep unimaginatively called Pando (David Millbern). From a script by well-known B-movie filmmaker Jim Wynorski, 'Sorceress' amazingly comes with good intentions, despite the fact the story being ridiculously bad and the end product undermining its absurd attempt at a positive portrayal of women. It makes for lots of unintentional comedy and is hilariously corny. However, the awesome exploitation-cinema legend Jack Hill ('Spider Baby,' 'Coffy,' 'Foxy Brown') does a brilliant job with the material and a limited budget from Roger Corman, which sadly goes down as Hill's final movie.

Scorpion Releasing brings Jack Hill's 'Sorceress' to Blu-ray on a Region Free, BD25 disc inside the standard blue case. At startup, viewers are taken a static menu with music and supplements on the main screen.

The buxom sorceress enchants Blu-ray with an ample and rather voluptuous 1080p/AVC MPEG-4 encode that breaks loose the stereotypes and expectations of a bygone age.

Aside from a few scratches, the occasional vertical line and a couple funny smudges from the lens, the source appears to be in excellent condition, providing some amazing definition and resolution for a 32-year-old low-budget picture. Fine lines in the clothing, foliage and stage design are sharply detailed while spot-on contrast allows great visibility in the distance. Primaries are brightly saturated, and earthy secondary hues provide a great deal of warmth with revealing, healthy facial complexions throughout. Blacks are true and accurately rendered with strong shadow details, giving the 1.78:1 image a welcomed and attractive cinematic quality cult fans will love.

Considering its history and origins, the DTS-HD MA mono soundtrack is actually somewhat impressive and a great complement to the picture quality. It may not rank higher or equal to the video, which is more due to production limitations than a fault in the codec, the audio still provides plenty of amusement and excitement to enjoy.

Imaging is fairly broad and welcoming with plenty of warmth and clarity that's consistent from beginning to end. Background activity is distinct and detailed thanks to a strong mid-range that exhibits fine separation in the higher frequencies. Surprisingly, low bass provides palpable weight and good response to the many action sequences. Sadly, the overall presentation still feels somewhat hollow, limited and narrow with a musical score that comes in a few decibels lower than the rest of the track. Although the ADR work often seems comical and not lip-synced perfectly, dialogue remains clear and intelligible without a hint of noise or distortion, making this a good lossless mix despite a few minor production issues.

From a script by well-known B-movie filmmaker Jim Wynorski and exploitation-cinema legend Jack Hill, 'Sorceress' is a well-intentioned sword-and-sorcery fantasy flick. But the end result is ridiculously and hilariously undermined by its absurd attempt at a positive portrayal of women. The Blu-ray arrives with a shockingly good picture quality and an equally satisfying audio presentation. Supplements are light but amusing nonetheless, making it a strong package for cult enthusiasts.

Sale Price 60.35
Buy Now
3rd Party 57.37
In Stock.
See what people are saying about this story or others
See Comments in Forum
Previous Next
Pre-Orders
Tomorrow's latest releases