Three university parapsychologists lose a research grant when their experiment methodology is proven to be bogus. The team decides to go into business for themselves as "Ghostbusters", a ghost removal service. After struggling to get on their feet, they are ummoned to investigate the strange happenings in a woman's Central Park West apartment. What they discover is that all Manhattan is being besieged by ghosts and other worldly demons through a portal in her building.

After sitting through a pile of some truly dreadful movies of late, it was a real pleasure to sit down and enjoy Ivan Reitman's vastly superior classic, 'Ghostbusters.' From the Columbia Pictures logo, accompanied by Elmer Bernstein's eerie score, to the moment the iconic theme song is cued, a smile full of fond memories plastered itself to my face, and the setup for the librarian ghost secured it for the remainder of the show. While there may not be anything spectacular about watching a couple of books moving from one shelf to the next or a really bright flashlight shine on an elderly woman's face, for me, it was all about the patient movement and pace in the expert direction before the main title rolls on screen. It's an effective opening sequence that generates interest with a farcical, light-hearted air of spookiness and mystery. Everything that follows is a grandiose spectacle of comedy and special effects, enhanced by an outstanding cast that makes the film feel as fresh and original as it did when it originally premiered. 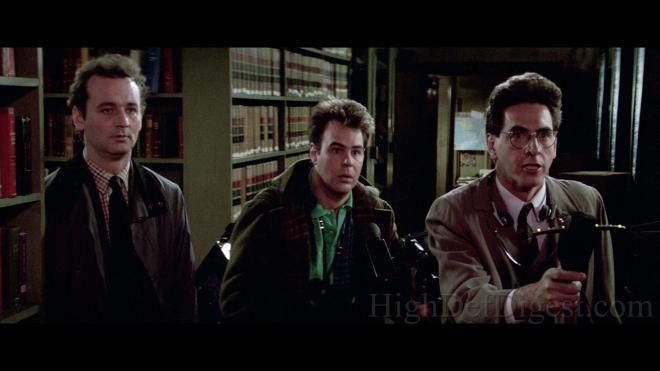 Capitalizing on a popular and universal interest in sci-fi, extraterrestrials and the paranormal, 'Ghostbusters' remains a timeless classic, full of memorable, understated lines ("You know, you don't act like a scientist"; "They're usually pretty stiff"; "You're more like a game show host") and many well-known scenes. This cinematic gem is one that shouldn't be missed . . . by the living or the dead.

Sony Pictures Home Entertainment brings 'Ghostbusters' to Blu-ray under the distributor's new "Mastered in 4K" line of products, supposedly optimized for UHDTVs but not actually presented in a native resolution of 2160p. The Region Free, BD50 disc arrives inside a blue, eco-lite keepcase with a code for an UltraViolet Digital Copy. At startup, viewers are taken straight to a static menu screen with music playing in the background.

For this 30th edition of the sci-fi comedy classic, producers recycle the same excellent 1080p/AVC MPEG-4 encode from last year's "Mastered in 4K" release. With that said, my impressions remain the same, showing a significant improvement with better clarity, resolution and much sharper image overall compared to other home video counterparts.

Presented in a 2.40:1 aspect ratio, the picture quality comes with a very noticeable layer of grain throughout, and some sequences, particularly low-lit interiors and nighttime scenes, are predominantly thicker than others, which only serve to give the transfer an appreciably cinematic appeal. More importantly, contrast and brightness levels are nicely balanced with crisp, bright whites and deep, rich blacks. There's still a tad of crush, here and there, but nothing too severe.

Facial complexions appear somewhat waxy, but flesh tones overall are warm with some very good textural details during close-ups. The color palette also receives a pleasant upgrade, displaying nice saturation in the primaries and accurate secondary hues. Architectural details are a nice treat to look at, especially at a distance, with the weatherization of the exterior of buildings and many of their intricacies clearly visible. There are a few scenes throughout that appear soft, but this is obviously inherent to the photography and the film's age rather than a weakness in the video. The image also possesses an appreciable depth of field that adds to the '80s film-like quality, making this a very welcomed high-def presentation of a classic and dearly-beloved film.

Interestingly, the Ghostbusters are called into action thanks to an excellent DTS-HD MA codec. Of course, there's really no significant difference between this and its Dolby TrueHD counterpart from last year, so for all intents and purposes, they're identical. Originally an 80s stereo mix, the audio is nicely maintained and balanced across all three front channels, feeling expansive and naturally spacious. The entire soundstage contains various special effects and ambient sounds with a wide dynamic range, offering decent room penetration and clarity throughout, and vocals are crystal-clear and precise in the center. The original musical score by Elmer Bernstein and the iconic theme song by Ray Parker, Jr. enjoy a broad and sometimes engaging soundscape, with minor bleeds in the background.

As expected, surround activity is limited, with only a few atmospheric cues, like the sound of crickets or New York street traffic heard in the distance. Directional pans exhibit smooth movement between the channels for a few pleasing moments of envelopment. Expanding the sound field a bit, the lossless track becomes lively toward the third act once ghosts escape from the containment grid. The battle with Gozer fills the room with plenty of activity in the rear speakers. Low-frequency effects are quite weighty for a 25-year-old sound mix, adding palpable depth to each time the "proton packs" are activated and used. All things considered, this is a highly-enjoyable and well-balanced presentation.

'Ghostbusters' remains just as amusing and hilarious as when it first hit theaters, full of gut-busting dialogue and many memorable scenes. Demonstrating that big-budget special effects can mesh well with laugh-out-loud comedy, the film remains one of the most successful comedies ever made, and continues to convert a new generation of fans with each viewing. This new "Mastered in 4K" Blu-ray edition of the Ivan Reitman classic arrives with improved picture quality and excellent lossless audio. The overall package should make the most devoted and loyal fans happy with their purchase.

Sale Price 9.99
List Price 19.99
Buy Now
3rd Party 6.73
In Stock.
See what people are saying about this story or others
See Comments in Forum
Previous Next
Pre-Orders
Tomorrow's latest releases