The life of construction foreman Ivan Locke unravels during a 90-minutes race against time as he drives from Birmingham to London.

Sometimes the simplest concept can deliver the most rewarding viewing experience, as the inherent simplicity of the film's conceit gives way to a surprisingly captivating encounter that flies in face of the "bigger is better" ethos most films today cling to like a barnacle on the hull of an unnecessarily oversized vessel.

The term "surprisingly captivating" comes to mind while watching 'Locke' because, with the exception of the short opening sequence, the film takes place entirely in a single moving vehicle. That vehicle, though spacious and no doubt luxurious, is occupied by a solitary man, Ivan Locke (Tom Hardy), as he makes a lonesome journey on the M5 motorway en route to London, while handling a series of phone calls forcing him to accept that life as he knows it will, from this moment on, be irrevocably changed. In essence, Ivan Locke is stuck in a car on the night his entire life slowly begins to slip away.

Despite the confining nature of its narrative, the film deals almost exclusively in matters of tremendous magnitude. The fact that they are happening to just one man, as the inevitable outcome of a single decision he has made, makes them far more resonant than if the tension had been derived from an intimation of a choice yet to come. As such, 'Locke' actually begins with the choice that will alter the course of Ivan Locke's life forever, and yet, writer-director Steven Knight – whose previous efforts include writing gritty crime dramas like 'Dirty Pretty Things,' 'Eastern Promises,' and making his directorial debut with the surprisingly stern Jason Statham effort 'Redemption' – delicately draws the audience's attention to that choice, without first revealing the enormity of it, by briefly focusing on a turn signal suggesting one direction, before it is hastily changed to indicate the exact opposite. 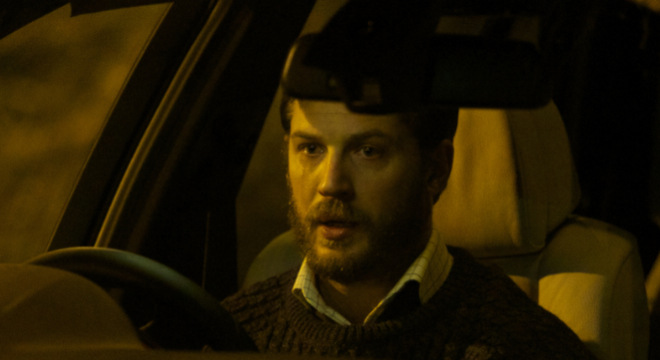 That single choice is what fuels the film for the next 84 minutes, which means 'Locke' is primarily concerned with the idea of consequences and how one decision builds into something meaningful, taking the protagonist from one stasis point to the next, all the while revealing not only his actions but also the world those actions have forced him to leave behind. Those consequences begin to emerge soon after Locke is on the motorway, as Knight establishes the character's backstory, briefly touching the construction project he's left behind because he's on his way to be with the woman who is in labor with his child. Complications naturally arise from this pending rendezvous when it is revealed the woman is not his wife – who instead is at home with their adolescent child.

Hardy takes a measured approach to the depiction of his character that reveals as much about Ivan Locke as his circumstances do. He delivers a stunning performance that demonstrates how much emotion and sentiment can be conveyed with simple line readings of a man trying desperately to remain calm and to keep everything (including himself) from falling apart. The lack of over expressiveness in both his dialogue and face suggest many more important aspects about the character than would otherwise have been delivered through an exhaustive backstory.

Ivan handles the seemingly endless barrage of phone calls with the same kind of cool pragmatism, demonstrating his belief that his or any man's worth comes from owning up to his mistakes and remaining committed to correcting them. There is an inherent hypocrisy in Ivan's actions that make him an interesting contradiction. But he is a man of principle, someone who strives to remain committed to his own beliefs, and when he knows he's acted in violation of them, he is even more steadfast in seeing them carried out to the letter. Thankfully, before Ivan's personal code of conduct can be scrutinized too rigorously, Knight affords his character an out, when it comes to the proverbial fiber of his fabric.

When he's not busy fielding phone calls from an angry boss, a semi-inebriated employee, his wife, his son, or the woman busy having his child, Ivan finds himself staring in the rearview, berating a father who is not there – nor was he ever. As such, despite the clumsiness of the one-man interplay, it becomes clear that, in the hierarchy of Ivan's personal beliefs, not being the same man as his father, and, more importantly, not letting a child grow up knowing he's the same bastard his father was -- trumps all else.

It is here that the notion of foundation becomes the resonant theme, linking Ivan's past with the construction project he continues to work on from the road, and the child he has inadvertently helped bring into the world. And from this Knight, as well has Hardy, demonstrate how devoted they are to the foundation of a film that is organized around one simple idea but then expands to reveal several more concepts, all while remaining true to the unique setting that is at its core.

In the end, 'Locke' becomes a terrific example of how a simple concept can be carried through to the end and wind up landing as close to the best possible version of that concept as anyone could have imagined. The film is not without its faults, but credit Knight and the mesmerizing and measured performance from Hardy for working so hard to keep the concept simple, while also delivering an emotionally intense, and surprisingly captivating film. 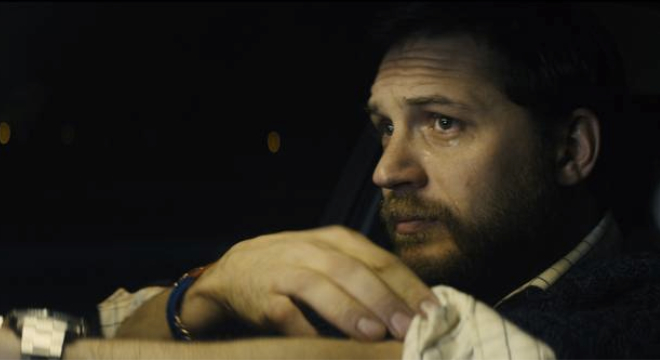 'Locke' comes from Lionsgate as a single 25GB Blu-ray + Ultraviolet Digital Download in a standard eco-keepcase. There are several previews before the disc gets to the top menu, but they can all be skipped.

With its 1080p AVC/MPEG-4 encoded transfer, 'Locke' makes the most of its limited visual tricks by making what little can actually be seen look very good. Naturally, all that we see of Hardy throughout the film's slight run time are the portions visible behind the wheel, and that limited view is further stunted by the fact that the entire film takes place over the course of one night. So, essentially, 'Locke' is stacking darkness on top of a claustrophobic setting and somehow it comes away with a sharp, stylish picture.

Perhaps knowing that the film would undoubtedly become stale without a few flourishes, Knight applies some interesting effects to several scenes, transposing images of the motorway atop Hardy's face, or making the yellow lights illuminating most of the film more incandescent than they might be otherwise. The effect, then, is quite good. Fine detail is present, but it may be limited due to some of the tinkering that was done to the image. Still, it is readily apparent in close ups and reveals some nice details in facial features as well as textures.

Color is also limited, but a few shots of a neon green safety vest and the center console of Locke's BMW provide some vivid colors. Mostly, though, the image relies heavily on contrast, which is fairly high throughout. Blacks are most definitely strong and full-bodied, and thankfully free of banding or crush. The filtering of the image does make certain scenes appear hazy, but the shadows and darkness are not to blame for some soft edges here and there.

Overall, this transfer looks quite good and shows how a stylish and filtered image can still look great even in such limiting circumstances.

The DTS-HD Master Audio 5.1 mix is also something of an odd duck. The film is almost entirely dialogue, with a few sound effects here and there and Dickon Hinchliffe's subtle score. First and foremost, the dialogue is clean and distinct throughout the film. Even the actors on the other end of the phone sound clear, despite there being obvious signs of distance between them – which is a nice touch. Surprisingly, the mix also does a great job in delivering a subtle, but constant atmospheric immersion that includes the sound of the road, as well as small movements by Hardy in his front seat. While that may not sound terribly exciting, it actually brings a great deal of realism to the film.

Otherwise, the mix makes the best of a rather stark aural landscape by making sure what little elements it does have are as clear and precise as they can possibly be. There are a few instances where the sound of passing cars might have been punched up a little on the rear channels, but overall, for such a quiet film, this mix sounds remarkably full of life.

Audio Commentary with Director Steven Knight – Knight gives an insightful commentary that takes the viewer through the unique process of making a single location film, in a location that happens to be constantly moving. He also goes into the process of having actors working remotely and how that played into Hardy's performance. This is the kind of film begging for a commentary, and it's nice to see one included here.

Ordinary Unraveling: Making 'Locke' Featurette (HD, 10 min.) – This is a surprisingly deep featurette that brings nearly everyone involved to the table, and shows how the actors comprising the voices of the other characters managed to work with Hardy while he was in a car miles away. Very interesting.

'Locke' explores such a wide array of emotions and ideas that its unique setting and single on-screen character presentation become far more than a mere gimmick. The film is incredibly well made and thought-provoking, and Hardy's performance is at the same level as in 'Bronson.' With very good image and sound, and a much-needed commentary, 'Locke' comes highly recommended.

Sale Price 14.67
List Price 19.99
Buy Now
3rd Party 12.41
In Stock.
See what people are saying about this story or others
See Comments in Forum
Previous Next
Pre-Orders
Tomorrow's latest releases