Cameron Diaz leads a knockout cast in this irreverent comedy about love, lust and the laws of karma. New York attorney Carly Whitten (Diaz) is nobody's fool. So when she accidentally discovers that her too-good-to-be-true boyfriend Mark (Nikolaj Coster-Waldau) is married, she's less than thrilled. Not only that, she and Mark's wife Kate (Leslie Mann), learn about yet another mistress (Kate Upton)! Before long, however, the betrayed beauties have become unlikely pals who've decided to teach their three-timing man a lesson. The more the trio learns about Mark, the worse he seems, and the more fun they have without him!

By the end of 'The Other Woman,' I felt torn. On the one hand, there are moments that are near inspiring and tender with genuine bits of comedy which bring the two female leads closer as friends. On the other hand, the lighthearted movie is also littered with dispiriting scenes of gross-out gags that add nothing to the story and are frankly desperate, foolhardy attempts to shock audiences into laughter. Clearly, it wants to follow in the vein of 'Bridesmaids' and 'The Heat' — or rather, cash-in on the current trend of raunchy female comedies — but is only able to reach the levels of 'Bride Wars' and 'All About Steve.' On the surface, the filmmakers were going for a pro-sisterhood theme, but end on a pseudo-feminist note that doesn't do justice for any of the established female personalities.

One major, immediate problem is that in a fairly straightforward plot about three women joining forces to get back at the same man who cheated on them with each other takes a long time to finally get going. Opening credits commence with a rapidly blooming and highly romanticized love affair between Mark (Nikolaj Coster-Waldau of 'Game of Thrones' fame) and Carly (Cameron Diaz), one which makes him out to be her perfect soul mate. However, already knowing he's a lying, two-timing jerk from the previews, the sequence is we're down eight obviously intended to establish Diaz as the star. And such, she plays the film's strongest character, a successful and strong-minded lawyer — the only one genuinely hurt and wanting to move on with her life after discovering Mark's true marital status.

When we finally meet Kate (Leslie Mann), the wife, the script from Melissa Stack -- making her feature-length debut -- works overtime at making the unfaithful husband into a loving, devoted and deeply committed spouse. It's a somewhat discomforting experience because we're expected to hate the disloyal man, especially since he's apparently very good at hiding his deceitful ways, but the character comes quite close at being likeable. More problematic is the usually funny and talented Mann wasted as a Suzy Homemaker stereotype that's near infuriating at times because she's also so irksomely gullible and insultingly dense. When Mark asks her to mysteriously sign some legal documents, it's clear his lies go deeper into some illegal activities, a subplot that later works in the favor of the three vengeful women finding the perfect way to even the score. 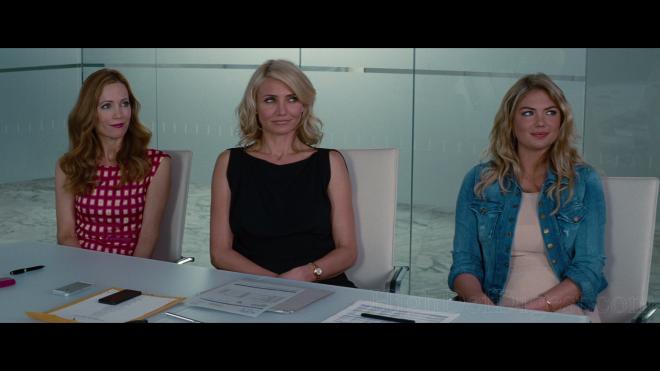 Admittedly, how Carly and Kate discover one another is well executed and amusing, and even their friendship, despite also being a bit awkward, comes with a few comical moments. But the narrative noticeably moves in stages, feeling very episodic — a formulaic four-act story where the first quarter introduces the deceit and the second quarter is devoted to the deceived becoming friends. The third quarter suddenly transforms the film into a situational comedy where the two unlikely BFFs learn of a second mistress, Amber (a very wooden Kate Upton), that's half the age of both women and jokingly portrayed as ten times hotter. And weirdly for a movie with feminist aspirations, the buxom blonde is a worse, grating stereotype. She's the ditzy bombshell and is immediately objectified by both the camera and our two leads, both of whom jump into a jealous rage of appraisals.

If overlooking the several negative aspects, 'The Other Woman' has the potential for being a genuinely heartwarming comedy, and it wouldn't be surprising that some viewers might actually be genuinely entertained by it. However, seen from afar, the women are mostly portrayed as racy vindictive vixens whose lives center on one man incapable of honesty and commitment. And in the case of Diaz's Carly, for every one successful, liberated female, there are two -- maybe three with Lydia (Nicki Minaj) -- boy-crazy, needy and emotionally dependent women. Nick Cassavetes, son of legendary independent filmmaker John Cassavetes, directs with a journeyman-like style that sadly fails to make much of the comedy appealing. By the end, we walk away neither hugely disappointed or overly entertained, but time is better enjoyed on some other movie.

20th Century Fox Home Entertainment brings 'The Other Woman' to Blu-ray on a Region locked, BD50 disc. Housed inside a blue eco-cutout case with a glossy slipcover and a flyer for a Digital HD copy, the disc commences with several skippable trailers. Afterwards, viewers are taken to a screen with full-motion clips, music and generic menu options.

'The Other Woman' bears it all on Blu-ray with a stunning, near-reference 1080p/AVC MPEG-4 encode that flaunts its good looks without a second thought. Facial complexions are healthy and show lifelike textures, especially in close-ups, exposing every wrinkle, pore and minor blemish in the cast. Individual hairs, particularly in scenes with Cameron Diaz, are distinct, subtle patterns in Nikolaj Coster-Waldau's suits are very well-defined, and every thread in Leslie Mann's loud, gaudy outfits is plainly visible. Helicopter shots overlooking New York City are, of course, spectacular with resolute, razor-sharp fine lines running in every direction along buildings and the busy concrete streets.

Presented in a 2.40:1 aspect ratio, the freshly-minted transfer boasts a brilliant, comfortably-bright contrast, allowing for some extraordinary shots of New York, the suburbs and the Bahamas. Primaries are richly-saturated and vivid, giving the movie plenty of life and charisma, while cleanly-rendered secondary hues energize with a cheerful, affable appeal. Blacks tend to waver somewhat in several scenes, looking a tad dull and murky during many brightly-lit interiors, but for the most part, levels are accurate with excellent detailing within the darkest shadows. Overall, the high-def presentation is outstanding for a disappointingly average movie.

They are three angry women; hear them roar! But sadly, they don't make much of an impression with a DTS-HD Master Audio soundtrack that comes with much to admire but still fails to leave an impact. There's nothing bad per se, it's just rather average and unexciting. Of course, this isn't the type of movie to demo one's system, where much of the attention is on the characters, dialogue and humor. But at least, a little bit of activity in the rears or even in the fronts would have been appreciable.

For the majority of the film's runtime, the design feels narrow and restrained to the front soundstage. Although mid-range is clean and detailed, it's not particularly dynamic or extensive. The music and song selections are the only things which generate a wider, more expansive feel, nicely broadening and extending the soundfield. Conversations are well-prioritized and audible at all times, but again, it seems as though the rest of the world suddenly quiets down in order to hear actors talk. And this is most apparent during outside scenes in the busy New York streets. Bass is responsive and pretty heavy, providing some great thumping weight, and still, the overall lossless mix doesn't offer anything memorable.

An attempt to capitalize on the current trend of raunchy female comedy, 'The Other Woman' is an unfunny, episodic movie that relies on crude and mean gags to shock audiences into laughter. The potential for something more meaningful is there, but sadly Nick Cassavetes fails to bring it to fruition. The Blu-ray arrives with stunning picture and a good audio presentation, but supplements are terribly light and even less amusing than the film. The overall package will please only those that liked it in theaters, but for the curious, this is a rental at best.

Sale Price 5.98
List Price 14.92
Buy Now
3rd Party 29.99
In Stock.
See what people are saying about this story or others
See Comments in Forum
Previous Next
Pre-Orders
Tomorrow's latest releases