Starry-eyed teenager Camilla Swanson wants to follow in her mother's footsteps and become a Broadway diva, but she's stuck working in the kitchen of a snobby performing arts camp. Determined to change her destiny, she sneaks in to audition for the summer showcase and lands a lead role in the play, but just as rehearsals begin, blood starts to spill, and Camilla soon finds herself terrified by the horror of musical theatre.

Minnie Driver stars in Jerome Sable's 'Stage Fright' as . . . a picture on the back door of an industrial size refrigerator? Yeah, that seems about right. The London-born actress of 'Sleepers,' 'Grosse Pointe Blank' and 'Good Will Hunting' only makes a physical appearance in this surprisingly entertaining horror hybrid for the first five minutes of the movie's brisk 89-minute runtime. For the remainder of a story set in a musical-theater summer camp, she is a signed photo inside a fridge her teenage daughter stares at with doe-eyed admiration. And even then, we only ever see her in the whole production for maybe a quarter of the total time, yet promotional material advertise the talented Driver as the major attraction.

But thankfully, this negligible infraction is not a downside. Rather, it's part of the film's charm and appeal because seeing a recognizable star mostly appear as a picture is a source of merriment, a small subtle piece to this lighthearted farce. Sable, who makes his feature-length debut and comes from a background of theatre and music, imbues the story he co-collaborated with Eli Batalion with his knowledge of other horror movies, proudly displaying his influences with humorous reverence. Driver is essentially our Janet Leigh but extends a bit on a deeper lever as a morally ambiguous character that brings about a ripple effect. In the movie, the ghost of her Broadway diva haunts the lives of the characters.

For the film as a whole, genre conventions haunt the narrative with bizarre but unexpectedly funny reverie, particularly the comedy and the musical with a heavy dose of gory horror. To be more precise, Sable borrows inspiration from the "slasher" and the youth camp in the woods, down to the virginal "Final Girl" in Allie MacDonald's Camilla, an aspiring singer and daughter of Driver's character. In fact, Sable uses Camilla's innocence for taunting both viewers and the young girl when the amateur director Artie (Brandon Uranowitz) takes advantage of his position to seduce starlets. The little jerk intentionally creates a competitive tension between Camilla and the equally talented Liz (Melanie Leishman) to fight for his affection in order to win the main role of the camp's musical play. 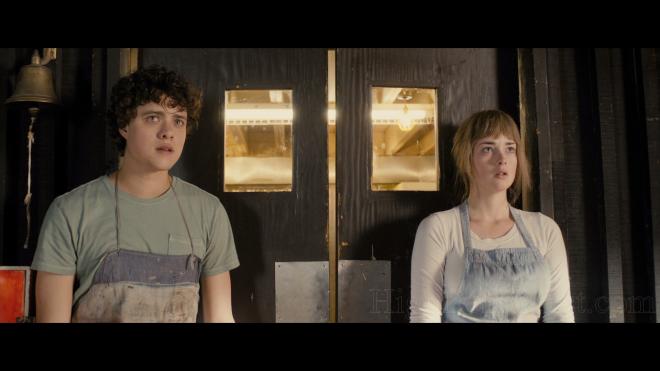 The play is a rather interesting kabuki interpretation of the fictional The Haunting of the Opera, which is of course an obvious reference to the real-life Andrew Lloyd Webber musical. Functioning like the plot's MacGuffin, the production opens doors to a variety of smaller subplots that are as impressively entertaining and focused as the main idea of a crazed masked killer attempting to stop the play before opening night. A mustached Meat Loaf also stars as the camp's director and former Broadway producer thinking this particular show is his ticket back to fame. There's also an underdog framework that has viewers cheering for Camilla, who also must contend with the stalker-like love Joel (Kent Nolan) and a very bitter fraternal twin brother Buddy (Douglas Smith).

In this familiar whodunit mystery structure, it's not difficult to figure out the person behind the admittedly cool killer mask — an eerily strange cross between kabuki and Eric Draven of Alex Proyas's 'The Crow.' Which for some could argue to the harm of 'Stage Fright.' Sable has audiences hilariously guessing between Joel, Meat Loaf and the camp's creepy caretaker (Greg Dunham), who is an uproarious rip-off the always guilty old man in any number of 'Scooby-Doo' episodes. However, the joy in Sable's directorial debut is not in the plot as much as it is in how terrifically blends the "slasher" with the modern musical. It's basically 'Friday the 13th,' 'The Burning' and 'Sleepaway Camp' meets 'Glee.' Only, this better, delightful horror gem scares the bejeesus out of those annoying brats.

Magnet and Magnolia Home Entertainment brings 'Stage Fright (2014)' to Blu-ray on a Region A locked, BD50 disc inside a blue, eco-cutout case. After a few skippable trailers, viewers are taken to a menu screen with full-motion clips and music playing in the background.

'Stage Fright' shines on Blu-ray with a great and overall satisfying 1080p/AVC MPEG-4 encode that'll have most fans cheering while other more discerning eyes will find the very few imperfections worth noting. Shot entirely with HD cameras, the video has that unattractive digital appearance with several negligible instances of banding. Although whites are clean and bright, overall contrast is a bit on the weak side, creating a slightly flat picture with some spots of blooming. Blacks waver noticeably, sometimes looking inky rich and accurate while at other times murky and dull.

On the plus side, the 2.35:1 image is razor sharp and highly-detailed, exposing every thread and stitch in the costumes. The fine lines in the wooden bunks and theater are distinct while facial complexions are revealing with lifelike textures. Primaries are well-saturated and cleanly rendered, and softer pastel hues add warmth and energy to the humorous musical numbers. The high-def transfer comes with pluses and minuses, but altogether, the movie debuts with a great presentation.

The real showstopper in this amateur production is a fantastic DTS-HD Master Audio soundtrack that excites and explodes with musical enthusiasm.

The front soundstage is expansive and welcoming with excellent fidelity and acoustical detail. Thanks to an incredibly extensive mid-range, the original music of Jerome Sable and Eli Batalion creates an engaging wall of sound with superb distinction in the orchestration. Channel separation and balance are outstanding with off-screen activity that's amusingly convincing. The low-end surprises by packing a palpable punch and providing appreciable weight to the music while also digging to the ultra-low depths in a couple places. (bass chart) Amid the excitement, dialogue is pristine and precise in the center from beginning to end.

Rear activity is also put to excellent use with a variety of subtle discrete effects that generate a pleasingly immersive soundfield. The room fills with local wildlife, the leaves on trees rustle in the distance and the chatter and applause of the audience is surrounds the listener. Of course, it's the song and dance numbers which leave a memorable impression as voices echo throughout with flawless panning and individual notes in the music spread all around. In the end, this is a fun and lively lossless mix.

A surprisingly entertaining hybrid of musical comedy and the "slasher" horror, Jerome Sable's 'Stage Fright' is a delightfully amusing and witty debut full of laughs and good musical numbers. The Blu-ray arrives with great-looking video and a slightly better audio presentation. With a strong assortment of supplements, the overall package is recommended for genre fans.

Sale Price 14.92
List Price 16.98
Buy Now
3rd Party 2.99
In Stock.
See what people are saying about this story or others
See Comments in Forum
Previous Next
Pre-Orders
Tomorrow's latest releases