Blue Ruin is a classic American revenge story that recently won the FIPRESCI International Critics Prize at the Cannes Film Festival where it screened in the Directors' Fortnight. The film follows a mysterious outsider whose quiet life is turned upside down when he returns to his childhood home to carry out an act of vengeance. Proving himself an amateur assassin, he winds up in a brutal fight to protect his estranged family.

There is a tradition in cinema (especially American cinema) where the act of revenge becomes the only way a character's world can be made right again. There is righteousness in the reciprocity of an offense. And through that particular lens, violence is seen as the restorative element used to initiate a phase of justified renewal. It is part of the structure of the subgenre that violence begets the situation, and, in turn, violence is the only vehicle through which a supposedly curative transition can be made. Too often, then, vengeance is equated (or perhaps confused) with the concept of justice – an eye for an eye and all that – making these homegrown death dealers the virtuous hero of a narrative that supposedly stops when the vengeance is appropriately meted out.

But the bloodshed almost certainly doesn't stop here. Violence doesn't work in both directions; it has no actual healing properties. Violence is by nature a destructive act, one that typically sees the scales of justice perpetually unbalanced, as the two sides are constantly seeking bloody reparation from one another. And so, as therapeutic and cinematically engaging as vengeance can often times seem, writer and director Jeremy Saulnier's incredibly engrossing 'Blue Ruin' takes an unflinching glimpse into the life of a solemn recluse, and puts a potent, fatalistic spin on the alluring notion of revenge.

Early on, there's no hint of where the story is planning to go, as it contentedly watches a bearded and bedraggled homeless man named Dwight (Macon Blair) bathe pensively in a vacation house he's broken into, before darting out the window upon hearing the tenants return home. The next few minutes are silent, not a word is spoken as the opening is devoted entirely to Dwight's routine, watching him collect recyclables from the beach, steal half-eaten food from a boardwalk dumpster, and bed down for the night in his rusted blue Pontiac Bonneville that's parked on the outskirts of the beach. Soon, though, Dwight's routine is upended, and he takes on the road, after learning the man responsible for the deaths of his parents has been released from prison. 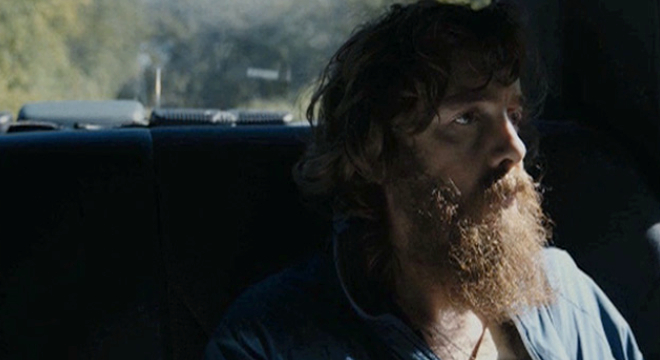 Like its protagonist, 'Blue Ruin' is taciturn at first, seemingly unpracticed at the art of conversation. It's not until Dwight (and the film itself) has warmed up a little bit, and the situation calls for discussion that the audience is let in on the details of what's really going on. By that time, however, things have already become bloody, and the family feud that started everything is once again renewed.

With that set up, Saulnier tracks the unending cycle of violence by delving into the universal fear of victimization by combining it with the very American attitude of every-man-for-himself. He then uses that as a springboard to illustrate the moral, emotional, and psychological toxicity at play in the need for some individuals to settle scores. As Saulnier sees it, and as Blair so convincingly portrays, fulfillment of that need doesn't lead to emancipation from grief or anger or despair; it simply brings more of the same to a larger group of people. And in making that point, the film astutely draws more and more characters into Dwight's quest for revenge, taking the vacuum of his former existence and turns it inside out so that it taints everything he comes into contact with.

To that end, Blair is tasked with playing Dwight almost like two different characters. His performance early on is almost completely silent and he conveys a tremendous amount of emotion through his eyes, and other simple facial expressions. As film progresses, though, Dwight is forced to interact with more and more people, and as a result, Blair becomes increasingly animated and convincing as a man tormented by some very dark demons. Some, people he encounters, like his sister Sam (Amy Hargreaves) and his old high school buddy Ben (Devin Ratray, 'Home Alone'), help paint a better picture of who he used to be, while the relatively unseen family who are trying to kill him dynamically illustrate the kind of person he is now.

What makes 'Blue Ruin' different from the countless other revenge-driven dramas out there lies in how the protagonist and the narrative are acutely aware the limitations of his actions, and how the cycle of violence will go unbroken until everyone involved is dead. As such, the movie's violence is used sparingly, but it is handled in such a way that it will leave an indelible mark on all those who watch it. Almost every action is as physically devastating as it is utterly gruesome to look at. This is the kind of film that makes its audience want to cringe, not cheer when a bullet tears through its target, or when a knife slides across someone's skin. Visually, it is effective and horrible without being gratuitous or overwrought. It is violence for a purpose, both in the narrative and the implication of the narrative.

'Blue Ruin' is a stark, uncompromising look at the essence of vengeance and the role it plays in an otherwise civilized society. It's no surprise, then, that the man carrying out said retribution begins his journey as an outsider, only find himself pushed physically and emotionally further into the margins of civilization, as his unbending quest for justice heads toward its inevitable conclusion. This is a rare revenge film that is as smart as it is brutal. 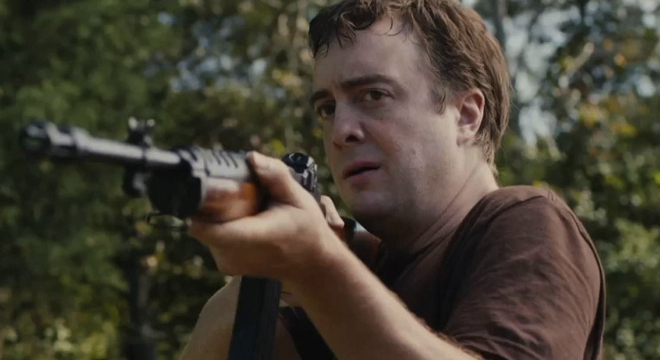 'Blue Ruin' is a single 25GB Blu-ray from Anchor Bay in the standard keepcase. There are a few previews ahead of the top menu, but they can be skipped. At the menu screen, you can choose your caption settings, check out the special features, or head straight into the film.

The 1080p AVC/MPEG-4 encoded transfer offers a crisp, clear, richly colored presentation of a film that was clearly shot on a limited budget. Shot digitally, the image is free from any kind of grain, which might normally be something of a detraction for a film that's as down and dirty as 'Blue Ruin' is, but Saulnier – who also served as the cinematographer – proves himself as adept at handling the camera as he is directing the action happening in front of it. The film is compositionally very strong and sometimes striking, which is further enhanced by the high levels of detail found throughout. Facial features and textures are very strong during close-ups, and while they are diminished somewhat during wider shots, the effect is nominal. Colors are slightly muted but still manage to be vibrant on occasion (unsurprisingly, blood pops quite well on the screen).

Contrast is high throughout. Black levels produce full-bodied shadows and inky nightscapes that remain sharp and don't dilute the detail. Whites are evenly balanced and never look overblown. There is no crush present whatsoever, and banding is nominal. Some soft focus issues aside, this is a very nice looking disc from start to finish.

'Blue Ruin' has been given a sharp, focused DTS-HD Master Audio 5.1 mix, offering up an immersive presentation that generates a strong sense of atmosphere to help compensate for the moments when the film is devoid of dialogue or action. Still, dialogue is very precise and it comes across as very easy to hear, even when regional accents and slight drawls come into play. The mix balances dialogue with atmospheric effects quite well, letting the actors' voices come through amidst everything from the sound of traffic, to a busy restaurant, to gunfire. Dialogue is mostly pushed through the center channel, while effects are spread out across the front and rear channels. Most light atmospheric elements linger on rear channels, but occasionally heavier sounds will emanate from those channels as well.

Music plays a key part in the film, as long stretches of highway roll by to the tunes coming out of a car radio. The various songs all sound very nice, exhibit a great dynamic range, and even offer some LFE for extra depth.

All in all, this is an impressive sounding mix that delivers on everything you might want from such a picture.

Feature Commentary with Writer/Director Jeremy Saulnier and Macon Blair – Saulnier and Blair are close friends, which makes for an entertaining and informative commentary that mixes behind-the-scenes anecdotes with insightful comments on the story and filmmaking techniques.

No Regrets: The Making of Blue Ruin (HD, 19 min.) – This is a great little documentary that tracks the seemingly stalled careers of Saulnier and Blair, as they try to put together the funding and time to make 'Blue Ruin,' and traces it all the way to its world premiere at the Cannes Film Festival.

Camera Test (HD, 4 min.) – This feature contains the footage Saulnier shot to convince investors and actors the film was the real deal, and what kind of tone and look the finished product would have.

'Blue Ruin' has as much to say about the cost of violence, as it does about its characters' reliance on it. Saulnier and Blair have made a dramatically different – but no less visceral – film from their previous effort in 'Murder Party,' but this film delivers a very compelling look at a talented filmmaker and actor who will hopefully be afforded more chances to work and bring forceful filmmaking like this to life. With good image, great sound, and some interesting features, 'Blue Ruin' comes highly recommended.

Sale Price 42.83
Buy Now
3rd Party 42.83
Usually ships within 9 to 10 days.
See what people are saying about this story or others
See Comments in Forum
Previous Next
Pre-Orders
Tomorrow's latest releases