After losing his beloved Kisha in a car accident, Malcolm starts anew, by remarrying Megan, a mother of two. When things begin to get back into their paranormal ways, targeting both the children and the property, things complicate even more when his back-to-life Kisha moves into the neighborhood.

Sequels, by default, are never as good as their predecessors, and sometimes they're worse. Except for a very rare few, this is a given if not nearly expected by the general movie-going audience. But even when knowing this and understanding the probability that the second will likely be inferior, what happens when the first movie is already so god-awful that a sequel's only rcourse is to sink to lower and be more dreadful levels. At the expense of my intelligence, and all human progress for that matter, such is the sad case of 'A Haunted House 2.' It's a movie so frighteningly atrocious and so horrifyingly terrible that it makes Adam Sandler's recent slew of utter crap seem like decent, watchable entertainment. And we're talking about preferring 'Jack and Jill' over this hot pile of nauseating manure.

Granted, the choice is like being asked to decide which would you rather have smashed by a baseball bat: your hands or your kneecaps. Or rather, in this case, which one sounds like more fun: being banged on the head with an iron skillet or having your eyes pepper sprayed. No matter the choice, you're walking away feeling betrayed, sick to your stomach, and nauseous from a grotesquely painful headache. This is especially true for this movie, which reunites hack scribers Marlon Wayans (bottom of the barrel of an otherwise talented funny family) and Rick Alvarez with nothing-of-note director Michael Tiddes. Which would you sacrifice when admitting to watch this ridiculously appalling mess: you're self-respect, showing your face in public or a gargantuan helping of brain cells?

I suppose this puts me in an interesting predicament since I'm openly admitting to sitting through 86 grueling minutes of unpleasantness and complete boredom. Basically, I chose the iron skillet — one hard hit for every minute I tolerated. My brain cells more likely committed suicide while I sat there with a fist trying to hold up my head. Picking up moments after the events of the first movie, the sequel is a series of physical pratfalls, stupid cultural references and offensive vulgarities parading as funny. By the way, the offense is towards comedy in general because it's a sad state of affairs when this is what tickles people's funny bones. Even worse when it actually returns a profit on a small budget, warranting future installments and feeding Marlon's ego. 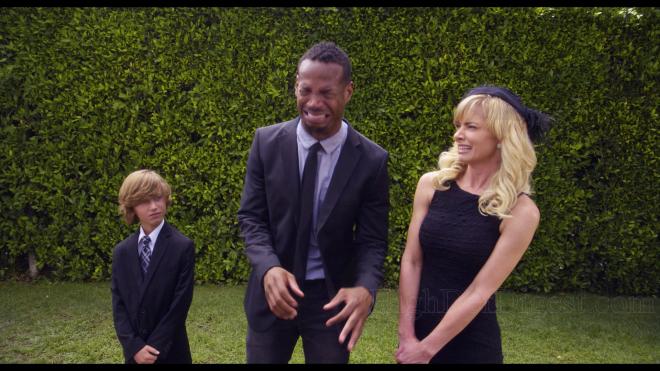 Speaking of which, for this horror spoof follow-up, Marlon has sadly sunk to a new low — one scene that pretty much encapsulates the overall lack of intelligence in the entire production. A year after literally dumping his possessed girlfriend Kisha (Essence Atkins), Marlon's Malcolm moves in with divorced Megan (Jaime Pressly) and her two kids — a racial and dysfunctional family gag that quickly loses steam but the filmmakers nonetheless beat to a pulp. While the family is away for a few hours, Malcolm suddenly grows intimate with a doll, explicitly showing a variety of disgusting positions and tricks. The scene runs for far too long and is more disturbingly confusing than it is funny, an act of desperation to rile up and gross out viewers which only appeases the most immature.

I've never been one to give zero stars to a movie, no matter how awful, because I always to tend to find some small glimmer of amusement in any production, no matter how microscopic. But I must admit, 'A Haunted House 2' is a vile piece of garbage that really tempted me. And I'm still considering it. However, Gabriel Iglesias, Cedric the Entertainer and Affion Crockett did manage a couple chuckles and cracked a smile on an otherwise painfully sorry face. Pressly's prickly mothering skills, or rather lack thereof, also surprised here and there, but overall, this sequel is asinine. Sorry, Marlon, but your parodies are just horrendous.

Universal Studios Home Entertainment brings 'A Haunted House 2' to Blu-ray as a two-disc combo pack with an UltraViolet Digital Copy. The Region Free, BD50 disc sits comfortably opposite a DVD-9, and both come inside a blue, eco-elite case with a shiny, glossy slipcover. After several skippable trailers, viewers are taken to a static menu with music.

Though failing to scare up many laughs, 'A Haunted House 2' haunts Blu-ray with a frighteningly good 1080p/AVC MPEG-4 encode that'll leave viewers shaking in their boots. Shot entirely on the new Sony CineAlta 4K camera system, the picture shows stunning sharp details in nearly every scene. The tiniest object in the distance is crystal clear, every item in the house is plainly visible and each threading and stitch in clothing is precise. Even in the several poorly-lit sequences, fine lines remain resolute and very well-defined. With natural lifelike textures, facial complexions are highly revealing, exposing every pore, wrinkle and negligible blemish in the faces of the cast.

Presented in its original 1.85:1 aspect ratio, the video also arrives with brilliant, crisp contrast levels and deep, rich blacks, providing the image with some appreciable dimensionality. Nighttime interiors are just as impressive as daytime sequences with excellent delineation within the darkest portions of the frame. The palette is richly-saturated with sumptuous, animated primaries expected of the genre and energetic softer hues which enliven the overall presentation. Only minor drawbacks are a few spots with noticeable blooming in the highlights, and in spite of the praiseworthy picture quality, the high-def transfer still comes with that unattractive digital, soap-opera look which tends to distract.

Shockingly, the knowingly low-brow comedy spoof continues to surprise with a DTS-HD Master Audio soundtrack that complements the picture perfectly and even manages to surprise in several spots.

It's a deliberately front-heavy design with crisp, precise vocals in the center, allowing for every stupid utterance and asinine conversation to be heard with crystal-clear clarity. Imaging is remarkably broad with excellent channel separation and a variety of convincing off-screen effects that keep the movie lively and funnily creepy. Dynamic range is extensive with superb clarity in the highs and excellent acoustical details, allowing for plenty of precision in every moment of excited, high-pitched action. The low-end astonishes with powerful, highly-responsive bass that resonates throughout the room and provides scary scenes with palpable, ultra-low weight. (Bass graph) Rear activity could be better utilized, but the few times surrounds are employed are effective and satisfying, making this lossless mix amazingly more fun than the movie itself.

'A Haunted House 2' is a dreadful sequel to an already god-awful movie, and it shockingly seems to want to be worse. And to its merit, it succeeds in spectacular fashion with a series of juvenile gags, moronic cultural references, and offensive vulgarities parading as comedy. The Blu-ray, on the other hand, arrives with an excellent audio and video presentation that's far superior to the quality of the film. Although supplements are very small, they come with a small sense of relief, saving audiences from further suffering. But overall, this is an example of bad flick, good disc.

Sale Price 10.42
List Price 19
Buy Now
3rd Party 3.99
In Stock.
See what people are saying about this story or others
See Comments in Forum
Previous Next
Pre-Orders
Tomorrow's latest releases