Director Errol Morris—winner of the Academy Award®, Best Documentary Feature for THE FOG OF WAR (2003)—offers a mesmerizing portrait of Donald Rumsfeld, the larger-than-life figure who served as United States Secretary of Defense and as the principal architect of the Iraq War. Love him or hate him, you cannot take your eyes off Rumsfeld in this unique kind of cat-and-mouse game of argument and counterargument, evasion and evidence. Morris takes us where few have ever been—beyond the web of words into the unfamiliar terrain of Rumsfeld’s mind. THE UNKNOWN KNOWN presents history from the inside out. It shows how the ideas, the fears, and the certainties of one man, written out on paper, transformed America, changed the course of history—and led to war. 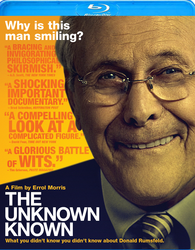 During a conversation that's available as a special feature on 'The Unknown Known,' director Errol Morris claims he wanted to capture something about his film's subject – former Secretary of Defense Donald Rumsfeld – that maybe the world did not already know. Morris goes on to say he hoped to discover why the United States entered into a costly war with Iraq, and to basically help the American people understand why this war went on. That was his goal as a director, at least.  Unsurprisingly, in his interaction with Rumsfeld, Morris wound up with something completely different; something Morris now says is "the strangest interview" he's ever done.

Morris describes his latest work as a film about "self-deception," and that his subject is a man who never really sees himself and what he has done. Much of what Morris claims he was trying to do with the interview – which also touches on bits of Rumsfeld's incredibly lengthy political career and thoughts on various topics to provide depth and context – is not to argue with him on matters of policy, but instead to investigate and reveal that, despite mounting evidence against what he believes, Rumsfeld's beliefs remain intact.

With 'The Unknown Known,' the Academy Award-winning director of 'The Fog of War,' returns once more to the political arena, and specifically the subject of the United States' involvement in certain conflicts. Like his 2003 film, Morris focuses primarily on a single individual in an effort to peek inside his mind and better understand that person's interpretation of the past, especially those moments he was directly involved with. As luck would have it, the film's subject was a prolific taker of memos who also spoke frequently (and elliptically) with the press during the Bush administration's campaign against Iraq, which provides plenty of information and insight into Rumsfeld's thinking at the time. In fact, the title of movie is derived from a somewhat infamous press conference in which Jim Miklaszewski asked the secretary of defense whether or not there was proof that Saddam Hussein and Iraq were in possession of WMDs or were supplying other countries with WMDs. As is shown through archival footage, Rumsfeld deflects the question by going into a discussion of known knowns, unknown unknowns, unknown knowns, etc. When another reporter takes him to task for the non-answer, Rumsfeld goes into another deflection by saying, "The absence of evidence is not the evidence of absence." 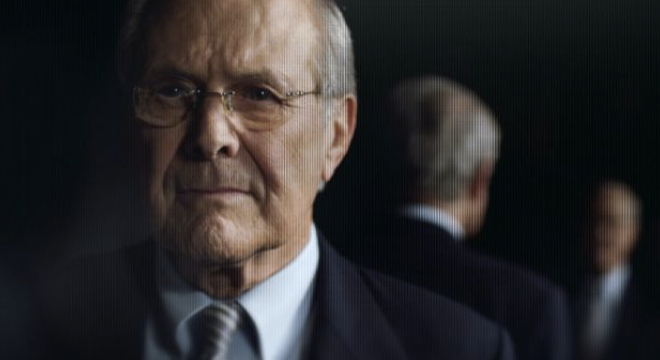 This pseudo-philosophical runaround is consistent throughout the movie, because, as Morris puts it, Rumsfeld "is not telling us anything. He's simply muddying the waters." And those muddied waters are exactly where the film likes to splash around, especially since it spends much of its time examining Rumsfeld's propensity for recording or jotting down thoughts, as it does the process behind the thoughts themselves. Thanks to the propagation of these memos – referred to here as "snowflakes," due to the sheer volume of them, which Rumsfeld believes may be in the millions – there comes the hope of understanding what ultimately led him to make certain evaluations that helped push the United States into war, and then to continue to support those decisions in the face of mounting evidence suggesting the contrary.

Throughout, Morris makes no small allusion to the Nixon White House – of which Rumsfeld was a part – and its now legendary dealings with recording conversations and the president's thoughts, or, as Morris puts it, "the pitfalls of recording too much, or revealing too much." And to that extent, 'The Unknown Known' isn't just looking at Rumsfeld through the Bush administration, post-9/11 world, or even a pre-Iraq War lens; it is attempting to ascertain the way in which Rumsfeld came to the conclusions the came to, and, more importantly, how those ideas are incepted in the first place.

That's a lofty goal for any film, but Morris is quite adept at the task, as both an interviewer and filmmaker. Make no mistake, there is a high production value behind this film for a reason: Morris wants this peek into the mind of Donald Rumsfeld to appeal to the widest possible audience. And so, for every semi-static shot of Rumsfeld and his signature smile, there is a snappy edit, or textual information overlaying archival footage of the subject from several decades past. Morris adds other visual flourishes as well – all making for a far more captivating viewing experience – but it is the inclusion of Danny Elfman's score that paradoxically feels both incongruous and completely appropriate for the tone of the film. Elfman's score evokes everything from 'Batman' to 'Edward Scissorhands' to 'Alice in Wonderland' – the latter seemingly most appropriate for the tenor of Morris' interview with Rumsfeld.

And yet, at a certain point, when an interview film like this, which lives and dies on the significance and import of its topic, features such a slick presentation, it can sometimes be more interesting from a structural standpoint. That's not to say the film doesn't look great, or that it would have been better off with a far more austere appearance, but rather that Morris seems to be subverting certain structural expectations in such a way that the film indirectly points the audience toward a slightly-veiled estimation. He's not arguing and he's not shaming. Instead, Errol Morris is pointing out the sometimes-strange nature of government and how ways of thinking and policies and intensely traumatic events can lead to decisions that may never be fully explained because those making the decisions feel obliged to do so in the most oblique manner possible.

For his part, Rumsfeld fires back at Morris, suggesting that the director "[loves] the word 'obsession,'" and that the director's question of why the former secretary of defense agreed to do the interview is "vicious." Of course, when he finally does answer, Rumsfeld simply smiles at the camera and states he's darned if he knows, leaving the audience to wonder whether that particular unknown or any other unknown, as the case may be, is actually as unknown as he purports. 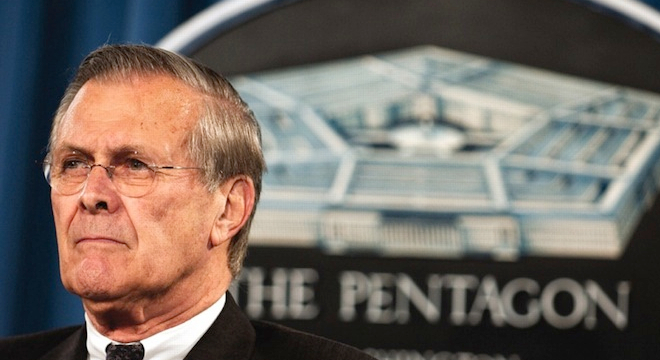 'The Unknown Known' comes from Anchor Bay as a single 50GB Blu-ray disc in the standard keepcase. The disc will auto play several previews, all of which are proceeded by a frustratingly lengthy Anchor Bay logo that you cannot skip over. Moreover, the disc does not automatically resume at the last place it left off if you stop it or remove the disc from your player. The top menu is relatively simple, allowing the viewer to choose the film, a few audio options, or special features. 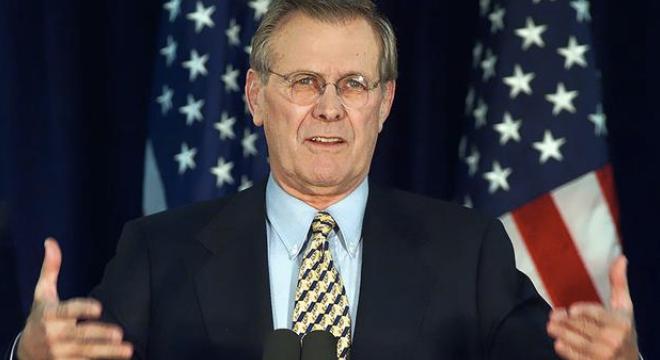 Between the actual interview, the archival footage and news reports, 'The Unknown Known' features a several different formats all rolled into one package, and the 1080p AVC/MPEG-4 encoded transfer does a very nice job in presenting them all with high levels of clarity, depth, and detail. The film is as much about the way it is presenting the information as it is about the information itself. In that sense, there are several instances where effects are used to follow words as they are seen on some sort of screen-sized memo, or as the words of newspapers past scramble over the screen like a reporter scanning decades worth of microfiche, as Rumsfeld walks while having a conversation with Nixon. All the footage appears clean and precise, making the transition between the extreme close-up with the interviewee and the archival footage less drastic and more cohesive with the film's overall presentation.

Fine detail is very high in the interview; facial features are on full display, as are small textural elements. Color is consistent, leading to accurate skin tones despite a hint of filter in many shots. Contrast is very high. Black levels are robust and inky, creating fine edges in almost every case. There are a few instances where banding is a significant issue, though, which does take the overall image quality down a notch. Crush, however, is not an issue.

All in all, this is the kind of presentation you would expect from an interview or documentary film such as this. The pieces look great put together, and are only marred by the presence of some unpleasant and sometimes distracting banding. 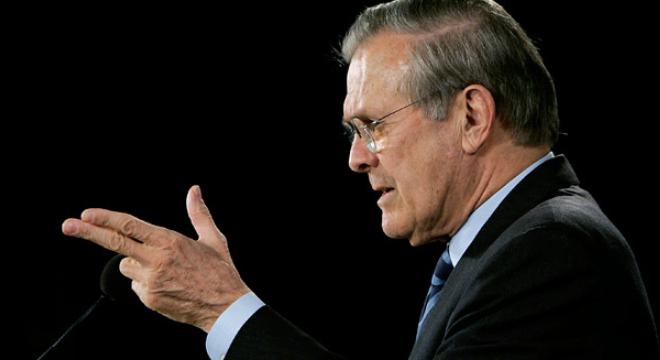 The DTS-HD Master Audio 5.1 mix sounds fantastic from start to finish. The dialogue is clean, precise, and easily understood at a variety of volume levels. And while there is little to report on things like sound effects (though there are some) or atmospheric elements, the mix still manages to produce an immersive effect because of the way it underlines nearly everything with Elfman's typically dreamlike, slightly whimsical score. The effect, then, is a surprisingly robust mix for a film that is really just about Donald Rumsfeld talking.

Most of the dialogue is presented through the center channel, but there are occasions when slight shifts move it around a bit, giving some added depth. Occasional sound effects play a small, but crucial role in the mix, offering unexpected flourishes that add to the end product in surprising ways. Again, though, it is how Elfman's score is used though various channels and the way in which it seems to seep through the front and rear channels that really give this film a surprisingly cinematic feel and a very nice sounding mix. 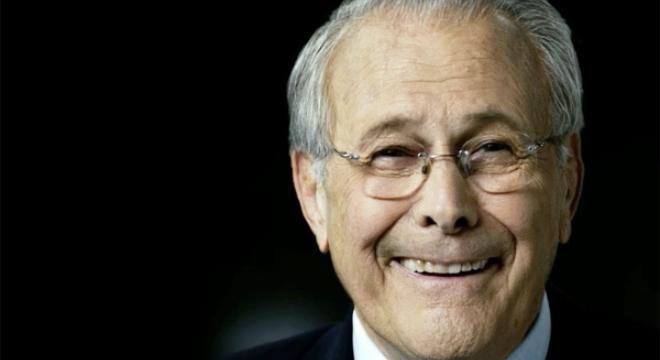 Feature Commentary with Director Errol Morris – Ever wanted more Errol Morris in your Errol Morris films? This commentary may just give you that. Here, Morris offers some additional insight into the making of the film, as well as his impression of the information that is being given by Donald Rumsfeld.

A Conversation with Errol Morris (HD, 8 min.) - Strangest interview I have ever done.

Third Annual Report of the Secretaries of Defense (1989) (SD, 57 min.) - recorded on December 1, 1989 at the Tennessee performing arts Center in Nashville. Theme of the conference is US defense beyond the Cold War. Attending the conference are folks like Robert McNamara, Caspar Weinberger, Donald Rumsfeld.

This is a printed excerpt from Morris's work about Rumsfeld.

'The Unknown Known' will have as many people shaking their heads as it does wholly captivated individuals. There is a great deal of information to parse, and, for better or worse, it feels like Morris only gets to scratch the surface here – but then again, that's sort of the point of the film. While the contentious nature of the film's subject will likely stir up many an argument, it may also lead to some interesting, respectful, and levelheaded conversations about governmental power and the potential misuse of it as well (probably not on the Internet, or in any comment section contained therein, but maybe, just maybe in someone's home somewhere). Like the subject or loath him, this is an interesting and sometimes insightful interview that deserves to be seen. With good picture, great sound, and some valuable extras, this one definitely comes recommended.

Sale Price 12.69
List Price 17.99
Buy Now
3rd Party 8.15
In Stock.
See what people are saying about this story or others
See Comments in Forum
Previous Next
Pre-Orders
Tomorrow's latest releases