When the school year ends, five friends from a small Ukrainian village decide to travel to Kiev. Their trip is cut short when German aircraft attack and their town falls under occupation. While many escape to the hills to form an anti-Nazi resistance group, a German doctor, Dr. Otto Von Harden (Erich von Stroheim), begins to use the children for medical experiments and as sources of blood transfusions for wounded German soldiers. Directed by Lewis Milestone (All Quiet on the Western Front), this story of valiant resistance stars Dana Andrews (Laura), Anne Baxter (All About Eve), and Walter Huston (The Treasure of Sierra Madre) as the Russian doctor who discovers the nefarious German plot. In 1943,The North Star was nominated for six Academy Awards. 'The North Star' (1943) was re-released in the midst of the Cold War as 'Armored Attack!' (1957). The original references to the allied Russian military were excised and an overtly anti-Communist narration track was added. This disc includes the original theatrical cut, 'The North Star,' which runs 30 minutes longer and preserves Milestone's initial version of the film before these politically-motivated changes were made.

Originally titled 'The North Star' at the height of World War II, Lewis Milestone's film is a stunning, sensational motion picture about the bravery of inexperienced farm villagers taking up arms to defend their family and land against the Nazi invasion. Along with several other movies, the 1943 war drama would become the center of controversy in the 1950s, forcing producers to heavily reedit and retitle the film for its rerelease as the now-familiar 'Armored Attack,' which I will get to later. But more importantly is the appreciation for the Oscar-nominated original 106-minute cut, which frankly is the one that rightly deserves recognition. Working from an original screenplay by Lillian Hellman, the legendary director of other classics like 'All Quiet on the Western Front,' 'Of Mice and Men,' 'Ocean's 11 (1960)' and 'Mutiny on the Bounty' delivers a poignantly magnificent and splendidly exhilarating story with spectacular action.

Of course, the movie is the typical propaganda war picture, made largely with the intention to motivate and inspire viewers to support the war effort. And as such, the narrative follows a decidedly manipulative formula, specifically designed to affect the audience's pathos, which could be argued as its major drawback. Honestly, the point would be valid since the film opens with idyllic, pastoral depictions of an agricultural community in near-Utopian peace. Neighbors greet each other with formal greetings, the young respect their elders and are so blissfully content with their way of life that they even break out into the occasional song. Perfection is soon disrupted by German aircrafts invading the Soviet Union, bringing with it a dark cloud of oppressive fear and endless alarm. Like Alberto Cavalcanti's 'Went the Day Well?' a year earlier, the plot suddenly turns disturbingly dark and bleak as the casualties of war extend to innocent children.

In spite of its unabashedly exploitative design to influence audience opinion, the elegance and appeal of 'The North Star,' aka 'Armored Attack,' is its remarkable production. From the art direction and the music of Aaron Copland to the editing and the special effects, the film is a marvel to watch from one scene to the next. German planes are seen on screen swooping down on unsuspecting bystanders, showering the otherwise peaceful town with the horrifying sounds of bullets, bombs and the wailing cries of the innocent. The optical effects are noteworthy because they are so seamless and realistic for the period, astonishing visuals that could rival the CG imagery of many contemporary movies. One of its most impressive aspects, for me, is the exceptional camerawork of James Wong Howe, legendary cinematographer 'Hud,' 'Sweet Smell of Success,' 'Picnic,' 'The Rose Tattoo,' and many more. Here, he captivates with early brightly-lit picturesque scenes full of zest which are slowly engulfed by oppressive, disheartening shadows, transforming the set decoration of Perry Ferguson and Howard Bristol into dreary, cheerless sights. 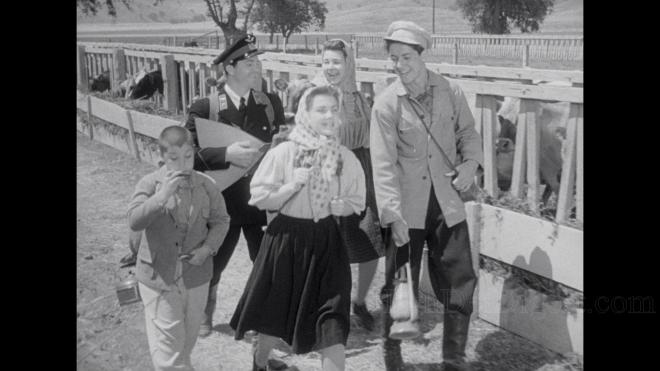 During Senator McCarthy's "Red Scare" era, Milestone's 'The North Star' ironically became the victim of a paranoia-induced propaganda machine, serving as evidence for the ignorant and film-illiterate of Hollywood's so-called "Socialist" agenda. And sadly, such deluded suspicions have not entirely disappeared today. In 1957, after being reedited to include mentions of Hungarians revolting against the Soviet Union, the film was rereleased as 'Armored Attack!' The 82-minute version is not only different in its narrative structure — with an opening credit sequence that shows the Nazi army about to invade and removing 20 minutes of village life — but also feels significantly altered in tone and intention. With off-putting narration throughout, Milestone's picture was transformed into a typical war actioner that ends with a blatant and needless anti-USSR message.

When watching, it is 'The North Star' which should be enjoyed and admired while 'Armored Attack!' should serve as a footnote and curiosity of American cinema, not as it's being promoted and packaged here.

Originally distributed by RKO Radio Pictures but later rereleased through National Telefilm Associates, 'Armored Attack!' comes to Blu-ray courtesy of Olive Films. The Region Free, BD50 disc is housed inside the standard blue case and at startup, goes straight to a static screen with only two menu options.

Olive Films brings the war drama to Blu-ray with a good-looking 1080p/AVC MPEG-4 encode (1.37:1), though it still suffers from the usual assortment of white specks, dirt, scratches and mild softness. There is also the occasional poorly-resolved sequence due to the age and condition of the source rather than a fault of high-def transfer. Thankfully, they don't ruin the overall presentation, as fine lines are sharp and distinct throughout. Textures in the clothing and faces are lifelike and very well-defined with plenty of excellent clarity in Howe's splendid deep focus photography. Contrast can at times run hotter than normal, creating a bit of posterization in a few scenes, but the video is for the most part crisp and comfortably bright. Black levels are rich and often luxurious with strong detailing within the darkest portions of the frame.

In the audio department, the presentation falters a tad and is mostly average, whether it's the shorter reedited version or the longer original film. Unfortunately, between the two films, the latter is the least pleasing, exhibiting lots of hissing, noise, crackling and the intermittent loud pop in the DTS-HD MA soundtrack. The volume also tends to fluctuate, which can be a bit distracting. Although the former is cleaner with better audible activity in the background, the lossless mix nonetheless feels narrow and lacking presence. It, too, comes with mild hissing and popping. Dynamic range and acoustics are clean and detailed but not particularly extensive. In fact, action sequences reveal a tad of noise in the higher frequencies while bass is generally muddy and indistinct. On the plus side, vocals are very well-prioritized and intelligible from beginning to end.

Originally titled 'The North Star' at the height of World War II, Lewis Milestone's film is a stunning, sensational motion picture about the bravery of inexperienced farm villagers taking up arms to defend their family and land against the Nazi invasion. In 1957, after being reedited to include mentions of Hungarians revolting against the Soviet Union, it was rereleased as 'Armored Attack!' due to pressure from paranoia-induced propaganda fervor, and it is decidedly the weaker of the two versions. The Blu-ray from Olive Films arrives with a strong though slightly troubled audio and video presentation. Nevertheless, with pleasing enough bonuses, the overall package makes for a nice addition to the collection.

Sale Price 19.46
Buy Now
3rd Party 19.46
In Stock.
See what people are saying about this story or others
See Comments in Forum
Previous Next
Pre-Orders
Tomorrow's latest releases