A rebel girl signs up a group of cheerleaders to help her take down the captain of their high school football team, but a supernatural turn of events thrusts the girls into a different battle. All Cheerleaders Die is written and directed by McKee and Sivertson and produced by Andrew van den Houten and Robert Tonino, with music by Mads Heldtberg.

Lucky McKee has a history of making films predominantly focused on female characters. Anyone who has seen one of his more notable films – i.e., 'May' and 'The Woman' – is likely aware the gamut those characters can run, as they circle around the various structural conventions and ideas of gender, sexuality, and societal exclusion through what is ostensibly the horror genre. Women's experiences in male-dominated world are topics McKee comes back to time and again, regardless of how successful he is in each feature. As such, it should not come as much surprise that the writer-director would then revisit one of his past films with 'All Cheerleaders Die,' a remake of his 2001 effort that deals with notions of feminism in the male-dominated environment of high school athletics.

For obvious reasons, there's a hint of 'Bring it On' in the early parts of 'All Cheerleaders Die,' as the film find its bearings via a string of first-person encounters protagonist Maddy (Caitlin Stasey) has with the cheerleaders and members of the football team – the two elite groups at Blackfoot High. Both the nod (deliberate or otherwise) to another cheerleader-centric film and Maddy's running around with a video camera, help create a sense of self-awareness in the film that brackets the supernatural and the familiar in such a way that they both serve the theme of alienation and retribution rather well.

After Maddy's camera captures the startling, accidental death of the head cheerleader – who, naturally, was dating Terry Stankus (Tom Williamson), the school's resident jock/misogynist – the film shifts forward in time, introducing the audience to a different, more confident Maddy who has seemingly shed her feelings of estrangement and is now wholeheartedly pursuing a place on the cheerleading squad. Questions regarding Maddy's emotional shift are almost as pressing as the questions surrounding her new goal, which initially seems to be a part of the shallowness that she was initially documenting/challenging on during the film's opening sequence. 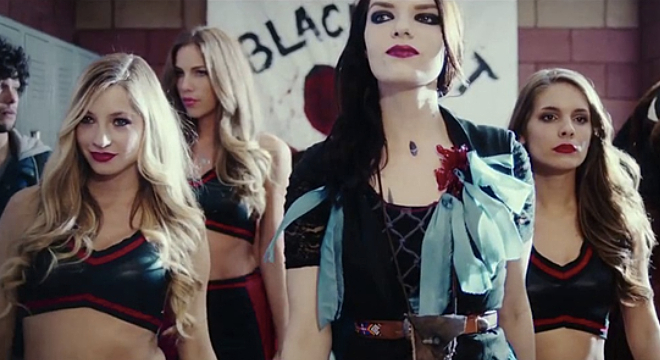 But the shift has unintentional consequences. For one, Maddy leaves behind Leena (Sianoa  Smit-McPhee), a fellow outcast and resident Wiccan, and pursues a romantic relationship with Tracy (Brooke Butler), another cheerleader who opens up to Maddy about dating Terry following the death of his girlfriend.

Maddy's reasons for becoming a cheerleader are also tied to Terry, but for less amorous reasons.  This leads the cheerleaders to wind up at a late-night party in the woods with the members of the football team that apparently can't get enough of one another. After a confrontation with Terry, the party turns violent, and girls end up in a fatal car crash, only to be resurrected and transformed into a pack of succubi by Leena and her bag of magical rune stones.

At that point, the film shifts gears into a full-on, campy supernatural revenge drama, complete with glowing stones in the girls' neck, back, or head, not to mention various other unforeseen complications stemming from Leena's amateur spell casting. For instance, the squad's two sisters, Martha and Hanna Popkin (Reanin Johannik and Amanda Grace Cooper, respectively) wind up switching bodies, so the oversexed sibling winds up in the body of the ultra-religious one, and sexual hijinks ensue on the high school campus. The scene plays out as a subversive act, in which the traditional structure of a high school sex comedy is turned inside out, and gender roles and the genre conventions of sexual desire/potency are briefly swapped.

And while McKee entertainingly blends tropes with horror, comedy, revenge, and coming-of-age tales, the sexual politics of his story become incredibly blunt after an enjoyably coarse and energetic second act. At this point, the film develops its strongest sense of plot, when the girls begin to share a powerful bond that goes well beyond surviving death with one another. When one young lady goes too long without eating, or experiences yet another traumatic event at the hand of a male aggressor, her companions are crippled with pain – which the film uses to play off the notion of women's menstrual cycles synching up with one another. In that sense, if one woman wants to survive, she has to ensure the safety of those around her as well; they have to align themselves against a common foe.

And yet, as the film pushes on into its third act, it is caught between demonstrating the unfortunate power of the men and the institutions these women are fighting against, and setting up an unnecessary sequel with the revelation that Leena's powers can do more than resurrect the recently departed by putting a magic stone in their body. This focus on setting up a continuation of the story saps the denouement of its impact, as Maddy and Leena rediscover their initial bond, but the film seems unsure of which woman it wants to direct the audience's feelings toward. Ultimately, both characters wind up being given short shrift in terms of development and a satisfying arc.

Despite its shortcomings, 'All Cheerleaders Die' is at its best when it goes full-throttle on its campiness. There are clear feminist undertones throughout the film, and as compelling as they can be, the effectiveness of these elements is often as uneven as the movie itself. Sometimes themes are made too blatant, while at other times it's unclear whether the film has a particular audience in mind for its ideas and their execution. It is easier to appreciate a movie that has ideas, though, even when it might not express them as eloquently as it wants. In that sense, McKee is working with common themes, but like the story itself, those themes and ideas can sometimes feel unfinished. 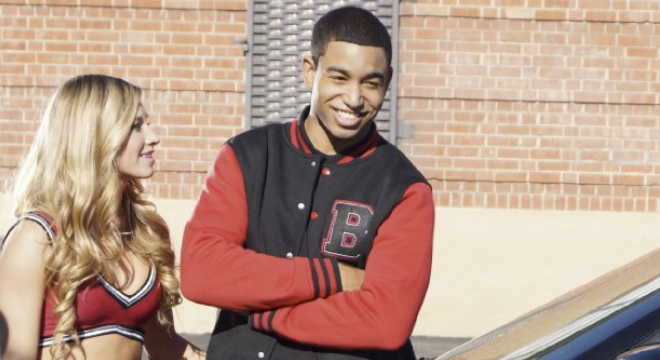 'All Cheerleaders Die' comes from RLJ as a single 25GB Blu-ray disc. There are a handful of previews ahead of the film, but otherwise the behind-the-scenes featurette is the only special feature to accompany the film.

The 1080p AVC/MPEG-4 encoded transfer brings a nice, but sometimes-sterile image to the screen. As is the case with certain low budget films like this, 'All Cheerleaders Die' has all the benefits of a high definition image, but the artlessness of the cinematography and the limitations of the filming itself create a mostly sharp, mostly detailed image that is otherwise uninteresting most of the time. That can make it difficult to enjoy what is technically an above average picture. Fine detail is present most of the time and textures are detectible even from a distance.

Contrast is high for the most part, as black levels produce inky shadows and full-bodied darkness. There are a few moments, however, where shadows can swallow some of the detail and that darkness tends to bleed out into objects that would otherwise be clearly visible. There is little in the way of banding or crush however. On the other end of the spectrum, whites are more even. They tend to run a little hot during the daytime sequences, but never look totally blown out.

This is a surprisingly colorful movie at times, and the image manages to make the cheerleaders' outfits pop – especially their red accents. Other colors are all strong and vibrant without being over saturated or looking out of place in an otherwise dark film.

The DTS-HD Master Audio 5.1 is a nice sounding mix that delivers strong dialogue and manages to balance it well against the occasional atmospheric noise, sound effect, or music. Voices are all clear and crisp, and resonate well depending on the requirements of the scene. In that sense, Maddy having a conversation sounds as good as Leena's ear-piercing scream. Sound effects are rather robust; things like car engines, crashes, and the ever-present act of violence are all appropriately impactful.

The atmosphere is somewhat lacking, though, as the bustling halls of a high school or the woods where an ill-fated party feel somewhat desolate, despite the activity seen in them. Ambient noise seems to be at a lower level or not present at all in key places, making the film sound surprisingly uninhabited.

Big moments tend to utilize all channels at their disposal, however, with the center speaker handling most of the dialogue and the front channels presenting strong effects and score. The rear channels pick up a few extra bits of both for a limited, but still immersive experience.

Making the Squad: A Behind-the-Scenes Look at 'All Cheerleaders Die' (HD, 24 min.) – This is a surprisingly comprehensive behind-the-scenes look at the film that features interviews with the cast and crew and a few peeks at the set during filming.

'All Cheerleaders Must Die' could have done more to balance its camp with its more intriguing feminist undertones, but the film still offers an entertaining product that has clearly set is sights on becoming a more extended story. Should that occur, perhaps the movie itself will become something more, when combined with a larger story. With decent image and good sound, this will probably be a good rental for horror fans or fans of McKee's work.

Sale Price 14.99
List Price 29.97
Buy Now
3rd Party 9.67
In Stock.
See what people are saying about this story or others
See Comments in Forum
Previous Next
Pre-Orders
Tomorrow's latest releases