<p>In the dark days of World War II, the Nazi High Command ordered its scientists to create a top secret race of indestructible zombie storm troopers - un-living, unfeeling, unstoppable monstrosities that killed with their bare hands. They were known as The Death Corps. No member of this horrific SS unit was ever captured by Allied Forces - and, somewhere off the coast of Florida they have survived...</p>
<p>Peter Cushing (The Curse of Frankenstein), Brooke Adams (The Dead Zone) and John Carradine (The Howling) star in this suspenseful and genuinely creepy shocker co-written and directed by Ken Widerhorn (Return of the Living Dead II) - one of the great horror "sleepers" of the 1970s. </p>

As the old-school punk motto once chanted, most notably by Scottish band Oi Pollio, "The only good Nazi is a dead Nazi." And in the case of the 1977 cult horror classic 'Shock Waves,' a dead Nazi creepily rising from his watery grave and slowly lumbering to the shores of a mysterious Caribbean island is better still. Best of all is filmmaker Ken Wiederhorn, who later went on to direct other cult favorites 'Eyes of a Stranger' and 'Return of the Living of the Dead Part II,' giving audiences not one but a small squad of dead fascists. Dressed in full SS regalia, though missing their sharply ornate hats yet the uniforms appear in mint-condition despite decades of salt water, the awakened corpses of Schutzstaffel soldiers kill indiscriminately and with callously cold indifference, as Nazi zombies are expected to do. There isn't rhyme or reason for their sudden, unprovoked return, but these walking dead soldiers are still fighting a war long lost.

Even their commander, played by the incomparable Hammer Films legend Peter Cushing ('The Hound of the Baskervilles,' 'Horror of Dracula,' 'The Curse of Frankenstein'), is baffled by the return of the soldiers and their intent to kill everything in sight. When pressed for information, the former Nazi officer spends a few minutes in his baroquely clean and prim office explaining that he is the last remaining survivor — or at least, until now — of a top-secret experiment to reanimate the dead into weapons of chaos called the "Death Corps." At the film's start, voiceover narration blathers the premise as if based in reality due to the Third Reich's fascination with the occult, a darkly twisted experiment that ended in mystery. As if Cushing's presence weren't enough to give the limited production some legitimacy, the iconic and beloved actor's performance adds gravitas to the silliness, speaking with notable distress over the fate of everyone. 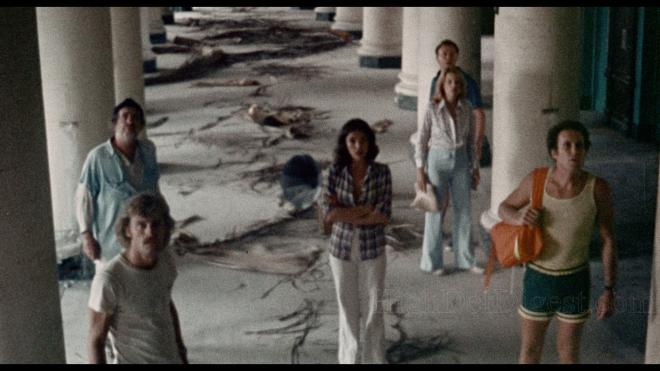 Those partaking in this wonderful misadventure of zombie Nazi mayhem are a ragtag group of American tourists, initially led by a funnily crotchety old skipper, played by another legend of the silver screen and horror John Carradine ('The Grapes of Wrath,' 'Johnny Guitar,' 'Houses of Dracula,' 'House of Frankenstein'). After being pushed off-course by a disturbingly skeleton-like ghost ship and crashing into nearby reefs with the captain nowhere to be found, second in command Keith (Luke Halpin) takes charge of the five remaining survivors. Before her star-turning roles in 'Days of Heaven' and 'Invasion of the Body Snatchers (1978),' Brooke Adams delivers her an excellent performance as Rose, a yellow bikini-wearing woman who only wanted a relaxing vacation but also got a lesson on zombie survival. Fred Buch is the seemingly tough and resourceful type while Jack Davidson and D.J. Sidney are an unhappily married couple, and Don Stout provides some humor as the ship's grumpy cook.

On the surface, 'Shock Waves' should play out much like a typical genre flick — rotting corpses slaughter unwitting victims in various gruesome ways. But what makes the movie a fun watch and deserving of its following is Wiederhorn's direction, along with being the last of its kind, by which I mean a production that emphasized atmosphere and creeps over graphic violence and buckets of gore. So, fanatics of the contemporary zombie are warned to look elsewhere. Released a year prior to George A. Romero's 'Dawn of the Dead,' Lucio Fulci's 'Zombi' and what basically marks as the start of the brutal "slasher" era, Wiederhorn's film takes a more subtle and restrained approach, setting the mood and stage while building the suspense and a disquieting air of worry. Though not groundbreaking, Wiederhorn brought style to what essentially amounts to standard B-movie material, which in effect established a new subgenre.

Blue Underground brings 'Shock Waves' to Blu-ray on a Region Free, BD50 disc housed in the standard blue keepcase with a cardboard slipcover. At startup, the disc goes straight to the usual selection of menu options with full-motion clips and music playing in the background.

Much like the zombies featured in the movie, Ken Wiederhorn's cult classic trudges its way onto Blu-ray shores with a seemingly weak and ugly 1080p/AVC MPEG-4 encode. Then again, the movie has never been much of a looker to begin with, so viewers are best to keep expectations reasonably low, especially since it was originally shot in 16mm film stock. However, this brand-new master from the best available elements is a massive improvement over its 12-year-old DVD counterpart and appears to be true to its source.

Though not particularly impressive, contrast is fairly bright and well-balanced while blacks are surprisingly deep and consistent. Unfortunately, shadows during several low-lit sequences come off like dense globs that ruin the finer details. Although not bold, colors are cleanly rendered with warm skin tones throughout, which is quite nice and a welcomed step up. With a noticeably thick but stable grain structure, most of the 1.85:1 image is flat and very soft, especially during the many interior scenes. When outdoors, the high-def transfer offers some strong definition and resolution in the clothing, surrounding foliage and in the zombie makeup.

Where the presentation really succeeds is in the audio department, thanks to a rather good and engaging DTS-HD MA mono soundtrack. However, as with the video, expectations should allow for some consideration to the production's limited budget and time period. With that in mind, the lossless mix is nevertheless a fun listen with lots of background activity heard throughout, such as the island's local wildlife or the echo of voices ringing in an empty room. The mid-range is surprisingly dynamic and detailed, exhibiting clean separation between the various sounds and particularly in Richard Einhorn's haunting score. There isn't any bass to speak of, but with precise, well-prioritized vocals in the center, the high-rez track is a definite upgrade over previous releases, which will satisfy fans.

On the surface, 'Shock Waves' should play out much like a typical genre flick — rotting corpses slaughter unwitting victims in various gruesome ways. But what makes this movie a fun watch and deserving of its following is Ken Wiederhorn's atmospheric direction while stars Peter Cushing, John Carradine and Brooke Adams provide great performances. The Blu-ray arrives with an average but faithful picture quality, a strong audio presentation and a welcomed assortment of supplements. The overall package makes for a nice addition to the cult collection.

Sale Price 22.52
Buy Now
3rd Party 21.01
In stock. Usually ships within 4 to 5 days.
See what people are saying about this story or others
See Comments in Forum
Previous Next
Pre-Orders
Tomorrow's latest releases