Peter Gabriel: Back To Front - Live In London

This spectacular live concert, filmed at London’s O2 using the latest Ultra High Definition 4K technology, captures Peter Gabriel’s celebration of the 25th anniversary of his landmark album "So." To mark the event Gabriel reunited his original "So" touring band from 1986/87 and for the very first time fans saw them play the multi-platinum selling album in its entirety.  As a bonus, Back To Front includes ‘The Visual Approach’, a fascinating feature on the creation of the live show, the track “This Is The Picture” as filmed by fans on the night, and a montage version of “In Your Eyes”. While the core of the performance is the "So" album, there is so much more to the concert with unfinished, previously unreleased and re-imagined songs sitting effortlessly alongside classic hits reflecting what a multi-dimensional artist Peter Gabriel is. With innovative lighting and staging,' Back To Front – Live In London' offers a visual and narrative feast that puts the viewer inside a concert like never before.

In 2012, Peter Gabriel took to the stage once again, embarking on the kind of tour that few artists are afforded the opportunity to without also having to navigate a huge dose of irony. Rather than touring to promote a new album, Gabriel was celebrating the 25th anniversary of the highly influential, memorable, and oft-referenced album 'So,' performing every song on the release in its entirety (as well as a handful of other Gabriel hits). With 'Back to Front,' the often experimental musician engaged in another experiment of sorts: to see how the album, as a whole, worked a quarter century later – both as a piece of pop music revisited, and as a new highly technical stage production.

But this isn't some kind of Lucasian tinkering with something many regard as perfect just the way it is. Instead, as it looks to the past, 'Back to Front' works more as an exploration into how an album like 'So' managed to come together in the first place, and as such, the actual presentation of the show – i.e., the way Gabriel and his band's performance is broken up into three distinct acts – is intended to be representative of the creative process, moving the production from intangible, unfinished creation to the stylized precision of material that has endured for more than two decades.

The concert was filmed live in London over two nights, and features Gabriel reuniting with the bandmates who collaborated with him during the original 'So' tour between 1986 and 1987. He welcomes guitarist David Rhodes, keyboardist David Sancious, drummer Manu Katché, and bassist Tony Levin to the stage after he and Levin perform a stripped down and purposely unfinished rendition of a new song titled 'Daddy Long Legs.' The intention is for the concert to begin, as Gabriel's own creative process might: working out the kinks of a song to see where it may one day end up. It's a clever way to begin a concert such as this, as it creates a sense of transparency between the artist and his audience, while also showing a sort of vulnerability – in the sense that something incomplete is being tested and could wind up a total disaster – that feels uncommon for someone of Gabriel's stature and, especially, for a concert of this magnitude. 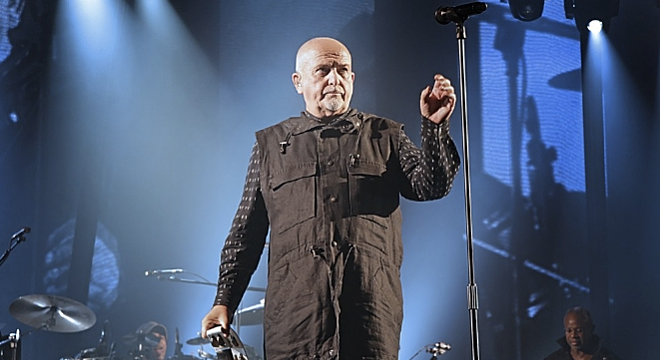 Once the entire crew (and some backup singers) is present, the presentation moves to a more familiar place, segueing first into 'Come Talk to Me' and then the easily recognizable 'Shock the Monkey.' As he and his band move their way through the list of songs, including the moving 'Solsbury Hill' and the darkly atmospheric 'Red Rain,' the intensity of the production increases, gradually underlining the impact of each performance with mounting levels of theatricality. By the time the show has moved through 'Sledgehammer' and finally turned the corner on the showstopper 'In You Eyes,' 'Back to Front' essentially works as a crash-course on Gabriel's influence on popular music.

Some performers can do a lot with very little, bringing a unique kind of honesty to a performance that delivers power in a very small package. Here, Gabriel demonstrates how one can do even more with a lot. 'Back to Front' is incredibly theatrical from beginning to end, right down to the industrial jumpers worn by everyone on stage that makes the ensemble look a little like futuristic sanitation workers. Sure, some of it – especially Gabriel's double-fisted-hammer-move with the mic during 'Digging in the Dirt' – may feel too stagy, too pretentious, or too much, but it's all just a part of the show's superbly balanced sense of showmanship. That understanding of delivery and presence plays up the notion that Gabriel should exude a certain amount of confidence (given that he's performing arguably his best material) and that, in order to give the audience a takeaway greater than "I saw Peter Gabriel," there needs to be a little risk, and a lot of demonstrative performances.

Here, Gabriel and his terrific collection of material manage to offer a great deal of both. 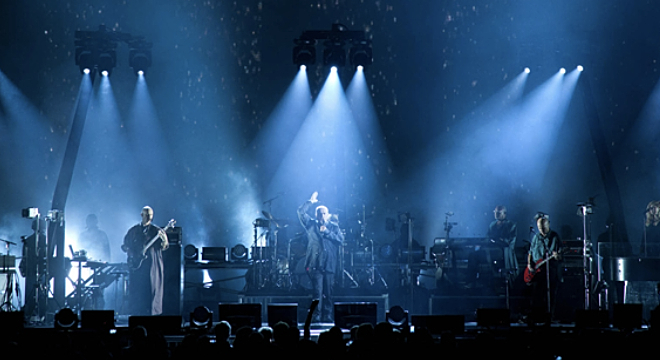 'Back to Front: Peter Gabriel: Live in London' comes as a single 50GB Blu-ray disc in the standard keepcase. The insert works a little like the back of a CD (does anyone buy those anymore?) wherein the track list is broken down for quick reference. Also included is a small booklet featuring an overview of the tour itself and several photos of Gabriel and his band performing. The disc has two choices for audio, which should delight fans looking to play as a straight musical disc, as well as a concert video. To make things easier, the disc features an simple interface that displays all the tracks like chapters in a film, without interrupting the concert, allowing viewers to move through songs without going back to the home menu.

'Back to Front' has been given a crystal clear 1080p AVC/MPEG-4 encoded transfer that could definitely be called a crowd pleaser. Gabriel's stage was outfitted with plenty of cameras, to capture his performances from a myriad of angles, which, along with the clever editing, makes for an intense concert-going experience (albeit one that is enjoyed from the comfort of your living room). The image contains a considerable amount of fine detail that remains consistent throughout. Facial features are on full display, as are textures in clothing and various elements around the enormous stage. Along with the detail, color is bright and vibrant, even though the palette is consists mainly of dark navy blue, gray, and black. Skin tones are lifelike throughout, never running too red or causing anyone to look pallid or sickly.

The most impressive aspect of the image, however, is the way it handles the constantly changing light – which shifts from almost pitch black to blinding white light in the blink of an eye. And yet, the transfer here handles it with great aplomb. The flashing lights are free of noise, darkness is inky and full-bodied thanks to the incredibly high contrast levels, and the image overall is free from signs of crush or banding of any kind.

As far as concert videos go, 'Back to Front' offers a top notch viewing experience to go along with the fantastic listening one.

As mentioned above, the disc offers listeners their choice of DTS-HD Master Audio 5.1 or an LPCM stereo track. Unsurprisingly, both offer clear, consistent, and dynamic sound that play to the strengths of the music on display. Gabriel's vocals – whether he's singing or addressing the audience – are crystal clear and distinct throughout. The audio does a fantastic job of balancing every piece of the mix so that it is highlighted at the precise moment it needs to, or becomes a part of a dynamic whole.

The music is presented brilliantly, and it is spread out across all channels evenly. Most of the instrumental aspects are front-loaded, while more subtle accents and the like are presented through the rear channels. Sound shifts slightly as the camera moves – though it's never distracting or unnecessary. When the camera pulls back to the far rows of the audience, the sound feels more spread out, while up close, it accentuates the individual in frame. The mix also makes good use of LFE from time to time, adding another layer of depth to bass-heavy portions.

Overall, this is exactly the kind of sound fans want to hear from a concert video of any kind, let alone one that is as technically proficient as this one.

The Visual Approach (HD, 6 min.) – Gabriel and Peter Sinclair offer some insight into how they handled the filming of the concert and why staging played such an important role.

Gabriel was inducted into the Rock and Roll Hall of Fame in 2014, making the 'Back to Front' tour something of a precursor to a prolonged celebration of the musician's many achievements, accolades, and, in this case, the unforgettable collection of songs from what is arguably the strongest album in his catalogue. This disc is great for longtime fans or for those who might be curious about the guy whose song played such an important role in 'Say Anything.' With terrific video and truly awesome sound, this one comes recommended.

Sale Price 32.11
Buy Now
3rd Party 32.11
In Stock.
See what people are saying about this story or others
See Comments in Forum
Previous Next
Pre-Orders
Tomorrow's latest releases