Unable to afford proper care for his sister dying from kidney failure, Ryu turns to the black market to sell his own organs only to end up cheated of his life savings. His girlfriend urges Ryu to kidnap the daughter of wealthy industrialist Dong-jin, who recently laid him off. Ryu agrees, but unforeseen tragedies turn an innocent con into a merciless quest for revenge. Bound by their personal losses and deep-seated anger, the two men are thrust into a spiral of destruction.

Violent, gory and somewhat disturbing as 'Sympathy for Mr. Vengeance' may be, the scene which actually crawls under my skin and I find most unsettling is the moment when Song Kang-ho ('The Host,' 'Thirst,' 'Secret Sunshine') watches the autopsy of his only daughter. Why any parent would want to see such a thing — let alone be allowed in the room while performing the procedure — is mindboggling. But there's a point to this rather far-fetched scene, which is not surprising coming from a highly-talented filmmaker like Park Chan-wook. Since his debut feature 'The Moon Is …' and up to his most recent 'Stoker,' he has demonstrated a remarkable, visually surreal flair and expertise behind the camera, a genuine visionary of emotional depth through the simplest shots.

In this astonishing revenge/vigilante thriller, the first in a trilogy aptly named 'The Vengeance Trilogy' and which includes 'Oldboy,' Park's genius as a director is in full evidence in nearly every scene and harrowing conversation. To see his gift on display, and arguably a good starting point for appreciating his intentions, we need only look at this very disquieting moment of a father in painful disbelief. As Dong-jin, an unsympathetic, wealthy business man from the little we saw of him before his daughter's death, Song reveals his emotional breakdown and agitation in his eyes. Park's camera is a motionless mid-shot, staring at him as we hear the sickening sounds of a child's body being opened and examined in the background. As the procedure continues, allowing our imagination to see what we actually don't see, we never leave his side.

It's an extraordinarily effective sequence of simplicity that's both beautiful and repugnant in equal measure, giving rise to the heart of the plot, which Park co-wrote with three other writers. In this one splendidly minimalist and seemingly effortless moment, audiences instantly sympathize with the father and the actions he is about to take, more so than words or logic ever could. These are characters driven by their emotions of loving devotion and heartache, feelings of injustice and the sort of enraged hate that justifies murder in people who otherwise are incapable of violence. And Park doesn't merely jump into acts of vengeance, however, soon after. The narrative lingers at a contemplative pace that allows these victims of circumstance to brood on the agony of loss. Dong-jin slowly sinks into a very dark place where the only recourse for relieving his pain is through its infliction on those who have wronged him. 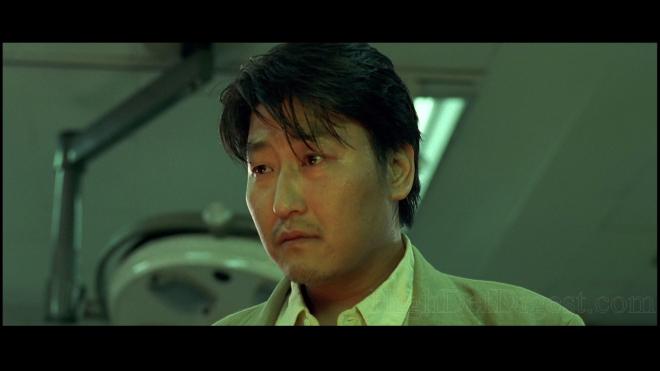 Making the situation and his journey to an unforgivable place where there is no escape is Dong-jin feeling partly responsible for his daughter's death because he didn't involve the police the moment she was kidnapped. The real culprit, however, is a young deaf-mute man named Ryu (an excellent Shin Ha-kyun), whose challenges sadly play a major role in the kid's fatal accident. Like Dong-jin, he is also driven to desperate measures with the help of his best friend and radical anarchist Yeong-mi (Bae Doona) out of love; he goes to extremes in an effort to give his suffering sister (Im Ji-eun) a much-needed kidney transplant operation. Ryu, too, has been wronged by a black market dealer, which is ultimately at the root and cause of this cosmically brutal universe of lex talionis where an average person can suddenly grow into an efficient and capable killer.

Seen as a whole, 'Sympathy for Mr. Vengeance' is a pensively told tale of causality, a series of bad decisions leading to worse consequences which only engenders even more bad decisions. Characters seem to struggle with thoughts of terrible stuff happening from some inescapable cosmic fate, but in reality, it all boils down to choices which are accountable and create a ripple effect where others can be affected and pained. Park Chan-wook's talent is in portraying Dong-jin and Ryu as neither good nor evil but as victims of choices that quickly spiral out of hand when emotions get the better of a person. For audiences, we're left to reflect on the fact that we don't blame either man for pursuing murderous vengeance while at the same time horrified by how they satisfy that impulse with vicious brutality. Of the entire trilogy, the first film remains my favorite.

Palisades Tartan Video brings 'Sympathy for Mr. Vengeance' to Blu-ray on a Region A locked, BD50 disc inside the standard blue keepcase. After a couple skippable trailers, viewers are greeted by a menu screen with the usual options, full-motion clips and music playing in the background.

It is with a heavy heart that I report Park Chan-wook's incredible film arrives on Blu-ray with a rather inferior 1080p/AVC MPEG-4 encode. Despite being promoted as the "Ultimate Revenge Edition," I suspect producers simply retooled the same master used for the DVD release because many of the same artifacts plague this presentation. It's not necessarily terrible or unwatchable, but they're glaring enough to distract and warrant a lower rating than it deserves.

By that I mean the picture is an improvement and comes with several instances of rich, detailed clarity and clean, distinct lines throughout. Colors are animated and full-bodied, adding a touch of irony to a depressing subject matter. But sadly, the high-def transfer is the result of digital manipulation, effectively ruining the striking photography of Kim Byung-il. The sharp 2.35:1 image is made possible by artificial sharpening, creating an annoyingly nasty ringing effect in several daylight sequences, and in some instances, the ringing turns into plainly visible halos. Contrast, for the most part, is well-balanced, but it's been boosted just enough to cause whites to bloom, produce negligible posterization in the sky and reveal a bit of noise in the primaries. Black level are generally strong with good shadow delineation, but they too sometimes fluctuate.

If given a full restoration of the original source with a brand-new high-def master, the film look absolutely stunning, but sadly, it's not meant to be.

Thankfully, the DTS-HD Master Audio soundtrack saves day with a wonderfully impressive and terrifically effective sound design. True to the intentions of the filmmakers, the lossless mix delivers a broad, splendidly immersive soundfield, employing the rears with a variety of subtle ambient effects. Directionality is superb with flawless panning and constant activity to keep viewers engaged. Moments of silence are then all the more potent and compelling because the sudden, abrupt lack of noises filling the room. The front soundstage is broad and expansive with outstanding channel separation and detailed mid-range while dialogue is pristine and intelligible in the center. The only thing holding this great high-rez track from perfection is the noticeable absence of low bass, but otherwise, this is a fantastic listen for fans.

The first in a trilogy about vengeance leading to irrational behavior, 'Sympathy for Mr. Vengeance' is a brutal but poignant portrait of emotional heartache transforming an average person into a viciously cruel killer. Park Chan-wook's film is an extraordinary motion picture of beautiful simplicity and stunning photography in a backdrop of our darkest impulses. The Blu-ray sadly arrives with average if slightly troubled video but an excellent audio presentation. With good supplements to boot, the overall package is for hardened fans while others should give it a rent first.

Sale Price 79.95
Buy Now
3rd Party 79.95
In Stock.
See what people are saying about this story or others
See Comments in Forum
Previous Next
Pre-Orders
Tomorrow's latest releases