'Riff Raff' - The story of Stevie, a construction worker, and his girlfriend, an unemployed pop singer, serves to show the living conditions of the British poor class

'Raining Stones' - This Ken Loach film tells the story of a man devoted to his family and his religion. Proud, though poor, Bob wants his little girl to have a beautiful (and costly) brand-new dress for her First Communion. His stubbornness and determination get him into trouble as he turns to more and more questionable measures, in his desperation to raise the needed money. This tragic flaw leads him to risk all that he loves and values, his beloved family, indeed even his immortal soul and salvation, in blind pursuit of that goal.

Robert Carlyle ('Ravenous,' 'The Full Monty,' 'Trainspotting') stars as homeless Patrick Logan, a very early performance demonstrating his talent for carrying a dramatic lead while barely breaking a sweat. The character, on the other hand, sweats profusely while toiling in a labor-intensive and thankless construction job that scarcely pays a livable wage. Nicknamed "Stevie" by the friends he makes along his journey of poverty and daily struggle for survival, his coworkers at the site help him locate an empty apartment for him to squat in. There's a closeness and camaraderie between the men because they all share similar stories of immigrating to London in search of employment and dreaming of success. Our hero, himself, comes from Glasgow and from a neighborhood made up mostly of public-housing like buildings in terrible states of repair. It's a quiet, sad scene made all the more depressing because "Stevie" visits for a funeral.

Stevie's ordinary and sadly common life is littered with colorfully unique people wanting more than anything to see another day. Larry (Ricky Tomlinson) is a very vocal individual of his political views, continuously talking about his and his coworker's maltreatment while also seeming too shy and timid to actually organize everyone into action. The one time he has the courage to speak up is not a scene about being discharged unfairly as much as it about how employers see the hardworking men as expendable, how bosses subtly keep the labor force in fear and anxiety. To distract Stevie from this sort of daily grind, he falls for aspiring singer Susan (Emer McCourt), who is herself homeless and unemployed. Their relationship is unfortunately damned from the start, in spite of their passion for each other, because the financial stress and burden of making money reveals some unwanted states of dependency.

From British filmmaker Ken Loach ('Kes,' 'Sweet Sixteen,' 'Bread & Roses'), 'Riff-Raff' is not ultimately about homelessness although aspects of that concern are brought up early on. However, like his other works, the film is a social conscience tale on modern life and the challenges faced by society's marginalized. Or to be more precise, it concerns issues of the working conditions endured by the disenfranchised and the exploitation of a voiceless working class. More fascinating is a screenplay written by real-life construction worker Bill Jesse, who based much of what is seen on screen from his personal experiences but sadly passed away before production completed. In his usual stylized "observational cinema" of realism, Loach tells this very engaging story of routine yet dramatic existence not in the typical narrative structure, but like snippets of day-to-day living, tensely building towards a fiery, gratifying and ironic finish. (Movie Rating: 4/5) 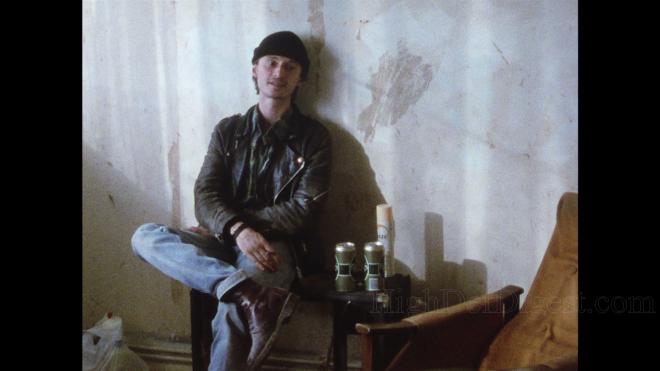 In 'Raining Stones,' Ken Loach takes a slightly different method at poverty and social concerns of unemployment, that from the viewpoint of a caring and devoted father pressured and worried on supporting his family. As melodramatic as that may first appear, the director's stylistic approach for realism removes much of the story's histrionic pitfalls, allowing for the narrative to unfold like a series of unfortunate decisions and a wonderful cast of actors to do the majority of the heavy-lifting. One such scene sees a loan shark and his muscled goon strong-arm a wife into removing her wedding ring and the contents of her purse as a small compensation for the husband's debt. The entire several-minutes-long sequence is all the more powerful, terrifying and heartbreaking because the camera largely feels unobtrusive, distant and from the angle of an observer. We witness helplessly from the corner of the room or as if through an eyehole.

From a screenplay by long-time TV writer Jim Allen, the plot follows out-of-work and always well-intentioned Bob (Bruce Jones) through his daily routine of scheming different ways for making money. We're introduced to him and his best mate Tommy (Ricky Tomlinson) butchering a sheep from someone's farm and selling the meat at a local pub, which only turns a small profit for the two. At the start, the film shows such petty crimes as a necessary evil in the lives of men struggling to keep themselves and their family financial afloat. They don't deliberately mean harm to anyone, and their paltry misdemeanors arise from desperation and need, not greed, malevolence or lack of moral values as is often described of underclass communities. In fact, immediately after the pub scene, Bob tries to earn a legitimate wage cleaning the toilet drains of a well-k kept neighborhood, but only ends up volunteering his services free-charge to his church where he's literally shat on, making it clear he's hit an all-time low in his life.

Adding to his stress and anxiety is his daughter's upcoming First Communion, which for Catholics is an important part of one's youth, highly ceremonious and expensive when celebrated by the most devout. And showing that he is ultimately good with strong moral values, Bob is very much a religious man, dedicated husband and an unselfish father. The dress he wants for his daughter is unfortunately a costly one. He could, as suggested by Father Barry (Tom Hickey), purchase a second-hand gown donated to the church, but that's not an option for Bob's child, to know that her special day was marred by cheapness and her father's failures. It's a matter of pride for men like Bob, the sort that can lead to foolish and often unreasonable decisions, such as borrowing money from the wrong people. But it's also the sort that's extremely sensitive and fragile, as when Tommy is embarrassingly made to borrow from his daughter. 'Raining Stones' is an intensely powerful and poignant drama that's as relevant today as ever. (Movie Rating: 4/5) 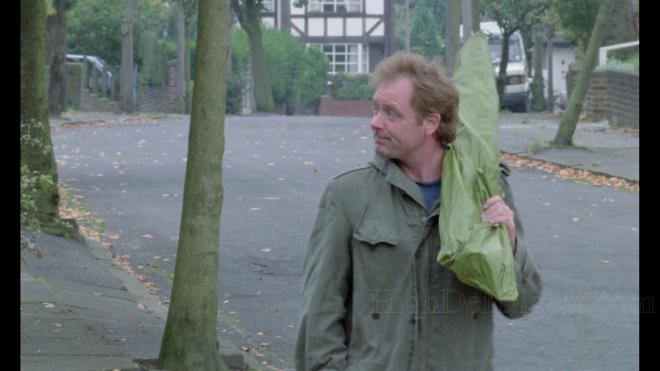 Ken Loach's 'Riff-Raff/Raining Stones' comes to Blu-ray as a Limited Edition release courtesy of Twilight Time. The Region Free, BD50 disc is housed in the standard blue keep case accompanied by an eight-page booklet with a thoughtful essay written by screenwriter Julie Kirgo. At startup, the disc goes straight to a static menu with the usual options.

Originally shot on economical and inexpensive 16mm film stock, Loach's conscientious drama finds a home on Blu-ray with very strong AVC-encoded transfer. Of course, considering the source and artistic intentions, detailing and resolution is rather limited, but lines are nicely defined with excellent clarity and visibility of background information. Contrast is on the average, dull side, but it's consistent and stable with clean, crisp whites. Although shadow delineation is poor, blacks are true and often rich while colors are accurately rendered with bold primaries. Awash with a very thin layer of grain, the 1.37:1 image looks great, all things considered. (Video Rating: 3/5)

Filmed on a grainy Super 16mm film stock, the second drama finds work on Blu-ray with a terrifically strong 1080p/AVC MPEG-4 encode. Like its predecessor, the 1.67:1 photography is the result of stylistic choices and doesn't really lend itself well to high-def expectations. Nevertheless, fine object and textural details are distinct and resolute with excellent facial complexions and natural flesh tones. Several moments are quite impressive and very well-defined, but there is fair amount of soft, blurry scenes throughout. Contrast is on the lower end of the grayscale, but whites are comfortably bright. Blacks are deep and fairly rich while colors are bold and cleanly rendered. (Video Rating: 3/5)

Like the video, the DTS-HD MA mono soundtrack is largely limited by its production; however, it comes with a great sense of presence and clarity, full of warmth and excellent fidelity. Activity in the background is clean and distinct, allowing for the tiniest little noise, footstep and construction work to be heard. There's not much going in terms of dynamic range, but separation between the highs and mids are precise and discrete with strong acoustics. Bass is adequate and provides appreciable depth to the subtle musical score. With very well-prioritized and intelligible vocals, the lossless mix is a satisfying complement to the film. (Audio Rating: 3/5)

The sad and pathetic drama takes out its frustration with a very good DTS-HD Master Audio stereo soundtrack. Imaging is expansive and continuously active with discrete background effects, and the musical score extends the soundfield with a great sense of presence and fidelity. The mid-range is clean and detailed, though it's not extensive or particularly impressive. There is a bit of noise and hissing, but thankfully, it isn't distracting and pretty negligible. Low bass is sadly lackluster, failing to provide much weight to the music or few bits of action. Dialogue is well-prioritized and precise in the center, making this a satisfying lossless mix. (Audio Rating: 3/5)

A pair of socially-conscientious films from Ken Loach arrive on Blu-ray courtesy of Twilight Time. Both features deal with similar themes of poverty and unemployment in the modern world, following two men struggling on a daily basis to remain afloat and trying to survive a normal life. The Blu-ray comes with the best possible audio and video presentations of both films, given their low-budget production history and the condition of the source. Lacking supplements, the limited edition release is nonetheless worth the price for fans of Loach's thoughtful style of dramatic filmmaking.