The Secret Of Santa Vittoria

During WWII in Italy, a wine producing village hides a million bottles from the Germans

With the feel and makeup of being based on real events, Stanley Kramer's 'The Secret of Santa Vittoria' pleases with a boisterous and energetic quality that deliberately undermines the plot's other more deadly serious moments, sometimes to its own detriment, however. Although set in an Italian town at the height of World War II, this fictional tale is intended as a comedy, first and foremost, as indicated at the film's start when townspeople receive the news of Mussolini's downfall and celebrate by literally kicking government leaders out of office. In fact, it's quite the delightful beginning, because it immediately establishes that the majority are not exactly the brightest bunch around, despite being makers one of the finest wines in Europe. One minute, the once-proud supporters of a Fascist government can't grasp the meaning of its collapse while the next, they line up to kick officials in the rear like gleefully excited little children.

Based on the 1966 best-selling novel of the same name by Robert Crichton, the war dramedy wages battle on two fronts; that of the disillusionment of political ideologies and the simpletons often put in charge. And the man hilariously leading that charge is the town drunk but wonderfully charismatic Italo Bombolini (a brilliant Anthony Quinn). The likeable but cowardly dope is voted as mayor in a "Feast of Fools" like moment where he's carted around the main square like royalty for simply coming down the water tower in one of his usual smashed stupors without the aid of a rope or help from the braver and educated Fabio (Giancarlo Giannini). The laughs keep coming when he later desires to model himself after Niccolò Machiavelli's The Prince with little understanding of the text. At home, his wife Rosa (Anna Magnani) wears the pants with an iron fist and can wield a rolling pin like a dangerous weapon when he misbehaves. 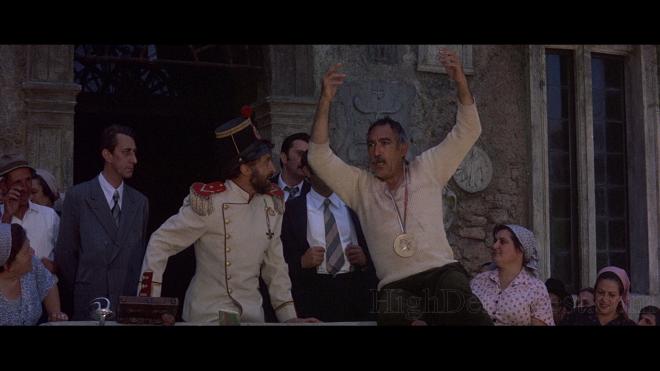 With characters like these, the otherwise quaint and charming Santa Vittoria, which rests at the top of a hill overlooking the stunning green meadows of central Italy, is a heavenly and captivating township. It's a place that once you visit, you might never want to leave because every day surprises with its quirky residents caught in some ridiculous hijinks. Then again, the new spring in their gait comes from the change in government, inspiring many to take more responsibility by cleaning the cobbled-stone streets and the antiquated architecture. Of course, history's biggest party-poopers, the Nazis, crash the festivities with a dastardly plan to steal the people's over one million bottles of wine, the real crux to a script from Ben Maddow and William Rose. With the help of AWOL soldier Tufa (Sergio Franchi), Bombolini organizes everyone in a terrifically edited sequence of hiding their entire stockpile inside nearby caves.

Much of the humor suddenly wanes and nearly abates to the point of being altogether forgotten when the German army marches in and SS officers begin issuing threats if the wine is not uncovered soon. The conversations and interactions with Commander Sepp Von Prum (Hardy Krüger) maintain a lighthearted atmosphere, further allowing Quinn to shine and reveal his funny side. But a tense love triangle between Von Prum, Tufa and the very lovely Virna Lisi as Caterina adds a wedge to the comedic tone and pace, despite being a necessary component to the narrative. Nevertheless, Quinn's Bombolini sustains an upbeat quality, making the award-winning Mexican American actor the film's mainstay delight. With stunningly gorgeous photography by Giuseppe Rotunno ('The Stranger,' 'The Leopard'), Kramer ('Inherit the Wind,' 'Guess Who's Coming to Dinner') delivers a cheerful war dramedy that surpasses its minor weaknesses and entertains with a wildly silly tale of saving the wine.

Stanley Kramer's 'The Secret of Santa Vittoria' comes to Blu-ray as a Limited Edition release courtesy of Twilight Time. The Region Free, BD50 disc is housed inside the standard blue case accompanied by an eight-page booklet with a thoughtful essay written by screenwriter Julie Kirgo. At startup, the disc goes straight to a static menu with the usual options.

The secret is out on Blu-ray with a terrific-looking and often stunning 1080p/AVC MPEG-4 encode, giving the beautiful cinematography of Giuseppe Rotunno a reinvigorated feel. Fine lines in the stone architecture and surrounding foliage are highly detailed, and natural facial complexions are revealing. The 2.35:1 image comes with a very thin layer of grain that's consistent, and black levels are inky and true with deep, penetrating shadows, giving the presentation a lovely cinematic appeal. Contrast is well-balanced with bright, crisp whites while colors are full-bodied and cleanly-rendered.

Of course, the source reveals its age and condition with several poorly-resolved sequences that are terribly soft and mildly noisy with noticeable ringing around objects and overwhelming blacks. Still, the overall high-def transfer in a great shape and sure to satisfy fans.

Like the video, the DTS-HD Master Audio mono soundtrack is fantastic and a wonderful complement to the excellent picture. Although coming through only one speaker, the center channel delivers an outstanding sense of presence full of warmth and fidelity. Background activity is crystal-clear and distinct with a detailed mid-range, creating a broad and welcoming soundstage without the slightest hint of distortion. The music of Ernest Gold displays terrific separation in the orchestration while low bass provides appreciable weight and response when appropriate. With precise, well-prioritized vocals, the lossless mix adds a great deal of joy and entertainment to a lighthearted war dramedy.

With the feel and makeup of being based on real events, Stanley Kramer's 'The Secret of Santa Vittoria' pleases with a boisterous and energetic quality that stars Anthony Quinn, Hardy Krüger, Sergio Franchi and Virna Lisi. The Blu-ray arrives with an excellent audio and video presentation that will surely please fans, but sadly, supplements are terribly lacking, making the overall package mildly disappointing but worth the price.