Overview - A sandstorm of epic proportions. A swarm of locusts so massive it obliterates the relentless sun. Deadly traps that defy imagination. These are just a few of the astonishing obstacles Frank T. Hopkins, the greatest long-distance racer ever, faces in the rousing action-adventure HIDALGO. Based on a true story and starring Viggo Mortensen (THE LORD OF THE RINGS Trilogy), Hopkins (Mortensen) and his mustang Hidalgo enter the ultimate extreme sport of its time -- the Ocean Of Fire. Underdogs challenging the finest Arabian horses and riders, they must not only survive the grueling race across 3,000 miles of the Arabian Desert's punishing terrain, but they must thwart the evil plots of competitors who vow victory at all costs! A great story of personal triumph, amazing special effects, and memorable characters make HIDALGO one of the most thrilling adventures ever.
OVERALL
Recommended

Adventure films are a dying breed. Perhaps modern audiences are too cynical to enjoy the genre's celebration of good-natured folk heroes. Maybe the advent of green screen effects and computer generated extras have lessened the impact and scope of their productions. Or it could just be that younger fans are too distracted by flashy actioners to bond with films focused on the human spirit. Regardless of the reason, it saddens me to see so few films like 'Hidalgo' on the horizon. Harkening back to classics like 'Lawrence of Arabia,' 'Raiders of the Lost Ark,' and 'The Mask of Zorro,' 'Hidalgo' gave me a healthy injection of nostalgia.

Loosely based on the life of Frank T. Hopkins, 'Hidalgo' tells the somewhat-tall-tale of the first American rider invited to participate in the "Ocean of Fire," an annual three thousand mile race across the Arabian Desert. A former cowboy and Pony Express courier, Frank (Viggo Mortensen) has gained a reputation over the years as the greatest horseman in the West and even found work as a rider in Buffalo Bill's Wild West show, but when an Arabian Sheikh named Riyadh (Omar Sharif) challenges Frank's title, Frank packs his trusty steed Hidalgo, travels overseas, and risks his life to enter the Sheikh's legendary endurance race. Attracting the eye of the sheikh's daughter (Zuleikha Robinson) in the process, Frank fights to overcome the elements, his opposition, and his past to prove his own worth.

As you may expect from any adventure flick filled with sword fights and sand storms, 'Hidalgo' takes more than a few liberties with history. Most of the Middle Eastern characters miraculously understand and speak English, the political intrigue is heavy handed and seeped in contemporary foreshadowing, and the main characters have been infused with modern sensibilities that don't quite feel era-authentic. Of course, director Joe Johnston ('The Rocketeer' and 'October Sky') isn't exactly working from a textbook here. Hopkins' danger laden stories have always been a cause for skepticism and disbelief -- after all, historians are unsure if the "Ocean of Fire" race ever existed in the first place. Instead, Johnston works overtime to recapture the joy and thrill of classic adventure flicks from his childhood, developing familiar archetypes and evocative scenes of peril to tap into a forgotten style of filmmaking. Aside from a few sermonizing beats that feel divorced from the 1890's setting (in particular, an Arabian woman's quest for self-empowerment), the director pulls it off, and then some, creating an exhilarating jaunt through a storybook Middle East.

Viggo Mortensen is excellent as always, again proving himself one of the most versatile actors in the biz. He plays Frank as a lonely, tortured soul haunted by a war torn past; hardly the braggart and flagrant storyteller the real Hopkins is assumed to have been. It works in his favor too, as Hopkins emerges as a sympathetic Everyman whose courage and tenacity comes from a darker place than most. The role isn't as engaging as his turn as Aragorn or Nikolai (in 'Eastern Promises'), but he makes the most of every scene and elevates the film beyond its genre conventions. He even makes one-sided conversations with a horse entertaining and believable.

The supporting cast members are equally committed to their roles, offering strong performances across the board, despite the fact that Hopkins is the only character whose arc has any significant weight. Sharif shows that great acting doesn't have to fade with age, Robinson and Said Taghmaoui gracefully steer their characters clear of racial stereotypes, and notable faces like J.K. Simmons sweeten the pot and add a dash of fun to the mix. It's obvious that Johnston took a lot of care in casting 'Hidalgo' to ensure his take on the epic adventure genre wouldn't feel archaic or dated in any way. Yes, his message of racial tolerance doesn't strike me as a concern the real Hopkins would have shared, but Johnston strikes a comfortable balance that allows the film to say something important without becoming historically irrelevant.

All in all, 'Hidalgo' is a great modern adventure film, one that constantly gave me flashbacks to the Saturday mornings of my childhood, a bowl of microwave popcorn in my lap and VHS copies of 'Lawrence of Arabia' and 'Raiders of the Lost Ark' running the gauntlet of my VCR. 'Hidalgo' may not rise to the heights of those cinematic titans, but it comes pretty close. To its credit, a series of engaging performances, exquisite production values, and expansive practical sets were just the tip of the iceberg. I can't guarantee you'll fall in love with this one, but I'm pretty sure everyone but the most ardent cynics will have a good time. 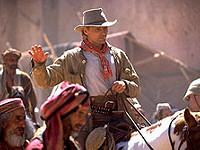 'Hidalgo' debuts in high definition with a much-improved 1080p/AVC-encoded transfer that looks exceedingly impressive next to the standard DVD. The yellows and orange hues of the desert are more vibrant, skintones are more natural, and black levels are deeper and more satisfying. Detail also sees a remarkable boost. Take a moment to marvel at individual grains of sand, the hair on Hidalgo's mane, and the haphazard stitching of Hopkins' costume in the Buffalo Bill Wild West show. Likewise, the sand storm is a frequent source of reference-quality shots -- distant elements in the haze are rendered with crisp edges right up until the chaos consumes them. The transfer isn't plagued by the source noise and halos that creep into the standard DVD picture. While I did catch a few instances of faint artifacting in the sand storm, it never developed into a lingering problem and it certainly wasn't a distraction.

The only issue I have with the video is that 'Hidalgo' doesn't nail the visual perfection of the best high-def adventure flicks on the market. I'm willing to look past the occasional soft shot that pops up from time to time (most likely the result of the source rather than the technical transfer), but there are a half-dozen scenes that appear flatter than the rest of the film. These brief moments may also be attributable to the source, but it doesn't change the fact that the blacks suddenly aren't as inky, contrast seems weakened, and image depth is hampered. While this problem is certainly rare, it's still a sporadic eyesore on an otherwise outstanding effort from Disney. 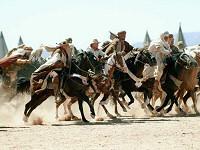 Thankfully, the audio package goes even farther with an involving PCM 5.1 surround track (4.6 Mbps) that allows 'Hidalgo's soundfield to flourish. Dialogue is clean and evenly distributed throughout the central channels, and the neighs and hoof falls of the horses are gratifyingly strengthened by robust LFE support. At times, the beasts sound like thunder, and the uncompressed track helps ratchet up the tension of the race. More importantly, the rear sound design is aggressive and exciting -- wind whips around the soundfield, ambient environmental effects attack from every direction, and subtle acoustics enhance interiors ranging from shoddy wooden theaters to Arabian palaces. Once again, the sand storm is the go-to scene if you're looking for a surefire way to drop your jaw. Exhibiting the best the track has to offer, the whirling storm relies on heavy low-end rumbles, perfectly transparent pans, and close attention to subtle detail.

My sole complaint? Accuracy is a bit spotty when it comes to a few of the dueling rider scenes. Whereas the sand storm and locust swarm use distinct channels to heighten the realism of the event, some of the racing scenes clumsily flood the soundscape with music, effects, dialogue, and environmental ambiance. The problem is that the sound designers drop sound into multiple channels at once. While the artificial surround "oomph" increases the on-screen tension, it undermines the impressive directionality featured elsewhere on the track. Even so, this is a personal pet peeve that probably won't bother anyone other than stringent audiophiles. As is becoming the trend, Disney provides yet another striking audio track that enhances its film and buries the standard DVD alive. 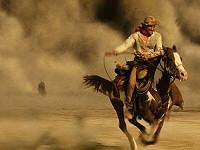 While the Blu-ray edition of 'Hidalgo' preserves the standard DVD's full supplemental package, that isn't saying much. For a film of such sweeping scope, we are offered mere crumbs of details about the production and the horse races themselves. Thankfully, a video featurette that was formerly a DVD-ROM feature is now a fully accessible bonus on the disc itself. 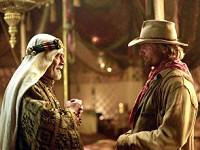 'Hidalgo' is a great adventure film that's been largely overlooked by filmfans across the globe. While it certainly doesn't stick to historical accuracy, this throwback to epic adventure classics doesn't claim to. As a Blu-ray release, Disney continues to prove its commitment to the high-def consumer. 'Hidalgo' may not have an abundance of special features, but it offers an exceptional video transfer and a powerful PCM uncompressed audio experience that will easily please fans of the film. In the end, this release is worth more than casual consideration and should give fans plenty to enjoy when it hits store shelves.

Sale Price 9.69
Buy Now
3rd Party 39.99
In Stock.
See what people are saying about this story or others
See Comments in Forum
Previous Next
Pre-Orders
Tomorrow's latest releases