Three men case a small town very carefully, with plans to rob the bank on the upcoming Saturday, which turns violent and deadly.

From Richard Fleischer, celebrated director of 'Compulsion,' '20,000 Leagues Under the Sea,' 'Conan the Destroyer,' 'Soylent Green,' 'Fantastic Voyage,' 'Tora! Tora! Tora!' and others, 'Violent Saturday' rightfully deserves a spot amongst those more illustrious motion pictures. It's a taut, stylish and terrifically well-made potboiler that takes a great deal of inspiration from noir capers of the decade earlier. Brimming with suspense the moment a trio of handsomely dressed and nicely groomed gentlemen enter the sleepy mining town of Bradenville, Fleischer opens the crime drama with a thick, foreboding atmosphere that doesn't let up until the final closing minutes. And it's that last, well-earned, action-packed quarter which makes this a memorable cult favorite.

From a novel by William L. Heath, Sydney Boehm's script impressively intertwines the personal dramas of the townspeople prior to a major bank heist where their lives unexpectedly clash. Fleischer expertly balances each of the melodramatic subplots as equally important to the main attraction, with each scene and conversation intelligently building up to the explosive conclusion. The exchange and banter between the three aforementioned well-dressed gentleman — the leader Harper (Stephen McNally), the serious nerdy Chapman (J. Carrol Naish) and deadly grumpy Dill (Lee Marvin) — set the stage, carefully planning and clueing us in to their crime, adding another layer of tension. Meanwhile, we're given insight into the lives of these characters and their secrets.

The real genius and beauty of the film ultimately rest on the plot serving as a very subtle commentary on 1950s family culture, exposing what happens behind closed doors within the artifice of happy suburbia. The central household is the happily married, proud family-man Shelley Martin (Victor Mature) and dutiful wife Helen (Dorothy Patrick). Fascinatingly, he's a WWII veteran concerned and a bit insecure about his son not being proud of him and his service, which is an interesting take for the period and serves as a poignant development at story's end. His friend and co-worker Boyd Fairchild (Richard Egan) grapples with a broken marriage and an adulterous wife (Margaret Hayes). The day before the robbery, he toys with the idea of starting an affair with nurse Linda Sherman (Virginia Leith), and this, too, leads to an emotional turn of events at the bank. 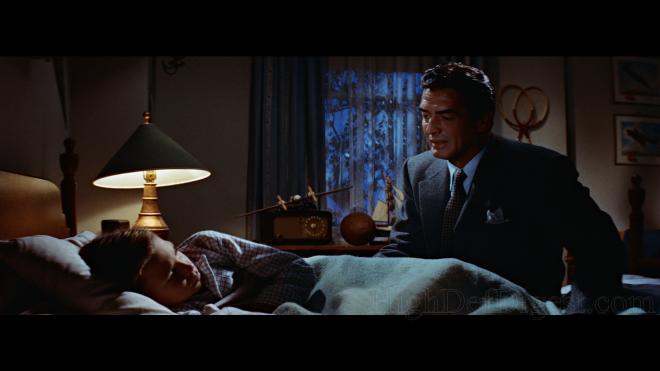 Three more subplots are given equal attention, though not with the same affecting feel as the two above, yet they remain one small piece to the greater whole. Each character has some small stake and is somehow affected by the next day's events. Bank manager and married man Harry Reeves (Tommy Noonan) crushes on nurse Linda from afar, to the point of practically stalking her and turning into a peeping-tom. At the same time, law-abiding librarian Elsie Braden (Sylvia Sidney) turns thief to deal with financial woes, and what she believes to be her lucky break sadly comes with some cosmic irony. Complicating the plot is an Amish family brought into the mess by convenience and captivatingly forcing a pacifist father (Ernest Borgnine) to go against his morals in order to save his family.

As the film's title already makes clear, all these smaller events come to a violent crash on a Saturday, as each character believes their lives looking a bit brighter and hopeful in the coming week. And this last quarter of movie is a tensely riveting action sequence that's shockingly violent for 1955, which surely stunned audiences at the time. Fleischer does a superb job behind the camera with several inspiring moments, particularly the minutes leading up to the robbery and a rather touching reconciliation scene. Cinematographer Charles G. Clarke ('Miracle on 34th Street,' 'Carousel') also impresses with striking photography that takes advantage of the full CinemaScope frame, making 'Violent Saturday' a lush and beautiful crime drama that deserves the same critical attention as Fleischer's other films.

Richard Fleischer's 'Violent Saturday' comes to Blu-ray as a Limited Edition release courtesy of Twilight Time. The Region Free, BD50 disc is housed in the standard blue keepcase accompanied by an eight-page booklet with a thoughtful essay written by screenwriter Julie Kirgo. At startup, the disc goes straight to a static menu with the usual options.

Working with whatever elements were provided to them, Twilight Time brings the noir cult favorite to Blu-ray with an excellent 1080p/AVC MPEG-4 encode. Despite a couple scenes with the yellowish tint that only comes from age, the source appears to be in superb condition with a very fine layer of natural grain throughout, giving the presentation an appreciable cinematic appeal. Definition and clarity are top-notch with sharp detailing in clothing, furniture and buildings. Every letter in the signs is resolute and legible, individual bricks are distinct, and facial complexions are revealing. Black levels are rich and accurate with strong shadow delineation while contrast is spot-on with clean, crisp whites, nicely complementing the deep focus photography of Charles G. Clarke. Colors are full-bodied and bold, providing the 2.55:1 image with outstanding depth and warmth.

Richard Fleischer's crime drama was originally recorded in a 4-track stereo design, and from the sound of it, it would seem as though Twilight has opted to use those original magnet prints for this DTS-HD Master Audio soundtrack. In spite of the 5.1 configuration promised on the back of the box, this is an understandably front-heavy mix with lots of clear, precise background activity. The soundstage feels wide and welcoming with convincing, superbly used off-screen effects and brilliant, well-balanced channel separation. In fact, panning and movements between the three speakers are fluid and flawless while vocals remain crystal-clear and excellently timed with the characters' actions. The mid-range is broad and extensive with exceptional detailing and distinction, while low bass is accurate and decently weighty for a film of this vintage.

From director Richard Fleischer, 'Violent Saturday' is a splendidly taut and intelligently structured crime drama where its success hinges on an action-packed payoff. And in the end, the film is an engaging, brilliant piece that offers more surprises than the central focus about three men robbing a bank. The Blu-ray from Twilight Time arrives with excellent picture quality and an equally enjoyable audio presentation. Although terribly light in the bonus department, the overall package is well-worth the asking price for fans of the film and the genre in general.