In the sequel to Tom Yum Goong, Tony Jaa is the hard-hitting Kham. Kham is the last in long line of guards who once watched over the King of Thailand’s war elephants. Traditionally, only the perfect elephants could successfully help defend the throne, after his harrowing quest to retrieve the elephants, Kham returns to his village to live in peace. But for someone as good in martial arts as him, peace is but a wishful thought.

Prachya Pinkaew's follow-up to his 2005 surprise international hit 'The Protector' ('Tom-Yum-Goong') does precisely what a sequel is expected to do. It tries to surpass its predecessor in every way imaginable by going bigger and louder — more action, more explosions, more fire, and a higher knee to elbow to kick ratio than ever seen on the silver screen. Even within its own universe, the spectacle and high-flying action extravaganza is doubled, sometimes tripled, to such a ridiculous extent that we wonder if there is a deliberateness to the madness and absurdity. If in the first movie we lacked things loudly going boom, Pinkaew rectifies that mistake with one massively insane erupting bang involving a pair of street racers and a tanker in the middle of a conveniently empty intersection.

The scene comes after a whole other outlandishly spectacular sequence that's handled with such fantastically gleeful gusto that it's a hilariously marvelous sight to behold. This is where the film seems proudly contented as a piece of pure popcorn entertainment, right at that verge of bad fun. Completely terrible and unwatchable on the one hand, but full-tilt silly enough to be amused by it, almost as if knowingly done to be as such. Look no further than the aforementioned scene prior to the explosion where Tony Jaa, reprising his role as the emotionally devoted country boy Kham,  is forced to battle a bike gang on rooftops. Let me rephrase that: this is a horde of flamboyant, eyeliner-wearing gang members on moped bikes. And it isn't so much a horde as it is a legion racing through the streets of Thailand.

Granted, Pinkaew, working from a script by Eakisit Thairaat, might be doing all this with some seriousness, but frankly, the sequence reaches such heights of over-the-top lunacy that it attains a level of the comical. If the Jaa versus mopes on rooftops is not goofy enough, then how about some wild helicopter extreme wide shots of an army of them chasing one lone mope on the freeway. In the end, 'The Protector 2' (aka, 'Warrior King 2') is all the better when seen in this way, where the filmmakers embrace the silliness and push it to the extreme. And to make this possible, they simple reuse the same plot as before — greedy evildoers kidnap Kham's elephant and he must save his loved one from the corrupt machinations of the city — with a couple minor twists, like a bomb hidden in tusks. 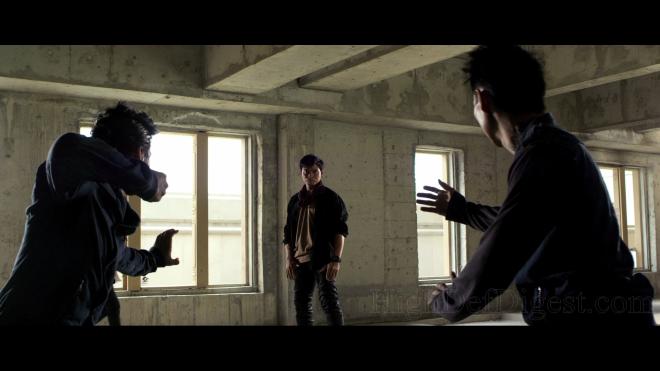 At the start, there is an attempt to make the story appear a bit more complicated with issues of civil war breaking out in the micronation of Catan, but it doesn't take long for the whole thing to quickly unravel into incoherency. Precisely how those concerns relate to Thailand or why specifically Kham's elephant must serve as the sacrificial lamb to a larger conspiracy is never addressed. But to be perfectly fair, are we really going to gripe over such minor, trivial details in a movie created entirely to show off Jaa's spectacular martial-arts skills. What exactly RZA, as an American entrepreneur of underground fighting, is even doing here doesn't matter once he goes into an outrageous maniacal rage that's supposedly the superior to Jaa's talents. Those moments with his eyes bulging out of their sockets and a mouth full of blood are worth the price of admission alone.

Sadly, in spite of all its absurd awesomeness, with Petchtai Wongkamlao returning for comedic effect and Jaa fighting a pair of synchronized badasses in Yanin "Jeeja" Vismitananda and Theerada Kittiseriprasert, 'The Protector 2' fails to completely win this fan over. Most disappointingly is Jaa abandoning his usual wire-work stunts and jaw-dropping acrobatics in favor of more visual optical effects and horribly inexpensive CGI. Green-screen moments are blatantly obvious and several special stunt effects, like the tanker explosion, are laughably bad, taking away a bit of the film's enjoyment. The absurdity also goes a tad too far in one electrified fight scene that uses the sounds of light sabers. This sequel is so spectacularly bad that it's fun, but there are times when it dips into pure stupidity.

Magnet and Magnolia Home Entertainment bring 'The Protector 2' to Blu-ray on a Region A locked, BD25 disc. It's housed inside a blue, eco-cutout case with glossy, embossed slipcover. After a few skippable trailers, viewers are taken to a menu screen with full-motion clips and music.

Much like Tony Jaa's acrobatic fighting style, the sequel arrives with a 1080p/AVC MPEG-4 encode that's disappointingly all over the place. Shot on the Red Epic camera system, the picture is inconsistent and unexpectedly soft for a majority of the runtime. Only a few scenes display razor-sharp detailing in the foliage, buildings facial complexions and clothing. But for the most part, viewers will have to suffer long stretches of poorly resolved sequences and several bits of blurriness.

Much of this can be blamed on shifting contrast levels, which more often than not run too hot, causing a great deal of blooming and clipping, ruining the finer lines. Posterization is a constantly distracting problem, and the badly-done digital optical effects are laughably off-putting. Blacks waver noticeably from murky dull to overwhelming, rarely allowing good visibility of the shadow details and causing the 2.35:1 image to appear boringly flat. Colors on the whole are cleanly rendered with primaries looking fairly bold and bright in a few spots, but the overall palette is also affected by bad contrast, making this high-def transfer a sore disappointment.

The DTS-HD Master Audio soundtrack is an improvement, both over the video and its predecessor, which fought its way to Blu-ray with a legacy Dolby track on the original cut of the film. Here, fans have the choice between two lossless options, Thai and an English dub. Either choice is good for what it is, as they each deliver clean, precise vocals in the center, but they also come with a few minor issues worth noting.

There are clear signs producers have pushed the original sound design beyond its limits, and it's especially noticeable during the many action sequences. The soundstage is fairly wide, but imaging falls somewhat flat and feels oddly stretched and overextended with poor channel separation. On-screen effects lack presence and a fluid sense of movement. Sounds just jump from one speaker to the next. Dynamic range is tightly uniform in the mids with terrible distinction and clarity in the highs, coming off more ear-piercingly bright than clear. It's worse in the surrounds, where activity that's meant to immerse viewers is sometimes louder than the action in the front and much too easy to locate. The low-end also feels exaggerated, more overbearing and inflated in the musical cues than in the action.

Also, the subtitles are not CIH friendly, meaning text is half in the image proper and half is in the black bars.

Full of silly spectacle and over-the-top action, 'The Protector 2' manages to entertain with lots of exciting martial arts, but it's sadly ruined by the horribly bad CGI stunt effects. Nevertheless, the sequel makes for a good follow-up to its predecessor which fans can enjoy. The Blu-ray arrives with poor to average picture quality and slightly better lossless audio. Supplements are small and to the point, sure to tempt Tony Jaa fans into purchasing but making the overall package a rental at best for the curious.

Sale Price 11.14
List Price 16.98
Buy Now
3rd Party 39.99
In Stock.
See what people are saying about this story or others
See Comments in Forum
Previous Next
Pre-Orders
Tomorrow's latest releases