The 1974 film 'Conrack,' starring Jon Voight, has all the trappings of an issue film (which it is), but the manner in which it goes about establishing and disseminating the essence of that issue (or issues, as it were) feels decidedly different from the typical kind of self-congratulatory films that attempt to take a stand, or draw audience's attention to a mounting matter of concern or obvious social ill. The film is sincere without being overly earnest; it is idealistic without being totally naïve. And as marked by today's more cynical standards, the simple tale of a teacher determined to educate a group of underprivileged, mostly illiterate, isolated black children on an island off the coast of South Carolina, this kind of heartfelt film is almost as much a product of a bygone era as the time in which the story takes place.

Voight takes on the role of Pat Conroy, in a story inspired by Conroy's memoirs detailing the demanding, arduous, seemingly insurmountable task of teaching a classroom of 21 students of varying ages the basic fundamentals. But Conroy also takes it upon himself to prepare these youngsters for life in the outside world, the world beyond their strangely remote existence on an island most people are probably unaware even exists. He does this inside a dilapidated structure that is the town's two room school, run by the strict, irascible Mrs. Scott (Madge Sinclair). Suspicious of Conroy's determination and fortitude from the start, Mrs. Scott refuses to make things easy for him, or the students, believing that teaching them the world will treat them unfairly is the only thing of value they will likely take from their time in school. Sinclair is quite the presence in her role, and as much as Voight imbues his scenes with a lighthearted, inspirational tone, Sinclair is the overbearing voice of reality that begins with her testing Conroy's staying power by referring to him only as "Mr. Patroy."

It doesn't take Conroy long to realize just how daunting the task ahead of him actually is. None of his students can perform basic math or read; they are completely unaware of their location, that is, they don't know anything about a place called South Carolina, let alone the United States. Conroy's students even lack the ability to correctly pronounce their teacher's name, settling on the titular "Conrack" instead. Soon, however, Conroy's duties extend much further than the classroom, as he takes an interest in a young, anti-social girl named Mary (Tina Andrews), who refuses to attend class, but is happy to do some cleaning and cooking for him for $1 a week. While later, Conroy is introduced to Mad Billy – played with exhilarating energy by Paul Winfield – an illiterate widower making moonshine, who soon asks Conroy to teach him how to read. 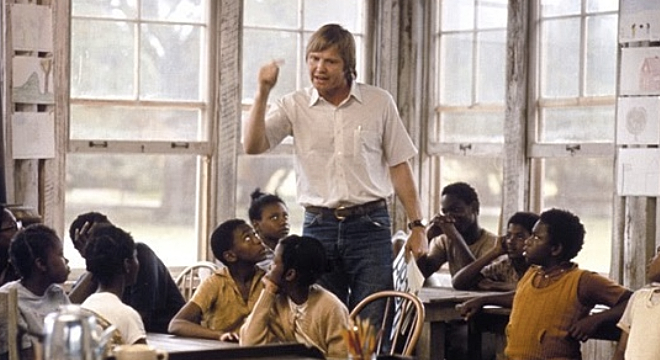 The film chronicles Conroy's methods as much as it does his students' response to him. While he's unorthodox in many respects, it stands to reason that the duty he's been asked to perform can only be accomplished through such methods. And although it seems as though Conroy's been burdened with nothing more than a lost cause, he soon begins to get through to the children, as well as their secluded families that have ostensibly been cut off from (i.e., forgotten by) the outside world. And in his efforts to make a difference by educating his students, it becomes clear that Conroy also intends to find some means of integrating them into a culture and society that would rather disregard them.

In that sense, 'Conrack' becomes less of an issues film, and more of an anti-establishment film, without being a part of the counterculture itsef – even though there is plenty of evidence to suggest that Pat Conroy is. That makes the story incredibly aware of the particular social mores, conventions, and happenings of the time, as it takes great care to establish references to the protracted conflict in Vietna,, and to determine that real change can only occur after those in control have moved or died off. In this instance, the terrific Hume Cronyn steps in as the school superintendent Mr. Skeffington, i.e., the embodiment of outmoded authority. Skeffington is a testy old coot with a penchant for pilfering buttermilk from his employee's refrigerators and a serious dislike for longhaired folk like Pat Conroy, which sees him affably (thereby making it all the more insidious) seek to undercut the progress of these forgotten students.

Movingly directed by Martin Ritt ('Hud,' 'Norma Rae'), lusciously filmed by cinematographer John A. Alonzo ('Chinatown'), and featuring a pre-'Star Wars' score by John Williams (in fact, it actually has hints of William's phenomenal 'Superman: The Movie' score), 'Conrack' boasts an abundance of cinematic talent that goes well beyond a splendid, beaming performance given by Voight. To Ritt's great credit (as well as writers Irving Ravetch and Harriet Frank Jr.) the movie eschews the typical syrupy denouement that normally accompanies tales of selfless educators and those battling social injustice. Instead, the far more grounded climax hints at the heft and endurance of the legacies Pat Conroy is up against, and how, regardless his efforts, real change is a process that moves at a glacial pace. 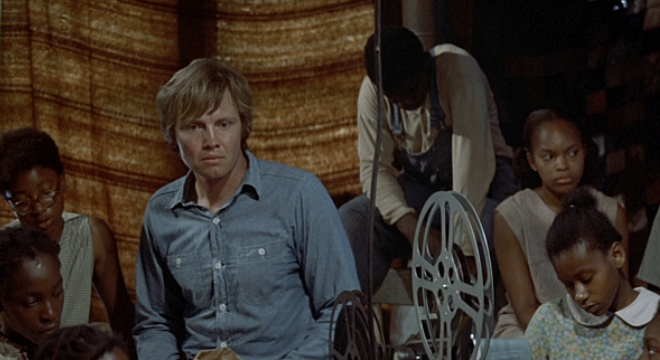 'Conrack' comes from Twilight Time as one of 3,000 editions. It is a single 50GB Blu-ray disc in the standard keepcase, with the usual Twilight Time addition of a booklet featuring an essay by film critic and historian Julie Kirgo.

The 1080p AVC/MPEG-4 encoded transfer offers a vivid, detailed image that both enhances the image – giving it a very nice looking presentation – and accentuates its older, filmic qualities, by highlighting the warmth and grain of film from the time period. The image features plenty of fine detail in close-ups and wider shots, while many of the richer textural elements are on display in closer shots. Color is generally vivid, but the film is working with a narrow palette that is mostly yellows, tans, and other earth tones. Although the image doesn't necessarily offer a wide variety of colors to choose from, it does make the gradual differences in tones noticeable and vibrant. Contrast is high throughout – with the exception of a few scenes where the film is not up to the standards of the rest of the picture – producing good, if not great black levels, and consistent whites that never look blown out. Shadow delineation is strong, while the image is free of banding or signs of crush.

For the most part, 'Conrack' looks very good, and given its age, it is easy to forgive a few moments where the graininess of the image overwhelms the detail and the color. Overall this is a nice looking transfer.

The film has been given a DTS-HD Master Audio 1.0 track that is surprisingly robust and layered throughout. 'Conrack' doesn't have much in the way of atmosphere or ambient noise effects, but that doesn't stop it from producing a sense of place by featuring a simple but pleasant sounding mix that certainly gets the job done. For the most part, the film relies heavily on dialogue, and all of that is presented with great clarity and even tones throughout. Meanwhile, Williams' uplifting score manages to creep through on many occasions, taking the viewer to a place they will likely know through his many higher profile gigs. Sound effects are balanced nicely with the score and the dialogue, though it can sometimes sound as if this element gets the short end of the stick when it comes to perceived importance.

In then end, this isn't a terribly dynamic sounding movie, and it doesn't require a truly dynamic mix. Still, the disc does give above average focus to the dialogue and to the score, making it feel as though the disc sounds better than it has to.

Audio Commentary with Film Historians Paul Seydor and Nick Redman – This is a very learned trip through the historical elements present in the film, as well as many of the American Dream-related thematic parts, which Seydor speaks about at great length.

'Conrack' is the rare kind of film that is sentimental, humanistic, and moving without being mawkish or manipulative; it's a skill that modern Hollywood seems to have lost or otherwise abandoned outright. Voight gives a sterling performance that is backed up by equally great turns from Sinclair, Winfield and Cronyn. Meanwhile, Ritt makes convincing use of the non-actors he used to play his students, mostly by refraining from playing them up as such. This is a gratifying film that can be appreciated as much for the joyful elements it offers, as the cloying elements it so deftly avoids. With great picture and sound, and an interesting, educational commentary, this one come recommended.