'Kid Cannabis' is the true story of an Idaho teen dropout who builds a multimillion-dollar marijuana ring by trafficking drugs through the woods across the Canadian border. But his pursuit of the high life - complete with girls, guns, and vicious rival drug lords - may leave this ex-pizza boy in way over his head.

Based on the real life story of a deadbeat Idaho teen who turned a small pot-dealing operation into a multi-million dollar empire, 'Kid Cannabis' certainly sees the humor in presenting its chubby, attention-deprived protagonist as something of a white, suburban Tony Montana. Sadly, any potential for satire is thrown straight out the window when the story devolves into an absurd celebration of self-determination and a series of gangster movie clichés supposedly played out in real life without a hint of irony or dramatic uncertainty.

Written and directed by John Stockwell ('Blue Crush'), the film takes the majority of its cues from the 2005 Rolling Stone story, 'Kid Cannabis: The Wild Rise and Violent Fall of a Teenage Weed Kingpin' by Mark Binelli, but it also credits 'Dreaming in Green' by Kevin Taylor. For those who have not read it, Binelli's article chronicles Nate Norman's unlikely rise from high school dropout and part-time pizza delivery boy to would-be drug kingpin. And while there is certainly a hint of how this could be another story of wild ambition gone wrong, there is a much more interesting one that is only superficially explored: the one that is essentially the story of a sad, lonely kid who desperately wants approval, love, and admiration of his peers. But unlike its adolescent protagonist who is mostly aware the artificial affections of those around him are a result of his wealth, notoriety, and constant supply of weed, the film too often finds itself tipping away from the self-awareness of its own and it winds up falling into total delusion.

Stockwell seems to have cast Jonathan Daniel Brown ('Project X') in the role of Nate for his supposed physical resemblance to the Idahoan drug dealer. While the image of a teenaged schlub running a drug empire is integral to the film's sense of humor, Brown is unconvincing as anything other than a pitiable visual gag, one that is ostensibly only there to underline the "I can't believe this is really happening" effect of the on-screen goings-on. Ultimately, Brown's depiction of Nate is sorely lacking and merely reads as a shallow imitation of someone he may or may not have once read about. The role requires the kind of range that shows Nate's transformation from average slacker teen who likes pot and is fed up with his position in life, to that of a pretender trying on the role of gangster, and playing it out in the manner he thinks one is supposed to. Having an actor play someone who himself is acting (and failing at it) is difficult for even the most accomplished thespian. For his part, Brown is simply not up to the task. As such, the character of Nate lacks the kind of layered nuance that would have made him a compelling and potentially empathetic character. 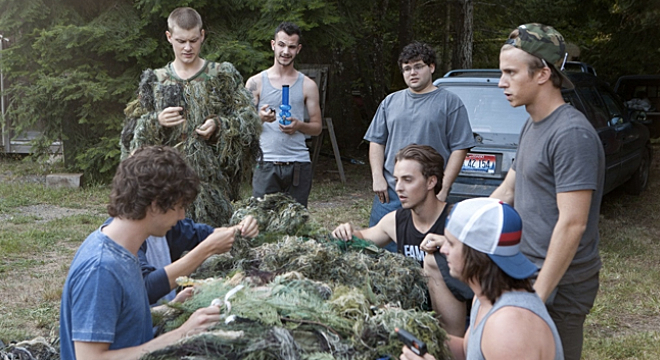 Instead, Norman is little more than a collection of pot-smoking cliches and unappealing contrivances. When he talks it's not as though he's the smartest kid in the room, but rather like someone who arrogantly thinks he's the smartest kid in the room. Norman treasures his outsider status like he's seen one too many John Hughes films, and yet all he wants is to be part of the cool crowd. All of this could be persuasive and entertaining – even Nate's utter bungling of it all – if the film gave any indication this was its actual goal.

To compensate, Stockwell simply abandons subtext and subtlety at every turn, focusing instead on telling the story through an overwrought, humorless voiceover that asks Brown to recite insipid lines like "Every chunk of coal wants to be a diamond" with a straight face, before comparing his drug runners to "Kenyan track stars on meth." Now, there are few things more irritating than listening to anyone rhapsodize about pot-smoking clichés and pot statistics, comparing it to alcohol or hard narcotics. And at its heart, 'Kid Cannabis' is 110 minutes of just that.

What's worse is those expository details are all Stockwell endeavors to use in order to persuade the audience that what they are watching is actually gripping drama. He relies so heavily on the notion of 'Kid Cannabis' being a true account that he doesn't bother to create an actual character out of his lead, much less Norman's band of merry pot smugglers. That means terrific character actors like Ron Perlman and John C. McGinley are also wasted as an Israeli drug smuggler/cell phone storeowner and a Canadian pot farmer, respectively.

The film briefly attempts to establish a rivalry between Nate and his buddy Topher (Kenny Wormald, 'Footloose'), as tensions rise regarding who is actually in charge of the business. At the same time, Nate and his crew are facing violent struggle from Brendan Butler (Aaron Woo), another local teenaged drug dealer who is so strung out on coke and oxy that he hires two hitmen to rub out the competition. But neither Topher nor Brendan wind up being anything more than minor plot points in this paint by numbers script.

In the end, 'Kid Cannabis' is too flippant with certain details of this real life story, and slavishly devoted to others. There is probably an interesting, poignant film to be made of Nate Norman's misadventures in the world of drug smuggling, but this certainly isn't it. 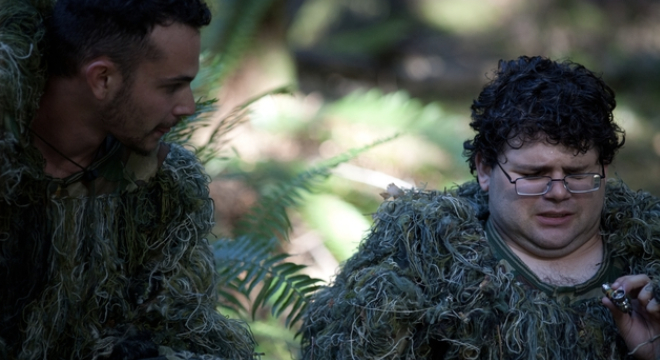 'Kid Cannabis' comes from Well Go USA Entertainment as a single 25GB disc in the standard keepcase. Although there are a handful of previews ahead of the film that can all be skipped, there are no other special features included on this disc.

Unsurprisingly, the 1080p AVC/MPEG-4 encoded transfer is very nice looking, as a clear, crisp, detailed image. Also unsurprising is that the image is so clear, it has a tendency to look somewhat sterile on occasion. Still, the detail manages to be consistent, offering nice looking facial features, textures, and backgrounds. Contrast is high for the most part, offering deep, inky blacks that produce a firm edge and do not detract from the detail at any point. Whites are bright without appearing too hot or blown out. Colors are also very nice looking: vibrant, but not oversaturated.

As mentioned above, the cleanliness of the picture is undercut by lack of emotion it conveys. Everything looks sharp and detailed, but there's little in they way of artistry or emotion in how it's presented. That likely has something to do with the budget of the film and although it doesn't take away from the technical proficiency of the disc's image, it does alter how the audience is likely going to feel about the film they just watched.

Like the image, the sound is technically very nice, but there is a certain liveliness to it that the image is simply lacking. The DTS-HD Master Audio 5.1 mix offers great sounding dialogue throughout that utilizes several channels at once in order to create an immersive listening experience. Sound effects and music are balanced nicely with the actor's dialogue, dropping and rising when the time calls for it, while imaging takes care of the few action oriented sequences that give the film a much needed spark of life.

The rear channels pick up a great deal of atmosphere, especially during the boisterous party sequences, but they also do a nice job of creating a true sense of place when the teenaged drug smugglers are trekking through the woods on their way to Canada. The mix exhibits a great deal of range in these smaller instances that generates more believability than the image does in most cases.

All in all, this is a very nice sounding disc that delivers some surprising elements from time to time.

'Kid Cannabis' does not contain any special features.

Fictionalizing true events can be tricky, as one has to be beholden to the account, while also knowing how and when to fictionalize certain elements so that they remain true, but are dramatically compelling as well. From start to finish, 'Kid Cannabis' not only fails to make its dramatic moments stick, but does very little with the real life bits as well. Despite having very good video and audio, this movie is nothing short of a let down. Skip it.

Sale Price 19.89
List Price 29.98
Buy Now
3rd Party 19.89
In Stock.
See what people are saying about this story or others
See Comments in Forum
Previous Next
Pre-Orders
Tomorrow's latest releases