A weary ex-vampire hunter moves into a run-down housing estate, and contends with a ghoulish collection of bloodsuckers, ghosts, and zombies in this stylist tribute to the popular "Geung Si" horror films of the 1970's, '80s, and '90s. Once upon a time, Chin Siu-ho (Siu-ho) was a famous actor who slew vampires on the side. These days Chin's bank account is empty, and his family won't talk to him. Deeply despondent, he checks into room 2442 of a dilapidated tower block with the full intention of taking his own life. Chin's suicidal ambitions are quickly thwarted, however, when he crosses paths with his eccentric new neighbors, which include a powerful Taoist exorcist (Anthony Chan), a deeply-troubled housewife (Kara Hui) and an old lady (Paw Hee-ching) with a morbid flair for interior design. It doesn't take Chin long to realize that something terrible is unfolding before his frightened eyes, and as the dead begin to rise, the battle against the forces of darkness begins.

Already finding success as a pop-singer with minor supporting roles and as the writer for the amusing 'Revenge: A Love Story,' Juno Mak makes his directorial debut in 'Rigor Mortis.' Enthusiastically stylish with continuously stunning imagery that's genuinely creepy, the Honk Kong feature is an array of visual horror delights which demonstrate both Mak's talent and skill behind the camera along with a passion for inventiveness. Granted, he unabashedly borrows from other films and Asian folklore about the paranormal, largely feeling familiar in many respects. But there's also a sincere eagerness to portray that familiarity in uncommon ways and within a strange, uncanny landscape, thanks mostly to the cinematography of Man-Ching Ng ('Infernal Affairs 2,' 'Legend of the Fist').

Where Mak is most blatantly borrowing from other sources is the fact that the plot, which he co-wrote with Jill Leung and Philip Yung, is essentially homage to the jiangshi films of the 1980s. It's a particular type of Chinese vampire movie that fascinatingly mixes traditional folklore with western mythology and often features comedic undertones, along with some spectacular martial-arts action. These movies are most notable for their undead having ghostly characteristics but behaving more like the walking dead, sometimes even looking like rotting corpses in fancy attire. Although lacking the silly slapstick humor of those movies, Mak and his team clearly want to return to such cult favorites like 'Mr. Vampire,' 'Vampire vs. Vampire' and 'Encounters of the Spooky Kind.'

Funnily, many in the cast also appeared in Sammo Hung's hilarious 1985 comedy horror or at some later point within the series. Interestingly, Chin Siu-ho ('The Tai-Chi Master,' 'Fist of Legend') stars as himself — not necessarily portraying his real-life self, but some fictional version of himself. In a subtly quirky wink-wink reference, he plays a washed-out actor who's lost it all, including his son and wife. And this is the most we get in terms of character development, which sadly is one of the script's drawbacks. The film opens with him moving into a dreary and bland apartment complex, sulking about his former life and fame, and randomly meeting the only child in the building, an albino kid with a traumatic past of his own. The lovely Kara Hui ('My Young Auntie,' 'Legend of the Drunken Tiger') plays his troubled, homeless mother, whose disturbing backstory eventually serves an integral part to Siu-ho's salvation. 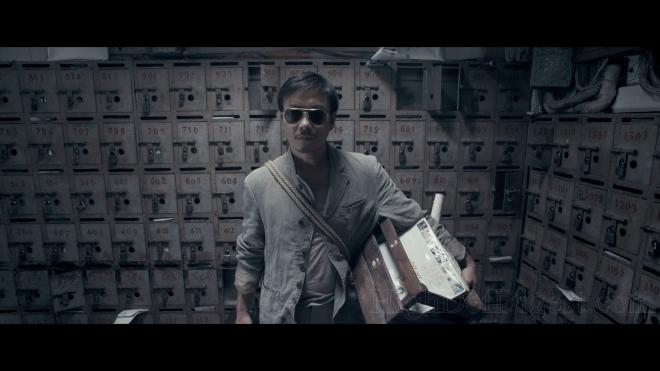 What the character needs saving from is curiously himself. When arriving at his new digs, a dismally gray and bleakly plain apartment that's literally a box, the first thing Siu-ho tries to do is hang himself from a ceiling fan. Being a spiritless man desiring death, he inadvertently awakens the vengeful spirits of the former occupants desiring life. Anthony Chan and Chung Fat, both of whom have played Taoist priests in the 'Mr. Vampire' series, must come to Siu-ho's rescue, again playing priests with the talent for fighting angry ghosts and vampires. While Chan wants only to make peace with lost souls, comically philosophizing that he might as well start making friends now, Fat is paid for spiritual advice and favors by the residents. His toying with the black arts is what creates the vampire, through a complex ritual that looks a lot like bringing the dead to life.

Admittedly, 'Rigor Mortis' does start to wear a bit thin halfway into the story, as if unable to sustain the creepy atmosphere and very light drama it so elegantly established early on. The paranormal aspect involving the violent deaths of two teenage sisters is somewhat clumsily merged with the jiangshi storyline, as if battling for the main spot. But in the end, it's brought to a satisfying and highly mysterious, if not outright confusing, conclusion. Juno Mak directs with spastic, flurried excitement, creating some beautifully executed visuals which can feel invigoratingly fresh and twisted. Although the script can benefit from minor tweaks, the Hong Kong horror flick is visually exciting, making it a fun watch for genre hounds.

Well Go USA brings 'Rigor Mortis' to Blu-ray on a Region Free, BD50 disc inside a blue, eco-elite case with a shiny, lightly-embossed slipcover. After several skippable trailers, viewers go to a static menu with standard options along the bottom and music.

'Rigor Mortis' scares the bejesus out of Blu-ray with a first-rate, if only slightly troubled 1080p/AVC MPEG-4 encode that's true to the intentions of the filmmakers. The photography is deliberately subdued and obviously favoring the teal-orange palette, but colors are cleanly rendered with primaries noticeably looking brighter and fuller than others. Contrast has also been considerably toned down, giving the picture an almost black-and-white feel that eerily complements the story. Although brightness levels are generally well-balanced with strong shadow delineation, the very darkest portions of the frame suffer from visible crush, and minor banding is a constant distraction throughout. Nevertheless, the 2.35:1 image is richly detailed with distinct, fine lines in various objects of the homes and excellent lifelike textures in facial complexions.

The Hong Kong horror film terrorizes and strikes fear into the hearts of listeners with a fantastic and continuously active DTS-HD Master Audio soundtrack. Making excellent use of the surrounds, the design employs a variety of discrete effects to generate a frighteningly immersive soundfield. From squawking birds in their cages to the contorting, snapping bodies of ghosts, the room is endlessly filled with a spooky atmosphere. The front soundstage feels broad and welcoming with a clean, detailed dynamic range; however, the higher frequencies occasionally come off a tad too bright. Low bass is quite potent and surprisingly powerful, reaching some ultra-low depths in a couple spots, yet it also feels exaggerated in several other areas. Nevertheless, dialogue reproduction is well-prioritized and intelligible, making this an excellent and scary lossless mix.

As a side note, the subtitles are not CIH friendly.

Enthusiastically stylish with continuously stunning imagery that's genuinely creepy, 'Rigor Mortis' is an array of visual horror delights. Unabashedly borrowing from other films and Asian folklore about the paranormal, director Juno Mak essentially makes a fun and entertaining homage to the jiangshi films of the 1980s. The Blu-ray arrives with strong video but a superior audio presentation. Disappointingly lacking supplements, the overall package should please genre fans and the curious.

Sale Price 24.64
Buy Now
3rd Party 7.81
In Stock.
See what people are saying about this story or others
See Comments in Forum
Previous Next
Pre-Orders
Tomorrow's latest releases