In this elegantly unsettling murder mystery, Stellan Skarsgård plays an engimatic Swedish detective with a checkered past who arrives in a small town in northern Norway to investigate the death of a teenage girl. As he digs deeper into the heinous killing, his own demons and the tyrannical midnight sun begin to take a toll. Erik Skjoldbjærg’s chilling procedural anticipated the international hunger for Scandinavian noirs and serial killer fictions, and features one of Skarsgård’s greatest performances.

Early on in Erik Skjoldbjærg's neo noir (or perhaps even anti-noir) 'Insomnia' the film's antihero protagonist (are you beginning to see a trend?) Jonas Engström (Stellan Skarsgård) and his partner Erik Vik (Sverre Anker Ousdal) arrive in Norway to investigate the murder of a 15-year-old schoolgirl. As the pair travel to their destination, the audience looks in on them, peering into the car, riding along, and listening in as their conversation paints a potentially scandalous picture of Engström, which explains why a Swedish detective would be working a case in Norway. Then, for a brief moment, the camera hangs back, as Engström and Vik drive into a tunnel, penetrating the only darkness available in this land of the midnight sun.

Since the film's 1997 release, Skjoldbjærg has said many times that he and his co-writer Nikolaj Frobenius wanted to invert the concept of film noir by eliminating darkness altogether. And what better place to do that than in Skjoldbjærg's native land, some 200 miles north of the Arctic Circle? In that sense, 'Insomnia' is a film that has many of the same structural trappings as a conventional noir or detective film, but its unique location and, more importantly, the effect that location has on the characters and the way the story is told delivers something altogether different. 'Insomnia' isn't so much a murder mystery or even a detective story, as it is an examination of guilt, conscience, and the elaborate fictions that are often designed and erected in order to assuage both.

Skjoldbjærg utilizes ambiguity to great ends in unfolding the narrative that begins with the hunt for a child murderer and soon turns into something else. Although the exact details are scant, there is a sense early on that Skarsgård's scandalized detective is on the run from something, or has been cast out from a place he once belonged. As such, the sudden lack of darkness he encounters – which casts the city in which the film takes place in a stark white light – is ostensibly his worst nightmare, or it would be if only he could fall asleep. But rather than focus on Engström's background or search for answers to what he may or may not have done, the film's conceit turns almost entirely on the moment when the detective murders Vik in a tragic instance of friendly fire (which shouldn't have even been a possibility since cops in Norway aren't allowed to carry guns). 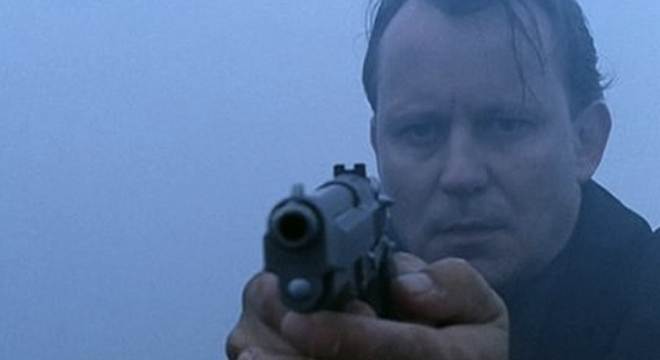 Again, Vik's death, and Engström's subsequent decision to frame the initial murder suspect for that death, could have resulted in a conventional narrative about a morally corrupt cop, but Skjoldbjærg manages to utilize the film's themes of ambiguity and restlessness to accentuate the instability of character's relationship to himself as well as his environment. In a new conversation that Skjoldbjærg has with Skarsgård included on the disc, the director mentions his deliberate focus on Engström's loss of orientation, and his inability to settle into the rhythm of the place he finds himself. It is a "counter rhythm," as Skjoldbjærg explains, one that he demonstrates visually a number of times in the film. In one instance, Skarsgård appears to be chasing himself in a dense fog, while later in the film, Engström, having fallen through a dilapidated deck, appears to lock his gaze on something in front of him; the camera swivels and Engström walks into the shot – his head just outside of the frame – causing viewers to question just what perspective is accurate.

That clever use of camera technique and editing blend with the underlying premise in such a way the film has an experimental quality to it. But even for a first time filmmaker, Skjoldbjærg understands that the radiant white light seeping through every window and poking the protagonist's troubled brain isn't just a peculiarity for someone unaccustomed to a place where nighttime is never truly dark; it is a metaphor for the inescapable gaze of one's own conscience. Engström is essentially trapped in a place without shadow, where there is nowhere – literally or figuratively – for him to hide. That pervasive fear of his secrets being revealed, and his conscience being exposed creates an agitation that is taken to hallucinatory extremes by the character's inability to sleep.

And while Engström's efforts to seal his hotel room from the invading light provide the film with some much needed moments of levity, they would be nothing without Skarsgård's brilliantly reserved performance, which has a nuanced way of making the character's actions seem incredibly inappropriate and purposeful at the same time. As a character, Engström is the kind of antihero that many will equate with Tony Soprano, or Walter White. In fact, as the narrative expands to include Jon Holt (Bjorn Fløberg), the suspect in the young girl's killing, a resemblance between the two men quickly emerges. It's no coincidence that Holt is a crime novelist, as 'Insomnia' increasingly concerns itself with the idea of creating an acceptable fiction that can be sold and consumed by others. In this case, the intended audience is, of course, Engström himself, but it is also Norwegian Detective Tanja Lorentzen (Maria Maheiesen), who isn't buying her temporary colleague's tale any more than he is.

The denouement suggests that both will have to find a way to live with the dubious story they've just experienced. There is no sense Engström will be emancipated from his mental anguish, but his placid demeanor makes it ambiguous as to how he feels about it. Sleep is the character's goal, and sleeplessness is his new stasis point. Such an anti-resolution is in keeping with the film's subversion of genre conventions, but unlike the memories keeping Engström's eyes from closing, 'Insomnia' finds itself welcomely etched in the viewer's mind. 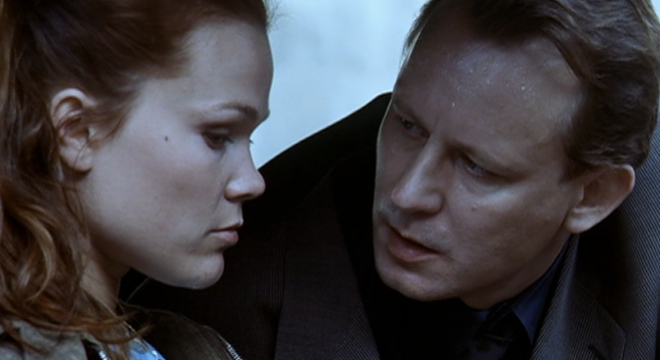 'Insomnia' comes from Criterion as a dual format edition containing both a 50GB Blu-ray disc and a DVD. While the spine retains its original numbering of 47, this edition boats new cover art that plays up the film's use of blinding white light and the indistinctness it creates. The release also includes a booklet with a terrific essay by Jonathan Romney, as well as details on the remastering of the film.

This Blu-ray edition has been given a 4K restoration that looks quite stunning. Using the original 35 mm camera negative, the transfer has been able to deliver what may be the best looking release of the film period. The movie opens with an 8 mm montage of the young victim being murdered. The shift from that grainy image to the astoundingly clear and pristine picture would be jarring if it weren't so nice to look at. Fine detail is present everywhere, but it presents itself in facial features and fine textures most resolutely. Skin tones are consistent and lifelike throughout, while the film's backgrounds are constantly irradiated by a white light that looks terrific here.

The transfer also handles the whiteness of its palette by bringing in strong colors like green and blue, without making them look filtered or out of place. Reds are also vibrant and manage to pop without appearing over saturated. More importantly, however, is the way the transfer handles contrast. Unsurprisingly, it looks great. Blacks, though rare, mostly inky and full bodied. The brief shot in an underground tunnel is one of the best looking in the film. Still, there are a few moments toward the end where the image darkens and becomes inexplicably grainy. While the shot still looks nice, it is incongruous with the rest of what is a great looking transfer.

The DTS-HD Master Audio 2.0 mix delivers rich sound that is in keeping with the film's toned rather down audio presence. 'Insomnia' doesn't rely on a big bombastic score, or sound effects, nor does it feature an atmosphere that needs to be augmented by sound. Instead, the sound focuses primarily on dialogue and the open spaces that exist between moments when people are talking to one another. In that sense, both come through clear and distinct, with nice, subtle changes as the film moves in and out of scenes requiring differing levels of expressiveness.

For the most part, the audio works in perfect harmony with the image and action on-screen. Sound effects register cleanly, while the score adds a rigid sterility to the proceedings. There is some extension around the channels, as certain elements come into play, and the mix balances them nicely against one another without letting one overwhelm the other. While it isn't necessarily a terribly dynamic mix, it is the kind of solid, unadorned presentation that works perfectly with the film's tone.

Although Skjoldbjærg's output hasn't been as impressive as his debut feature suggested, 'Insomnia' will always be a film worth revisiting over and over again. Its American remake by Christopher Nolan was visually impressive, but narratively inferior to the original, as Skjoldbjærg's insistence on focusing on ambiguity and a lack of resolution created a far more significant and memorable experience. Criterion scores another winner with a gorgeous transfer and very good sound. The extras may be a little slight, but the conversation between Skjoldbjærg and Skarsgård is worth it for the latter's bluntness regarding his opinion of the screenplay when he first read it. This release comes highly recommended.

Sale Price 38.98
Buy Now
3rd Party 14.47
In Stock.
See what people are saying about this story or others
See Comments in Forum
Previous Next
Pre-Orders
Tomorrow's latest releases