On the surface, director David Evans' 1997 adaptation of Nick Hornby's autobiographical book 'Fever Pitch' is the tale of Paul Ashworth (Colin Firth), a grown man obsessed with football (or soccer, if you prefer), and more specifically, the Arsenal football club, in a way that has left him somewhat emotionally stunted and limited not only in his worldview, but also in his prospects – both socially and professionally. Paul's obsession with the club, his incredible need to see them win a championship is presented as the driving force behind the vast majority of his being for the last 18 years, and the longer that need goes unmet, the more Paul's life seemingly goes unattended.

Paul has boiled himself down to one element, and in that element, he is simply a spectator – a passionate one, but a spectator nonetheless. There is a blissful, willful ignorance to the world outside of football that sees him literally shut everything else out, to the extent he cannot even carry on a conversation if there's a match on the television or the radio. So it is here, then, in the one-dimensional passivity of the protagonist that 'Fever Pitch' – a film that is most certainly a romantic comedy in the British tradition – finds its central conflict. The character is not merely looking for love and battling the external forces that would otherwise keep him from finding it; he is in a struggle against his own base nature: one seeking to simplify the world down to the singular, an aspect that inherently goes against the notion of coupling – or the expected end result of most romantic narratives.

And while it fulfills the needs of a romantic comedy, there is something desperately lonely about the film, a melancholy that comes from seeing someone live in a rut for so long it has come to define him. For Paul, placing nearly all of his emotions into one pursuit (i.e., the fortunes of a football club) is the most stable kind of relationship there is. After all, no matter how many players, coaches, and club staff come and go in nearly two decades, the club persists; Arsenal lives on. As a club its only objectives are to entertain and to increase its fanbase from season to season by winning championships – or at least perpetuating the dream that it might one day. It is a simple relationship that is just waiting to be blown up by the (late) arrival of someone who can divert his passion, namely, Sarah Hughes (Ruth Gemmell), the newest teacher at the school Paul works for. 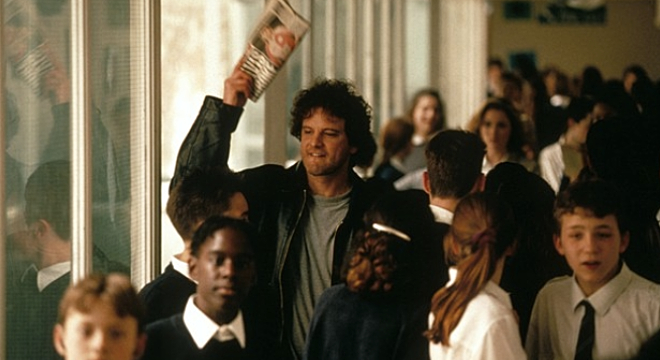 For a supposedly simple genre film, there is an awful lot of psychology to unpack, which, unsurprisingly, requires a bit of backstory. In adapting his own work, Hornby gives the audience just enough understanding of what first brought Arsenal to Paul, and why it was that he began to choose a football club over more meaningful pursuits and relationships. Here, Hornby and Evans manage to utilize flashbacks to service the story at hand. One weekend, his father (Neil Pearson) takes young Paul (Luke Aikman) to his first football match and an obsession is born. The filmmaker frames the scene in such a way there is no one revelatory moment for the child; it is an experience that defies categorization by virtue of being many things at once. The takeaway for the audience, then, is the intuitive understanding Paul sees the potential of belonging to something that brings him joy with little effort on his behalf and, more importantly, is unlikely to fall apart like his parents' marriage.

Hornby's script convincingly establishes how this devotion to such a simple entity was a reaction to familial circumstance without constantly parading it about the narrative. Instead, he uses the flashbacks as a way to draw Paul as a more rounded, understandable character, while establishing his introduction to the sport and, later, the enabling that occurred through the intentionally flat characters of Paul's father, mother, and sister. In that sense, the story follows the familiar pattern of addiction, wherein the user experiences the exhilarating highs and debilitating lows granted by most narcotics throughout a season of football.

So, when Sarah Hughes enters Paul's life and becomes something more than just an uptight co-worker, the effect is a little like watching a character go through the stages of recovery. Hornby draws Sarah so completely that she is not simply an obstacle between Paul and his obsession, nor is she some liberator, destined to pull Paul from the depths of his addiction. This avoidance of a romantic comedy trope allows both characters to be more fully realized, and for both of them have a more inclusive arc. The characters don't exist to fulfill one another's storylines; they simply augment them. Sarah is mercifully not seen as the protagonist's primary goal; just as resolving Paul's obsession isn't necessarily the objective of the narrative. Instead, both work to color a story about obsession in a clever, resoundingly genuine way.

The film's greatest asset, then, is the manner in which Evans and his actors convey passion bordering on fanaticism without making it tedious, or the infatuated characters feel wearisome. Firth is his usual affable self, even when Paul is sulking about, despondent over a late-season loss. Meanwhile, Gemmell maintains a consistent sharpness that adroitly highlights the conflicting emotions of her relationship with this peculiar man-child. In the end, Hornby's script, Evans' superb directing, and the brilliant cast come to together to make a funny and engaging film about living with obsession, and learning to live without it. 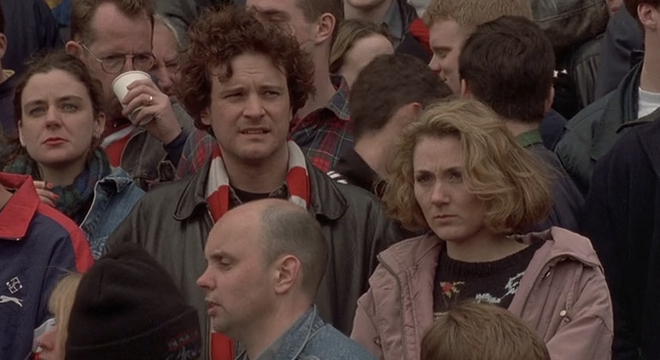 'Fever Pitch' comes from Twilight Time as a single 50GB Blu-ray disc limited to 3,000 copies. The disc comes in the standard keepcase, and is free of previews before the top menu. As with all Twilight Time releases, there is a small booklet featuring an essay by film historian and critic Julie Kirgo.

'Fever Pitch' is not an especially old film, so it stands to reason there wasn't a tremendous amount of work to be done transferring it to Blu-ray. Still, the 1080p AVC/MPEG-4 encoded transfer is likely the best the film has looked since it was in theaters. Every frame is incredibly clear, and filled with fine detail in facial features, clothing textures, and background elements. The image is consistently bright and colorful, accentuating the details of North London, while also playing up the vivid greens of the football fields, as well as the various teams' uniforms. That consistency also extends to the vibrancy of the image, which is produces accurate skin tones, while also looking cinematic.

Adding to that effect is a thin layer of grain throughout the film that heightens the image's filmic sensibilities, and gives the viewer a better sense of time and setting. Contrast is also high, producing full-bodied blacks and crisp edges, while keeping the sometimes drab, gray skies of London from looking washed out or bland. There are a few instances where white specs and other elements pop up on the screen, but they are very small, and do not detract too terribly from what is otherwise a fantastic looking transfer.

The DTS-HD Master Audio 2.0 mix is surprisingly robust and dynamic, affording some nice flourishes that highlight the frenzy of a live football match, while also playing up the dialogue by ensuring each actor's voice is crisp and clear. There is also a tremendous sense of balance, as the mix almost imperceptibly raises and lowers the sound effects and music when dialogue takes center stage, but it also keeps those competing elements high when the moment calls for it. The mix does exceptionally well at conveying raucous moments throughout the film, and especially during its climax. The layers of sound are surprisingly rich, as everything comes out sounding quite distinct and pleasurable.

The roundedness of the mix makes for a charming listening experience that delivers more than the standard romantic comedy soundtrack might call for.

Most will likely be more familiar with the 2005 American remake by the Farrelly Brothers, which starred a pre-Tonight Show Jimmy Fallon and Drew Barrymore. Preferences in tone, or in terms of the sports that define each version may have kept some from picking this earlier adaptation up, which makes this the perfect time to correct that. This benefits greatly from having Hornby himself behind the screenplay; the characters crackle with the author's brand of witty, charming dialogue and Evans' direction gives the film the subtlety and nuance it needs to be both funny and heartwarming, while also delivering the humanity behind the narrative. Firth is terrific and is surrounded by some equally strong supporting actors like Gemmell and the inimitable Mark Strong. In addition to a fun, charming film, this edition features a wonderfully detailed transfer, great sound, and a fascinating commentary by two well-spoken film historian. This is definitely recommended.