New York, 1974. Fifty year-old Chris has just been released on good behavior after several years in prison following a gangland murder. Waiting for him reluctantly outside the prison gates is his younger brother, Frank, a cop with a bright future. Chris and Frank have always been different, and their father, Leon, who'd raised them alone, seems strangely to prefer Chris - this, despite all his troubles. Yet blood ties are the ones that bind. Frank, hoping that his brother has changed, is willing to give him a chance; he shares his home, finds him a job, and helps him reconnect with his children and his ex-wife, Monica. But Chris' past quickly catches up to him, and his descent back into a life of crime becomes inevitable. Based on a script by James Gray.

When a film is a remake of an adaptation, there have to be concerns about the dilution of a narrative's essence. And when that remake is suddenly transitioned from a French crime story about a family at odds, to a tale set in 1970s New York, as 'Blood Ties' is, then the concern becomes two-fold. And while it is a stylish, well-made, and well-acted film that features the likes of Clive Owen, Marion Cotillard, Billy Crudup, Mila Kunis, Zoe Saldana, and James Caan, it is difficult not to simply ask why this remake was deemed necessary in the first place.

And that question is rather unfortunate, as 'Blood Ties' certainly has all the prerequisites of a prestige drama. It is a period piece starring recognizable actors in presumably meaty roles that allow them to put on various affectations, hairstyles, and costumes that will present them in a new light to most audiences. It also has a strong story of one family at odds with one another because two brothers – Owen and Crudup, respectively – find themselves on opposite sides of the law. And finally, because of the era in which it is set, the film can exploit a plethora of '70s tunes to help establish the milieu (which it does with great frequency) and evoke feelings of nostalgia even though the story itself doesn't actually require it take place during any particular decade. All in all, bringing those elements together with French director Guillaume Canet (who acted in the original French film and also co-wrote the American version with James Gray) and you have a recipe for, if not a wildly successful film, at least one that seems poised to earn praise and to have awards lavished upon it.

Somehow, though, despite the valiant efforts of everyone involved, 'Blood Ties' fails to set fire to what is ostensibly an incendiary story. That story, which became the basis for the 2008 film 'Les Liens du Sang' (or 'Rivals') from director Jacques Maillot – itself based on a book, which was based on a true story – tells the tale of recently paroled criminal Chris Pierzynski (Owen), as he tries to reacclimatize to society after spending nearly a decade in prison. Chris' transition hits an early obstacle in the form of his drug-addled ex-wife Monica (Marion Cotillard) and his two estranged children. Making things more difficult is Chris' younger brother Frank (Crudup), a New York City police detective, facing pressure from his direct superior Lt. Colon (the always great Noah Emmerich) and above to distance himself from a known felon. Joining the fray is Chris' on-again off-again romance with Vanessa (Zoe Saldana), who recently left her husband played by the fantastic Matthias Schoenaerts ('Rust and Bone,' 'Bullhead') after Frank jailed him on what might be trumped-up charges. Rounding out the cast is James Caan as Pierzynski family patriarch Leon, Lili Taylor in a thankless role as Frank and Chris' sister Marie, and Mila Kunis as Chris' new love interest Natalie. 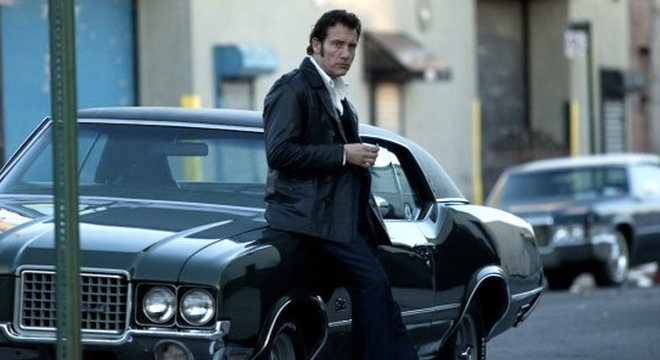 It is admittedly a large ensemble cast spinning a web of storylines that should conceivably intersect in interesting ways and granting the audience insight into the lives and minds of the Pierzynski clan. But even with 128 minutes (which was reportedly cut down from 144 minutes), 'Blood Ties' struggles to find a place for every character, and worse yet, the effort that's made to offer everyone a place at the table winds up diluting the central story of the murky gray morality between two brothers torn between familial loyalty and their true nature.

And to be honest, there's a lot of that going around, as the narrative seems structured primarily on the question of: What drives a person to do what they do? This inquiry is, of course, central to the tenuous relationship between Chris and Frank, which is grounded in a childhood flashback wherein Frank failed in his job as lookout and teenaged Chris wound up being arrested. The implication, then, is that Frank's nature (i.e., avoidance or, possibly, outright cowardice) may be responsible for nudging his brother down the slippery slope that eventually landed him in prison. Of course the screenplay also toys with the notion that Chris' nature is that of a true criminal (the only question being before or after serving his sentence), since his attempt to walk the straight and narrow upon being paroled is not so much short-lived, as it is destined to fail.

Soon, however, Chris' meteoric rise in the New York City underworld suggests a standoff between brothers is looming and to Canet's credit, he certainly generates ample tension between the two. Canet even takes it a step further by focusing more on the idea of Kunis and Saldana's characters as grounding elements for both men, effectively raising the stakes of what might be lost should the unthinkable happen. For her part, though, Saldana's character exists primarily to make Schoenaerts a relevant part late in the story, while Cotillard sadly winds up a mere plot device.

Despite the build-up of tension, the film refuses to release it in a manner that one might expect. That in and of itself is a charming element to 'Blood Ties,' which, in the end, winds up being a well-crafted and well-acted film (minus a few sketchy accents) that never quite heats up enough to be truly compelling. Furthermore, the film struggles throughout with the pervasive "Why?", as there's nothing immediately evident to suggest why this story had to be retold in New York in the 1970s. There is no raison d'être that makes the film feel like a definitive piece of cinema, or that the idea behind the remake was fueled by something more than "Let's tell this story with Brooklyn accents."

The end result is a potentially compelling film that gets more timid and unsure as it rolls along, leaving viewers with a movie that achieves entertainment, even though it was clearly reaching for enthrallment. 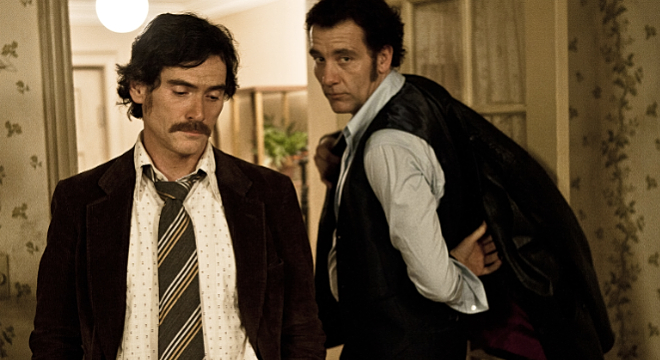 'Blood Ties' comes as a single 50GB Blu-ray disc + Digital HD Ultraviolet copy. The disc comes in a standard eco keepcase, and contains a handful of preview ahead of the top menu.

Whether it was during production or in post, there has been some doctoring of the image in order to give the film a distinct 1970s look that matches the meticulous production values. This means that there is a hint of grain present, and what also seems to be some light filtering going on to give the picture an aged, slightly worn look that helps sell the film as not just set in the '70s, but as product of the era as well. Viewer's mileage on this effect may vary, but thankfully it does little to deter from what is a very nice (but not great) image.

To that effect, fine detail is present in nearly every frame, while textures are abundant and easily visible. The film features a great depth of field that allows for background elements to be seen clearly and to help generate a consistent sense of time and place. Colors are deliberately muted, but hotter colors tend to stand out and look vibrant without being oversaturated. Contrast can be a little iffy at times in terms of whites looking blown out as a result of the filtering, but blacks tend to be quite robust and inky without any crush or banding being present.

Overall, this is a good image that maybe sacrifices too much for the sake of looking 40 years older than it actually is, but it's hard to fault the filmmakers for making a play toward complete authenticity.

The sound is presented in a DTS-HD Master Audio 5.1 mix that sounds terrific from start to finish. Dialogue is clear and distinct and is delivered with some nice flourishes in terms of directionality and imaging. Those flourishes are carried through in the immersive atmosphere, which emanates primarily from the front right and left channels, but is successfully spread about the rear channels to further establish a palpable sense of place. Balance is handled nicely, as the music will drop slightly to make room for dialogue or sound effects when needed. When it is not needed, the many familiar musical selections sound absolutely fantastic and seem to utilize every ounce of the lossless track's capabilities. LFE is present in sound effects and music, which adds to the overall depth of the mix.

This is simply a complete audio mix that offers everything with complete clarity, richness of sound, and in a precisely engineered fashion – a truly great sounding disc.

Blood Ties: Behind The Scenes Featurette (HD, 26 min.) – This is a longer than usual, but still fairly standard behind-the-scenes look at the making of 'Blood Ties.' There are some interviews with the cast and filmmakers and a few shots that show the filming in progress.

'Blood Ties' will leave you wanting more, but mostly in the way of feeling unfulfilled, rather than craving another go-round with these characters. For all its sharp plotting and characterization, the film just doesn't generate much heat. It is clearly a well-crafted film, and it should help garner some interest in Canet's next directorial effort, but that may be all this movie does. With a nice, stylized image and fantastic sound, this one is worth a look.

Sale Price 14.45
List Price 19.99
Buy Now
3rd Party 19.99
In Stock.
See what people are saying about this story or others
See Comments in Forum
Previous Next
Pre-Orders
Tomorrow's latest releases