Lured by the promise of an Australian holiday, exchange student Paul visits the notorious Wolf Creek Crater. His dream Outback adventure soon becomes a horrific reality when he encounters the site’s most infamous local, Mick Taylor (John Jarratt). When Paul attempts to flee, Mick pursues him across a hostile wasteland and eventually drags him back to his underground lair. After seeing the true magnitude of Mick’s monstrosity, Paul’s only hope of surviving, where no one has before, will be to use every ounce of cunning to outwit the man behind the monster.

Except for one scene very early on where the use of CGI is understandable, 'Wolf Creek 2' is the sort of horror movie fans crave and demand, where the filmmakers rely more on gruesomely realistic practical effects and on-screen gore than fake computer trickery. Like one of the characters on a backpacking hike through the Australian outback, watching dumbfounded and mouth agape as her friend's head is slowly sawed off with the killer's signature Bowie knife, we watch in amazement at the ghastly display of violence. Of course, other contemporary horror flicks can be as equally shocking, but there is an old-fashioned sensibility to the production and the script by Aaron Sterns and Greg McLean, who also directs, which places this feature just a cut above the rest.

This subtle feeling of something dated is largely responsible to the film's frighteningly perverse old-fogey of a villain, Mick Taylor, the loathsome sort you end up liking because he has such a terrifically well-developed personality. And John Jarratt is simply fantastic in the role with a sniveling crooked smile that proudly acknowledges the man's twisted passion for hunting and collecting human flesh. Loosely modeled on two of Australia's most notorious serial murderers (Ivan Milat and Bradley Murdoch), Jarratt brings a deliciously wicked wit and charm that's infectious. As much as we are repulsed by him, we're also enjoying his presence and strangely entertained by his sick moral sense. With a childlike twinkle in his eyes, the man happily and enthusiastically chases after his victims.

This is an aspect sadly missing in many contemporary horror flicks, especially in those where the gore is given a great deal more attention, but McLean and cohorts do brilliantly in making this about the crazed madman and his sadistic methods. That we get to actually see his depraved debauchery is basically icing on the cake — at least, it is for devoted horrorhounds that love such an engaging monster as part of an equally agreeable plot. Almost as if channeling the likes of Hitchcock's 'Psycho,' the film opens with a McGuffin, a German couple named Rutger (Phillipe Klaus) and Katarina (Shannon Ashlyn) hitchhiking their way to Wolfe Creek Crater. They are a likeable pair who, for the first quarter of the movie, comes close to being picked up by our ruthless killer, only to be interrupted by other vehicles driving the deserted highways. 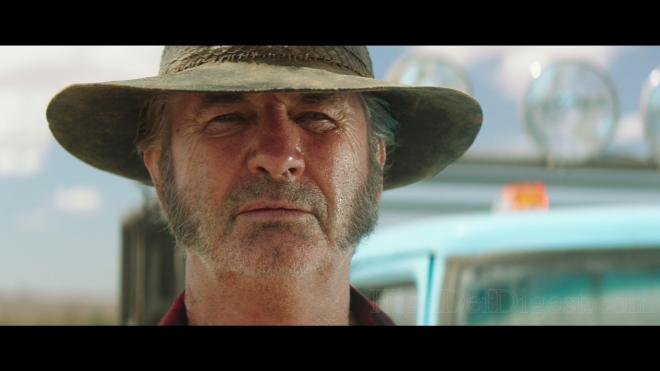 McLean does a great job in lulling his audience into a sense of familiarity, of anticipating how the story will progress. And for the most part, he lets viewers guess correctly. But the moment we've fallen into that comfort zone, the narrative suddenly derails in an entirely different direction with the introduction of good Samaritan Paul Hammersmith (Ryan Corr), a British surfer on vacation who unexpectedly becomes Mick's next rat to chase. With small hints of Tom Hardy in his performance, which I mean as a compliment, Corr delivers a believable seriousness in his distressing attempts to flee the maniac, futile as we already know it is. Once captured, the plot takes yet another sudden turn when Mick decides to play games, a brilliant back and forth which is a hellish, agonizing experience for Paul.

Despite the obligatory "Based on a True Story" marketing ploy, and even a silly onscreen text that maintains the illusion, 'Wolf Creek 2' has little to do with reality. However, compared to its decently-satisfying predecessor from 2005 which takes far more liberties, this film takes inspiration from actual events, particularly the murders committed by Bradley Murdoch. Nevertheless, McLean turns it into a beast of its own with a monster that is ironically and disturbingly charismatic, thanks of course to Jarratt's delectable performance. I'm surprised by how much better and stronger this sequel is, which is a feat in itself, but as mentioned above, this is ultimately due to McLean allowing more time with the main villain, a marked improvement that makes this production all the more entertaining.

Image Entertainment brings 'Wolf Creek 2' to Blu-ray as a two-disc combo pack. The Region A locked, BD50 disc is housed inside a blue keepcase with a DVD-9 copy on the opposing panel and a lightly embossed slipcover. After a couple skippable trailers, viewers are taken to a screen with full-motion clips and the standard menu selection along the bottom.

'Wolf Creek 2' debuts on Blu-ray with an exceptional and often stunningly beautiful 1080p/AVC MPEG-4 encode (2.35:1) that displays Toby Oliver's gorgeous photography of the Australian outback with rich, detailed clarity. The freshly-minted, digital-to-digital transfer shows razor-sharp definition, exposing the tiniest object inside Mick Taylor's dungeon and the peak of mountains in the far distance. Facial complexions are highly-revealing with lifelike textures and plainly visible pores while the stitching and threading in the clothing of actors are distinct. Contrast is pitch-perfect with brilliant whites, and brightness levels are nicely balanced with deep, rich blacks and strong shadow delineation. Primaries are vivid and dazzling, while secondary hues are animated and full-bodied.

The gory suspense continues with an excellent DTS-HD MA soundtrack that fills the room with a variety of sounds from Australia's wildlife. The rears are continuously active with subtle effects and flawless panning, from the harsh squawk of birds flying overhead to desert wind blowing through a desolate landscape. The music and song selections also bleed into the back, creating a satisfying soundfield that keeps viewers engaged. Inside Mick Taylor's dungeon, noises in the distance, like chains rattling and water dripping, are well placed and discrete. Vocals are plain and distinct in the center of a well-balanced soundstage with outstanding channel separation. With a detailed, extensive dynamic range, the lossless mix also comes with crisp, room-penetrating highs and a powerful low-end that adds palpable weight to the action and music with a couple good moments hitting decently low (bass chart).

'Wolf Creek 2' accomplishes a rare feat by being better than its predecessor in devoting more storyline to the film's main villain. The sequel's success also rides on the shoulders of John Jarratt's outstanding performance as the charismatic but otherwise repugnant Mick Taylor. The Blu-ray arrives with an excellent audio and video presentation that will greatly please gorehounds and horror fanatics. Supplements are on the light side but satisfying nonetheless, making the overall package worth a look for the curious and the devoted fanbase alike.

Sale Price 11.6
List Price 34.97
Buy Now
3rd Party 29.99
In Stock.
See what people are saying about this story or others
See Comments in Forum
Previous Next
Pre-Orders
Tomorrow's latest releases