Overview - From director Michael Bay and executive producer Steven Spielberg comes a thrilling battle between the AUTOBOTS and the DECEPTICONS. When their epic struggle comes to Earth, all that stands between the evil DECEPTICONS and ultimate power is a clue held by Sam Witwicky (Shia LaBeouf). Join the fight for mankind in the extraordinary adventure that “features some of the most spectacular action and effects sequences of any movie of its kind and will appeal to the kid in all of us” (Claudia Puig, USA Today).
OVERALL
Highly Recommended 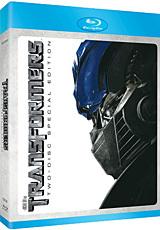 There's a well-known theory often referred to in film criticism called "suspension of disbelief." It says that in order to become lost in the world of a movie, we don't have to believe all of the events happening up on the screen, we only have to not disbelieve them. It's a cinematic law pushed to such extremes by 'Transformers' that perhaps a new edict should be named in its honor -- "suspension of all incredulity."

This, after all, is a film built around the concept of a race of warring alien beings that come to earth disguised as cars. Still, as inane as its premise may be, the true wonder of this film is that -- at least on a purely visceral level -- it works. Indeed, seemingly against all odds, 'Transformers' is the kind of gleefully stupid summer blockbuster that, whatever its faults, manages to tap into that mouth-agape 12 year-old inside us all.

The story itself has just enough of a set-up that we are allowed to kinda-sorta care about the characters before the robots show up. Future son of Indiana Jones Shia LeBeouf is Sam Witwicky, your typical suburban kid familiar from just about every Steven Spielberg flick made before 1985. He's kinda nerdy but kinda cute, wise beyond his years but not a smart-ass, and just starting to rev up a testosterone-fueled interest in girls that promises to rival his boyhood love of cars. So mom and pop (Julie White and Kevin Dunn) decide it's time for junior to get his first car. After a few minutes of let's-get-it-over-with exposition, Sam and his dad arrive at a used car lot, and 'Transformers' really begins.

It's at this point that it's impossible to continue a plot synopsis of 'Transformers' with a straight face. The car that Sam picks (or rather, the car that picks him), is actually "Bumblebee," one in a race of noble Autobots that have come to Earth to battle the dastardly Decepticons. Both are rival alien species that possess such awe-inspiring intelligence that they choose to disguise themselves on our planet in the form of clunky machinery. It seems that war has been raging for eons on their home planet of Cybertron, with both sides battling for control over a magical talisman dubbed the Allspark, which gives unlimited power to whomever (or whatever) possesses it.

No matter what I say, those who haven't seen the film will be lost beyond this point, so I won't even try to explain how the following makes sense in the world of the film. Not how Sam selling a pair of his deceased great grandfather's sunglasses on eBay turns out to be the secret to unlocking the location of the Allspark on Earth. Not how Sam's love interest, the uber-hot Mikaela Banes (Megan Fox) just happens to be the daughter of a mechanic and doesn't bat an eye when faced with a giant Autobot. Not how the military soon gets wind of Sam's new car, and sends the most unlikely special forces agent ever, Agent Simmons (John Turturro) to round up a host of teenage geniuses to help capture Sam and Bumblebee and use them to fight the Decepticons. And not how, by the time the robots finally do battle in downtown Los Angeles, all of the major characters and every major Autobot and Decepticon has somehow managed to find themselves standing on the exact same street at the exact same moment, all trying to blow each other up.

Bottom line, 'Transformers' gives Michael Bay the chance to do two things. One, it allows him to rebound from the box office fiasco that was 'The Island' with a guaranteed mega-hit. And two, it gives him the perfect material for his fast-cut, smash-a-minute sensibilities -- what better story for a filmmaker like Bay than a movie about a boy, his robot, and a legion of merchandising tie-ins hell-bent on destroying the world while they destroy each other?

But for me, what makes Bay's 'Transformers' a better film than most of his previous work is that he brings a surprising level of sensitivity to the material, infusing such a genuine sense of humanity into his central characters that by the time the Autobots (led by the benevolent Optimus Prime) are hiding outside Sam's house like Godzilla-sized house pets, trying not to disturb the neighbors, it all makes some sort of bizarre, surreal sense. Yes, this is all a set-up for the destruction to come, but it is also a coming-of-age story with heart, which for a largely technical filmmaker like Bay is no small accomplishment.

I realize I'm in the minority, but it is only when the film's big third act commences that I personally begin to lose interest. It is here that Bay's love of military might takes over, as our nation's finest swoop in to try to prevent Cybertron's civil war from being staged on Earth. Of course, there's no stopping the inevitable, and so we have a nearly 30-minute extended action sequence where all manner of Los Angeles buildings are demolished as a parade of giant robots march down the streets and beat the crap out of each other.

Ultimately, how much you enjoy the climax of 'Transformers' is likely to depend on how much you love robot destruction porn. Personally, I was quickly desensitized to the action, but clearly millions of other moviegoers disagreed with me (to the tune of a nearly $1 billion worldwide haul), so I'm not going to argue that Bay got the formula wrong. Still, I can't help but feel that the director has a better movie in him -- one that truly integrates the action and his spastic visual style with a coherent, resonant story. Having said that, if you're willing to check your brain at the door and hold on tight, there's no denying that 'Transformers' is a cinematic roller coaster par excellence. 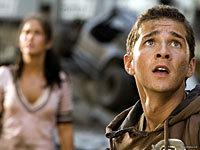 'Transformers' is Paramount's top-selling next-gen title ever (on either format), and previously hit HD DVD back in 2007 with a 1080p/AVC MPEG-4 (2.40:1) encode. The studio has not messed with their golden goose for Blu-ray, and again trot out the same specs for this go-round. But that ain't bad news, because you can just about pick any scene on this disc and you've got great demo material.

Michael Bay's visual style has always been one of overkill, and 'Transformers' is no exception. But this is arguably his most ambitious film stylistically, falling roughly into three distinct acts. The first third or so of the flick, with all the exposition leading up to the initial reveals of the main Transformers is quite "dirty," with heavy use of filters to dress down colors and add a more diffused look. Once the Autobots arrive on the scene, the second part of the film takes place almost entirely at night, with hotter contrast but brighter hues, and the image really pops here. Finally, the extended city battle with the Decepticons is again awash with harsh daylight, and so much CGI and fast-cutting that the last 30 minutes of the movie often looks like one big ball of motion blur.

Impressively, this transfer handles it all very, very well. Despite the edgy contrast which results in the usual hot whites, detail ranges from excellent to exceptional, with even the widest, most CGI-crammed vistas finely textured and rich. Colors, while again all over the map, are rendered accurately and without noise or loss of stability. Unfortunately, there is some over-saturation in spots, making the image blur out in areas of solid colors and/or giving fleshtones a bit more of an orange-y wash than actual human skin. The level of sharpness can also be a problem at times -- I was surprised to see noticeable jaggies on slow horizontal pans (such as tracking shots of cityscapes, or chrome on vehicles, etc.), giving the presentation an edgy, digital sheen. All other aspects of the transfer are perfect, though, with rock solid blacks, an absolutely pristine source and not a hint of compression artifacts -- remarkable considering the film's length and intensity of fast action.

Does 'Transformers' look absolutely "perfect?" No, but it is pretty damn close. And stylistically, this is somewhat of departure for Bay (at least compared to the perfume commercials passing for movies that have comprised most of his past work), so the nod to a newfound scumminess is appropriate. Make no mistake, you'll get a great show-off disc for your home theater here.

To say 'Transformers' is incredibly aggressive is an understatement. Discrete effects are relentless, but it is precisely this lack of subtlety that any fan of the film would want. Directionality, imaging, accuracy of localized effects, and the sheer depth of the soundfield are superb -- the "wall of sound" illusion is utterly transparent. Even the front soundstage is a stunner -- stereo effects are quite pronounced, and the first time you get to hear a Transformer "transform," it's about as cool as the first time you heard a lightsaber unsheathe in 'Star Wars.'

As you would expect, this is also the kind of disc your subwoofer will devour. Even at moderate volume levels I was blown away by the sheer low frequencies that were drummed out. Whether you're talking about the opening attack, the sequence in the desert with that weird "sand Decepticon," or the film's entire last 30 minutes, there's such a sustained low bass presence that it's almost like it's another character in the movie. The realism and texture to every sound -- from the effects to the score to the dialogue -- is reference-quality. Volume issues are also, thankfully, not a problem -- I was truly shocked that I didn't have to reach for my remote once, as dialogue is leveled nicely throughout. 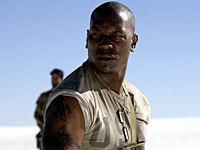 Paramount has ported over every last extra found on the previous HD DVD release of 'Transformers.' This is a very strong two-disc set, and the studio gives us full 1080/AVC MPEG-4 video on all of the materials to boot. (Optional English, French and Spanish subtitles are also provided.)

Depending on your point of view, 'Transformers' is either Hollywood high-concept entertainment at its finest, or at its most insipid. To be sure, it's everything you'd expect from a movie based on a toy line and directed by Michael Bay -- loud, one-dimensional and filled with enough robot destruction for ten other movies. This Blu-ray is impressive -- the transfer is great, the audio fantastic (and finally in high-res to boot), and there are hours of well-produced bonus materials. 'Transformers' was a no-brainer on HD DVD, and now it's even more of a no-brainer on Blu-ray.