Sale Price 12.99
Buy Now
3rd Party 12.92
Temporarily out of stock. We are working hard to be back in stock. Place your order and we’ll email you when we have an estimated delivery date. You won’t be charged until the item ships.
Release Date: June 24th, 2014
Movie Release Year: 2012
Release Country: United States
COLLAPSE INFO -

For about the last five years — maybe a little more — the health risks and environmental concerns surrounding hydraulic fracturing, commonly referred to by the general public as "fracking," has been a controversial hot button. Well, to be more precise, the topic has generated heated debate only amongst those who have even given the matter any attention. Many still remain in the dark about "fracking" — if they've even heard of the word in the first place — and know even less about the process of mining underground deposits of natural gas. Most surprising is that the average person doesn't know there has been a political, economic, and environmental controversy surrounding the whole issue.

And so, it comes as a bit of a surprise that conservative investigative journalist Phelim McAleer is pushing the subject as a frequently discussed hot button amongst Americans in his documentary 'FrackNation,' which he co-directed with his wife Ann McElhinney and Magdalena Segieda. Not only does he miss that mark by a large margin, but his argument is deeply reliant on the idea being true, which I will admit is sadly not. While I don't see eye to eye with McAleer's position, I will agree with his suggesting that the nation needs to be more informed and have open discussions about the advantages and downsides to "fracking." I'm also of the same opinion that the controversy is currently a one-sided debate.

To bring the other side of the controversy to light and essentially defend hydraulic fracturing, McAleer points the finger at Josh Fox's highly-critical documentary 'Gasland' as the central focus of his claim, which is that disadvantages and health risks have been grossly exaggerated. As he sees it, the low-budget film is largely responsible for spreading misinformation and the leading cause for generating an anti-fracking fervor that has drawn the attention of various celebrities, pundits and politicians. The Irish-born journalist, who received funding for this project through the Kickstarter website, takes the opposite stance, which would be all well and fine if his argument didn't also feel largely striving for an ulterior motive. 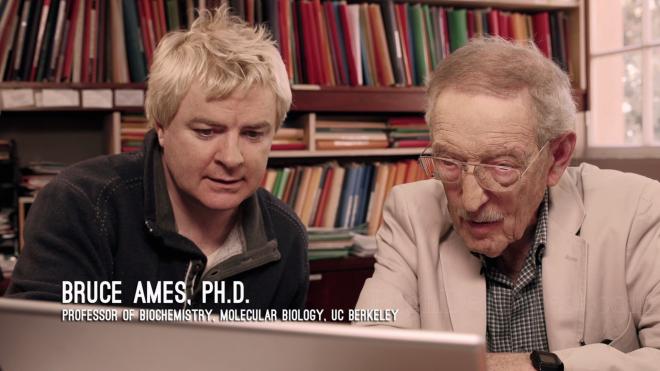 Granted, the approval and acclaim, however small, for Fox's independent doc has definitely popularized the debate and brought it into the public forum, to the point that new state legislation in made every year based mostly on little substantiated fear and concern. However, the film is not the provocative juggernaut reaching the heights of 'An Inconvenient Truth' or a Michael Moore feature as McAleer tries to portray it. Nonetheless, his main point of issue is the infamous scene where Fox claims water supplies are contaminated with methane gas and caused by the fracking process, which is the doc's strongest aspect. From here, the filmmakers refute other claims with less consideration and effectiveness.

Despite making his case and efficiently ruining Josh Fox's arguments, Phelim  McAleer's 'FrackNation' is an agenda-driven documentary that unabashedly reasons for our continued dependency on petroleum energy and limited natural resources. While trying to demonstrate Fox's film as some sort of fear-mongering, McAleer succumbs to essentially identical tactics of manipulation and various fallacious ploys aimed at a viewer's pathos. Only, his is in the effort for supporting the opposing viewpoint, using soft emotional music in the background and images of hardworking farmers are shown living peacefully alongside fracking sites while solar and wind power is then portrayed as the real monsters. In the end, McAleer's movie fails to settle the controversy yet succeeds at muddling and further confusing the subject, not unlike the very target he claims to counter.

Magnolia Home Entertainment brings 'FrackNation' to Blu-ray on a Region A locked, BD25 disc inside a blue, eco-cutout case. After skipping through a variety of other previews from the studio's catalog, viewers are taken to a static menu screen with the usual assortment of options.

The documentary fracks Blu-ray with an impressive and mostly excellent 1080p/AVC MPEG-4 encode that pretty much looks exactly as we'd expect from a freshly-minted digital source. The 1.85:1 image shows sharp detailing in nearly every scene, revealing pores, wrinkles and blemishes in various faces. Contrast and brightness are very well-balanced with bright, crisp whites and deep, inky blacks. Richly-saturated colors animate the video with life, maintaining a fresh and lively appeal throughout. Only visible issues come from segments recorded on smartphones, like a few impromptu interviews, and a variety of stock footage, which display aliasing, poor contrast and generally look soft. Otherwise, the high-def transfer is quite pleasing.

Although not quite as good as the video, 'FrackNation' makes a splash with a relatively strong DTS-HD Master Audio stereo soundtrack that gets the job done. Being a documentary, conversations and interviews are essential, and the lossless mix does not disappoint in this regard, delivering crisp, clean vocals in the center from beginning to end. Imaging is not immediately impressive, largely seeming narrow and restrained, but when music suddenly plays in the background, the design momentarily comes alive with a generally wide and welcoming soundstage. The mid-range is clean and detailed while low bass is adequate for the subject matter. On the whole, the movie offers a strong audio presentation.

Despite making his case and efficiently ruining Josh Fox's 'Gaslands,' Phelim  McAleer's 'FrackNation' is an agenda-driven documentary that unabashedly reasons for the continued dependency on petroleum and limited natural resources. While trying to demonstrate Fox's film as some sort of fear-mongering, McAleer succumbs to essentially identical tactics of manipulation and various fallacious ploys in support of the opposing viewpoint. The Blu-ray arrives with excellent video and good audio, but supplements offer very little to the overall package, making it a decent addition for those interested in hearing both sides of the controversy.

Sale Price 12.99
Buy Now
3rd Party 12.92
Temporarily out of stock. We are working hard to be back in stock. Place your order and we’ll email you when we have an estimated delivery date. You won’t be charged until the item ships.
See what people are saying about this story or others
See Comments in Forum
Previous Next
Pre-Orders
Tomorrow's latest releases