When narcotics detective Eugene "Mack" McCanick (David Morse) discovers that Simon Weeks (Cory Monteith) has been released from prison, he instigates a brutal manhunt, without permission from the Chief of Police (Ciaran Hinds). The frenzy of paranoia and violence that follows pushes Mack and his partner to the edge of the law. The closer Mack gets to his prey, the closer he gets to a secret from his past - one that only Weeks can expose.

Recognized now as the last film of the late Cory Monteith, 'McCanick' also boasts a gaggle of underrated and underutilized actors like David Morse, Mike Vogel, and Ciarán Hinds (though that last one may be debatable as far as being underutilized), who were likely drawn to the film for a chance to be in a hardboiled crime story about a vaguely dirty, hard-drinking, violent-tempered cop on the edge, and the devastated personal life he's trying to recover from. (In other words a wildly original film). And, to their credit, the actors put forth the kind of casehardened effort one expects to see from this kind of subgenre endeavor that harbors many of the same unnecessarily ostentatious flourishes as, say, 'Narc' did back when it was released. Case in point: Ciarán Hinds even went so far as to grow the prototypical "cop stash" and have his hair styled in the hasn't-showered-since-the-Reagan-administration method that denotes his character's steely edge.

For all the effort Morse and Hinds put into their big performances, the material of 'McCanick' simply does not support such bombastic presentations. In that regard, the seams quickly begin to show in almost every scene, and the narrative strains under the combined weight of their effort. In fact, Hinds is only in the film for about six minutes, and the idea that his performance sticks in the viewer's brain to that degree should say something about the grandiosity of his cop routine. That being said, the film is certainly David Morse's vehicle, allowing him to turn in a similarly showy effort that serves as an example of his many talents as an actor; however, the effort is completely incongruous with the quality of the rest of the film.

'McCanick' takes place in what is arguably the worst day of Detective Eugene 'Mack' McCanick's routinely unpleasant life. For starters, it's his birthday, and, to make matters worse for the cantankerous lawman, Simon Weeks (Monteith), a criminal Mack had put away some time ago, has been released on early parole. After being warned by Captain Quinn (Hinds) not to go chasing Weeks, McCanick – proving he's a cop on the edge – does just that, lying to his young, ambitious partner-with-a-ridiculous-name, Floyd Intrator (Mike Vogel) about his intentions with Meeks. After a routine questioning goes awry, and Intrator is critically wounded, McCanick's terrible, horrible, no good, very bad day begins to slowly unravel even further, as the narrative interweaves backstory in at random intervals, attempting to deepen a McCanick-Weeks mystery that was never properly justified in the first place. 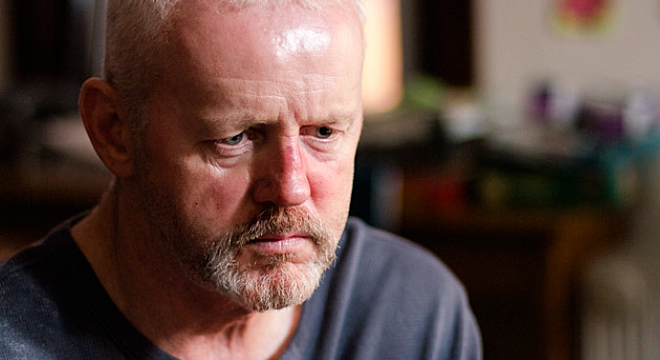 For all its glossy shots, big acting, and demonstrative editing, 'McCanick' ultimately falls victim to a script that tries to do too much and collapses under the weight of its own unnecessarily long-winded and elaborate structure. Utilizing hollow flashbacks and affectedly contemplative scenes of either total silence or seething rage, the film moves languorously and extends a 10-minute premise into a 98-minute runtime. Mostly, the narrative suffers because it overextends the value of suspense the spot-it-from-a-mile-away twist purports to offer – which ultimately pushes the film to a hackneyed climax that seems to measure success by how many threads it manages to leave dangling when the screen fades to black.

What is frustrating about 'McCanick' is the manner in which director Josh C. Waller indulges in so many disappointingly typical affectations of heavy drama and genre storytelling. In this model of filmmaking, the belief seems to be there is no scene that can't be made better by turning up the volume on the performance to Shatnerian levels, and adding some hand-held camera to enhance the effect. Meanwhile, the narrative's interwoven structure sure looks complicated and, at some points even intricate, but upon closer inspection, it's all just unnecessary, overly elaborate hokum meant to impart a gloss of superficial prestige on what is otherwise a middle-of-the-road cop thriller. In the end, it all boils down to a complex failure that sacrifices both Monteith and Vogel by transforming their characters into mere plot devices, and then overcomplicates a straightforward story with a highly structured style that adds nothing and takes away almost everything. 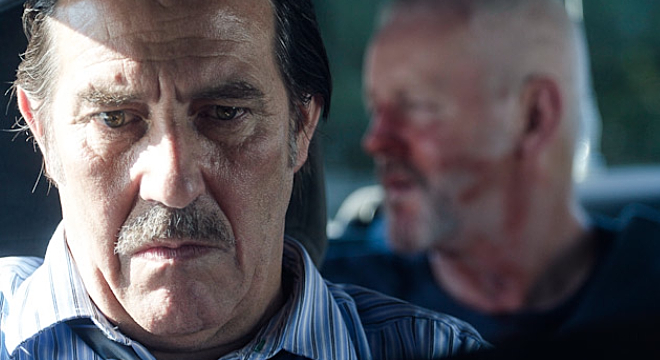 'McCanick' comes from Well Go USA Entertainment as a single 25GB disc in the standard keepcase. The film will auto play several previews for Well Go releases, most of which are made on this side of the pond.

The 1080p AVC/MPEG-4 image suffers from some of the stylistic choices made during the film's production. There isn't any indication that a heavy filter was used, but the image does tend to look slightly manipulated in wider shots, creating an overly warm, almost hazy veneer that reduces the fine detail to a certain degree. For the most part, however, the image works to provide an above average standard of detail that renders facial features and textures quite well – albeit primarily in close ups. Colors look mostly rich, though the warmness of the image and somewhat dull, industrial palette don't offer up much in the way of vivid colors that truly stand out. Contrast is high throughout, which actually works to even out the starkness of the image's daytime shots, by keeping the white levels from running too hot.

However, when the film dips into shadow or darkness of any kind, the image all but falls apart. Crush is heavy, and it produces an unnatural effect on the image that causes the picture to become somewhat pixilated in places, or like trying to watch a scrambled channel on an old school satellite dish. By the time the film reaches its conclusion at the end of a very long day, it is awash in problems that go far beyond the script.

The DTS-HD Master Audio 5.1 is much better, and far more consistent that the disc's image. The sound here plays up the dialogue and the film's score with equal exuberance. Actors are clear and distinct, while the score manages to come in be known without overwhelming everything else that is going on. The only time the score overreaches is near the film's conclusion, when it works doubly hard to convey sentiment that simply isn't there.

Elsewhere, the mix does a very nice job handling sound effects. Gunshots ring out with considerable power, utilizing LFE to enhance their presence. Meanwhile, the film's setting is often in distressed urban areas, and the mix creates a nice atmosphere and immersive effect, giving the film the more realistic, in the moment edge that it clearly wants to have. It is just a shame the rest of the film couldn't have followed suit.

Behind the Scenes (HD, 10 min.) – Standard issue behind-the-scenes stuff that features some interviews with the cast, wherein the talk about why this was such a remarkable script they simply couldn't pass up.

Deleted Scenes (HD, 17 min.) – A collection of scenes that were mercifully removed from an already overlong, sleepy film.

'McCanick' was likely going for that prestige label when it began production, but like so many films concerned more with the appearance of complexity and weight than actually competently telling a compelling story, the movie winds up being devoid of both. Monteith's name may help garner some interest by those familiar with this role on 'Glee,' but he is underutilized here, which works to his benefit, as he was woefully miscast in the role of Simon Weeks. Morse is good, but tends to turn things up to eleven when a more mid-range performance might have actually been more effective. A disappointing feature all around with only the audio managing to stand out. Skip this one for sure.

Sale Price 5.41
Buy Now
3rd Party 49.99
In Stock.
See what people are saying about this story or others
See Comments in Forum
Previous Next
Pre-Orders
Tomorrow's latest releases