A Queens couple who specialize in robbing mafia social clubs stumble upon a score bigger than they could ever imagine, becoming targets of both the mob and the FBI in the process.Rob the Mob chronicles the lives of a real-life Bonnie and Clyde who made the bold move to rob and humiliate some of New York Citys most powerful mobsters. Fresh from prison for a small-time crime, reunited lovers Thomas (Pitt) and Rosie (Arianda) find themselves in need of cash. After hearing testimony from John Gottis high profile trial that mob social clubs are gun-free, Thomas and Rosie brazenly rob these underground spots operated by major crime families in the City. Unwittingly, they come across something much more valuable than money: a list of every mobster in the families. Now the feds, family members, and rival mobsters are on the hunt for the most notorious lovers since Romeo & Juliet.

'Rob the Mob' is an appreciably energetic true-crime tale about Tommy and Rosie Uva, a couple of not-so-hardened criminals whose own so-stupid-it-just-might-work crime spree unintentionally wound up sending several mafia types to prison, further hobbling organized crime in the wake of the John Gotti trial. And while the characters are likened to everything from Robin Hood to Bonnie and Clyde, it seems as though director Raymond de Felitta most desperately wants stars Michael Pitt and Nina Arianda to be analogous to Christian Slater and Patricia Arquette's amateur scofflaws from 'True Romance.'

'Rob the Mob' stands as the second of de Felitta's efforts with Andy Garcia serving as producer – which explains why Garcia has taken the role of high-ranking Mafioso-cum-procurer-of-deli-meats, Big Al, while 'Magic City' alums, Michael Rispoli and Yul Vasquez take on the roles of Sal and Vinny Gorgeous, respectively. But the film also counts Ray Romano, Frank Whaley, Burt Young, Griffin Dunne, and 'Orange is the New Black' member Samira Wiley among its cast. It's just too bad the screenplay by Jonathan Fernandez doesn't bother to give anyone much to do.

For the most part, 'Rob the Mob' is concerned with painting its mischief-making protagonists as sympathetic as possible. Yes, they begin the film as drug-addled armed robbers, but they're the nice kind of drug-addled armed robbers. Tommy is the sort of sweet natured guy who picks up flowers for Rosie while he's being shot at by the proprietor of a flower shop he just knocked over. The two argue like Ralph and Alice Kramden when sentenced to prison, but 18 months later, they're back together, trying to make an honest day's wage working as debt collectors for Griffin Dunne's well-meaning, very Ronald Reagan-esque businessman, Dave Lovell. 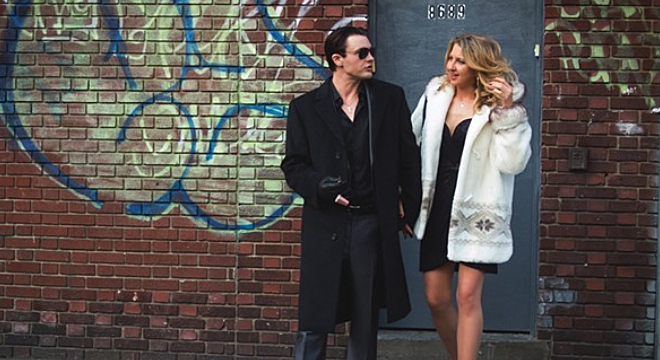 As you might expect, working in the only job two ex-cons can likely get doesn't pay as well as robbing people, and soon Tommy gets the bright idea to start knocking off mafia-run social clubs because, as he overhears at the Gotti trial, it's against the rules for wise guys to bring guns into the club. Tommy is painted as eager but a little naïve – the Uzi he somehow acquires to aid in the planned robberies is at first too much for him to handle – which allows Pitt to do what he does best: walk a fine line between dodgy scumbag and likeable grease ball, as he did in 'Boardwalk Empire,' and more poignantly in Gus Van Sant's 'Last Days.'

Rosie, meanwhile, is even more eager, after her initial reluctance is wiped away when Tommy empties out a paper bag full of cash and pilfered gold watches, rings, and bracelets. For her part, Arianda plays up Rosie's belief that she and Tommy are doing something good – taking from the people who take from others – and soon she begins to buy into the media coverage that practically makes them celebrities. Her fascination with fame and recognition becomes the undercooked catalyst to bring Romano's New York journo Jerry Cardozo into the mix, as he interviews the two and soon becomes fond of the misguided youths. That fondness turns to concern, however, when Tommy and Rosie become organized crime's biggest nightmare after one of their robberies puts a secret list of the mafia's hierarchy in their possession.

But the film simply tries to play too many angles, and because of that, the whole product becomes a watered down mess. For as much effort as Fernandez's script puts into making Tommy and Rosie sympathetic, it spends too much time trying to do the same with Big Al, painting him as something of an accidental crime boss – a man who was dragged into the life after committing a crime based on principle, rather than outright greed. The notion of people acting according to the expectations set forth in some kind of unwritten code nearly become the film's unifying theme, but to no avail. The screenplay doesn't allow for the various parties to interact with one another in an engaging enough fashion for such a concept to coalesce. Instead, the narrative settles for a simple binary wherein it’s the inadvertent good versus decidedly bad, without accurately demonstrating why the term applies to either.

Rather than establish its protagonists as criminals, splashing around in the murky morality that comes from their stealing from other criminals, 'Rob the Mob' is determined to deliver them to the audience as unheralded heroes who helped put a massive dent in organized crime in the early '90s. The only trouble is: the screenplay never adequately connects the ever-widening dots between Tommy and Rosie, Big Al, and the FBI. The script certainly tries to utilize Romano as the bridge between the disparate groups, but that only results in his character being reduced to a mere plot device, a failed attempt to bring some significance to a story that only achieves a modicum of the substance the film was aiming for. That substance unsurprisingly comes from the coda that pops up on screen before the end credits.

Ultimately, 'Rob the Mob' is somewhat entertaining when focused on the desperate lovers' ploy to get ahead by undertaking such a risky endeavor, but it soon falls apart when the script attempts to add gravitas by becoming a bigger story than the film itself is equipped to handle. The effect is a diluted story that is further weakened with the arrival of additional characters that only serve to further the plot. All of this adds up to a tonally inconsistent effort that, like its protagonists, reaches for too much and comes back empty-handed. 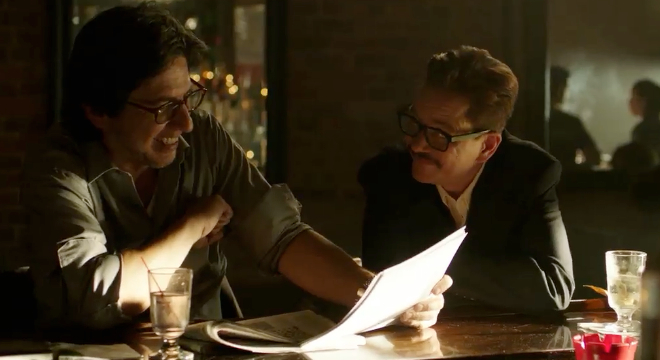 'Rob the Mob' comes from Millenium Entertainment as a single 25GB Blu-ray disc in the standard keepcase. There are a handful of previews ahead of the top menu, but they can all be skipped. The menu allows you to choose from the standard array of audio and subtitle options, which include a Director's Commentary. The disc also contains some deleted scenes.

The 1080p AVC/MPEG-4 encoded transfer offers a consistently high level of detail in an image that is only affected by what appears to be an attempt to age the look of the film through some slight filtering – which, thankfully, only tends to reduce some of the contrast in the exterior scenes set during the day. Otherwise, the image delivers fine detail in facial features, textures, and background elements, all of which help to create a compellingly accurate sense of time and place. Colors are muted, helping to convey that sense of the past, while also making the grittier elements stand out more.

Contrast is good but the image does maintain a slightly washed out look that keeps black levels from being truly deep and full-bodied. The trouble stems mostly from the white levels, which are perhaps deliberately tinkered with to create the aforementioned aged look of the film.

Overall, though, this is still a very nice image; it's just one that is trying too hard to convince the audience of something the movie should be doing with its story.

The Dolby TrueHD 5.1 mix handles the various aspects of the audio quite well by allowing the dialogue to come through naturally for the most part, and then presenting the sound effects, soundtrack, and score to be presented in powerful fashion. The only real issue is that the dialogue tends to sound somewhat muffled or lower than normal at times, which is further offset when the background or atmospheric elements come into play. In that sense, the balance might be off somewhat, as sound effects such as gunshots, car engines, squealing tires, and general noise of early '90s New York City can feel like too much of an overwhelming force during a scene where the interplay between characters should be paramount.

When the actors aren't playing off one another, the sound is actually quite good. The front right and left speakers do most of the heavy lifting in terms of music and direct sound effects, while the directionality and imaging bring the rear channels in to help with creating an immersive atmosphere that brings the setting to life. There is even some nice LFE present in certain scenes to add more depth and make for a richer listening experience.

If it weren't for the lower-than-expected dialogue levels, this would be a top notch mix.

Director's Commentary – Director Raymond de Felitta is on hand for an insightful and informative commentary that looks as much into the real-life circumstances of the story as it does the making of the film.

Too often, 'Rob the Mob' seems unsure whether it wants to be a gritty mob film or a criminal farce. That inability to decide on either results in the film feeling too disjointed – Garcia could easily be the star of his own languorous crime saga, while every seen Romano is in just makes you wish the whole movie was about him – and that sense of disorganization and distance weakens its various parts, resulting in an anemic film overall. While the image and sound are both good, and the commentary surprisingly interesting, 'Rob the Mob' is only worth a rental at best.

Sale Price 9.48
Buy Now
3rd Party 4.27
In Stock.
See what people are saying about this story or others
See Comments in Forum
Previous Next
Pre-Orders
Tomorrow's latest releases