Sam Rockwell stars as Doug Varney, a small town pharmacist with an overbearing wife (Michelle Monaghan) and an uneventful life running the drugstore he bought from his insufferable father-in-law. Following a chance encounter with a lonely trophy wife (Olivia Wilde), Doug embarks on an exhilarating drug-and-alcohol-fuelled affair with the most glamorous woman he has ever met. Take a walk on the wild side in this murderously funny dark comedy which also stars Ray Liotta and Jane Fonda.

'Better Living Through Chemistry' fits into that unique subgenre focused solely on the plight of semi-affluent, middle-aged, white suburban males that seemed to draw quite a crowd in the late-'90s and early-'00s. They are an interesting subset of films that, while mostly superficial and somewhat trite, seem to want to say something about the malaise that comes through achieving a sort of stasis in life, and how the accumulation of stuff and the ownership of things doesn't necessarily guarantee fulfillment. It's cookie cutter thematic claptrap, to be sure, and this film by co-writers and directors Geoff Moore and David Posamentier is, deep down, no different.

Ironically, in a movie about superficiality and the suburbanization of people, families, and culture, the most remarkable thing about it are the attractive and recognizable faces the production managed to land to star in the film. In that regard, the movie ostensibly lives and dies on the performance of Sam Rockwell, as the put-upon, eternally emasculated pharmacist Doug Varney, and, to a certain extent, the largely auxiliary performances from Michelle Monaghan and Olivia Wilde. That sense of triviality is carried even further, as film displays it isn't necessarily interested in exploring new ways of looking at upper-middle class melancholy – the story by Moore and Posamentier has all of the excitement and desire to divert from convention as the contraptions moving visitors through It's a Small World at Disneyland. That is to say: the script moves the plot along like it's on rails; there are no surprises, and really, no new ideas being investigated.

Early on, the movie devotes itself primarily to demonstrating the various indignities suffered by Doug at the hands of his overbearing wife Kara (Monaghan), his pseudo-emo son Ethan (Harrison Holzer), and, most egregiously, his arrogant and domineering father-in-law Walter (Ken Howard). Doug's wife is obsessed with winning a local bike race and running her spinning classes at a local gym. In a largely thankless role, Monaghan draws Kara as something of an alpha-female, always competing with those around her, and seeking to diminish Dough at every turn. Meanwhile, Ethan is painting his window black and eating smashed cookies and strawberry milk for breakfast, because Kara feels like a 12-year-old should be allowed to set his own boundaries and make his own decisions. When Ethan is accused of smearing feces on the lockers of some classmates at school, Kara responds with hostility and anger at the school's administrators and at Doug, rather than seeking to find the source of their son's problems. Adding to Doug's domestic gloom is the fact that he cannot change the name of the pharmacy he just bought from his father-in-law from Bishop's to Varney's, as he thought he might. 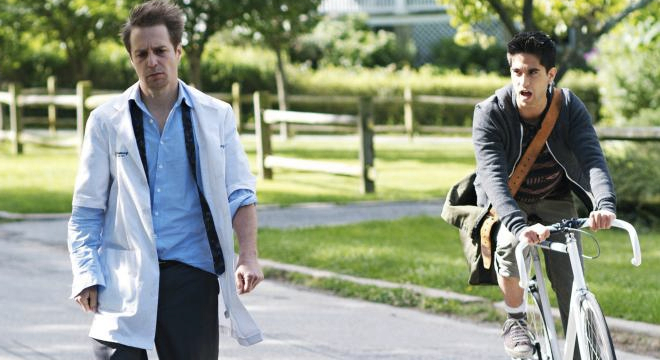 Doug has seemingly resigned himself to a lifetime of ignominy at the hands of those who should love him; he even allows his pharmacy employees to essentially have free reign, and to do as they please – which leads to Doug delivering the prescriptions Noah (Ben Schwartz) was supposed to, paving the way to his introduction with Olivia Wilde's white wine swilling trophy wife Elizabeth Roberts. Elizabeth is another example of the over-used trope (and term) manic pixie dream girl – though instead of teaching Doug to embrace life's mysteries, she leads toward a more nihilistic goal: drowning his sorrows in booze, drugs, and sex.

And for a while, it works. Doug becomes a more confident, energetic, and happy person. To his credit, Rockwell manages to turn his already ample charisma up a notch, conveying the frenzied high of a man looking at life through pharmaceutically crafted lenses. And for her part, Wilde manages to instill some depth into a character who is little more than a shallow, prurient catalyst for the protagonist's journey into self-actualization. Soon, however, like the inevitable, terrible crash that follows every high, reality slowly comes into focus and the feasibility of perpetuating such bliss becomes more and more unlikely. Elizabeth's husband Jack (Ray Liotta, who is wasted in such a small role) made her sign a prenuptial agreement denying her any money if they divorce before 10 years, while Doug finds his pharmacy is suddenly under investigation by the DEA for the sudden discrepancies in its inventory.

This sudden rush of reality carries with it a potentially greater penalty for Doug than the question of whether or not his wife will find out he's been sleeping with someone else. But the gravity of having his crimes found out is ostensibly erased when he and Elizabeth conspire to murder Jack and run off with the fortune she would inherit. The tonal shift of going from unfulfilled suburbanite, to drug-addled would-be murderer doesn't register. Like the rest of the film, the potential for such drastic action is as unlikely as Doug facing any real consequences for his exploits. Furthermore, by maintaining the balance of superficiality with thinly drawn characters like Kara, Walter, and Ethan, and perpetuating a consistent, flippant attitude towards its own narrative, the directors suggest such a shift is impossible.

Ultimately, 'Better Living Through Chemistry' suffers from the same kind of dissatisfaction its protagonists are seen to endure. The film acts as bored as its characters because the whole thing is just going through the motions; it's following a diagram too closely, and it is too obvious in doing so. If the film had attempted some sort of meta-commentary on dissatisfaction and boredom by addressing such concerns through recognition of the utter sameness of its own plot – or the similarities it bears to such films as 'American Beauty,' 'The Weather Man,' and most recently, 'The Oranges' – there might have been something beyond the performances worth talking about. 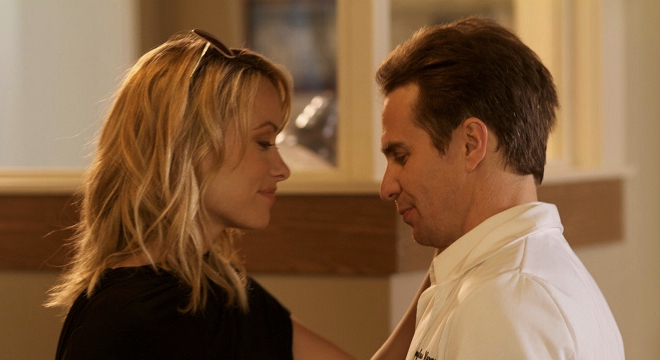 'Better Living Through Chemistry' comes from Universal as a single 50GB Blu-ray disc + Digital Download in the standard keepcase. There are a handful of previews ahead of the top menu, but the disc is free of supplemental content.

'Better Living Through Chemistry' has been given a very nice 1080p AVC/MPEG-4 encoded transfer that is bright, detailed, and filled with vivid colors. Although the cinematography of the film is mostly unremarkable, the image manages to make the best of it by presenting a highly detailed image that is rich with texture, depth. Skin tones are healthy and balanced against a lush palette that plays up the manicured lawns and tree-filled landscape of its milieu. Colors are rich and deep without being overstated, giving the picture a subtleness that plays well with the banality its narrative is trying to convey. Contrast levels are high throughout, producing consistent, robust blacks and whites that are never overblown – even during the many sequences set in natural light. Edges are very crisp throughout, which is furthered by the complete lack of grain anywhere in the image.

This is a very nice image that plays with its environment well, and even manages to suggest a few subtle changes throughout that match certain beats in the narrative. Like the film, it's not entirely successful, but there are elements that seem to be reaching for something more.

'Better Living Through Chemistry' does not contain any special features.

For being such a banal, obvious film, 'Better Living Through Chemistry' does manage to get some fun, lively performances out of nearly everyone. Michelle Monaghan deserves a special award for putting forth so much effort with such an underwritten character (a skill she no doubt developed working on 'True Detective'), while Rockwell continues to impress with the energy he's willing to bring to an otherwise familiar, oft-seen character. Though Wilde has yet to find a role that allows her to be something other than the object of desire, she at least attempts to imbue her character with something beyond the ability to inspire lustfulness in male characters. Ultimately, this film just doesn't have anything new to say about the bizarre affliction known as suburban malaise. Instead, it simply retreads plot devices that've been seen time and time again. There's a nice looking image here and good sound too; it's not revelatory or original, but it's not a complete dud either. Give it a rent.

Sale Price 4.59
List Price 14.98
Buy Now
3rd Party 4.58
In Stock.
See what people are saying about this story or others
See Comments in Forum
Previous Next
Pre-Orders
Tomorrow's latest releases