Meticulous, sumptuous, and uncompromisingly, almost obsessively, maudlin, 'The Eddy Duchin' story is a film that falls into a peculiar subgenre of elaborate tearjerkers so blatant in their objective and overwhelming in their delivery, the intended effect is (by today's standards) all but reversed.  And yet, when the film was released back in 1956, the sort of earnestness it so eagerly puts on display was somewhat commonplace. At least that particular brand of melodrama was more familiar to and accepted by audiences back then. Audiences had a good run before they had to grow into the more cynical and, in some ways, even more credulous filmgoers of today who praise far more manipulative films that are far less honest about their intentions.

And that's the thing about 'The Eddy Duchin' story: it's guileless in its approach; the film practically announces itself by presenting the viewer with a handkerchief before the title card appears and Tyrone Powers' beaming smile pours across the screen in all it's unadulterated CinemaScope glory. It is the simple story of Eddy Duchin (Powers), a magnetic pianist who, against all odds, became one of the premier bandleaders of the 1930s only to watch as tragedy followed him at nearly every turn.

The film, directed by George Sidney, with luxuriant cinematography by Harry Stradling Sr., begins with an eager Duchin showing up in New York City unannounced, looking to make a name for himself with a band playing a casino for the high society crowd. Though he's initially turned away – having mistaken the bandleader's compliment of his piano technique for an offer of employment – it's Duchin's obstinate zeal that propels him through the early, brief setback and eventually into a part time gig playing intermissions. Of course, it's also Duchin's barely-contained passion and exuberance that first catches the eye of Marjorie Oelrichs (Kim Novak), a well-to-do New York socialite who not only likes Eddy for the way he handles himself behind a grand piano, she likes him for the man he so desperately wants to be. 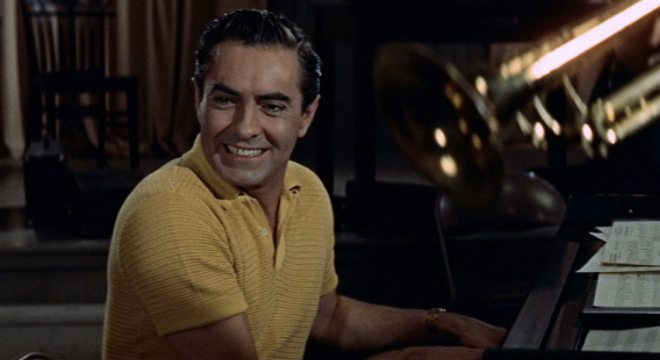 That man, of course, is a familiar one; Eddy wants to transform himself into a man of great acclaim, a man of merit, and a man who can write his own ticket. This being the midway point of the 20th century, such relentless idealism in both narrative and fictional character is unsurprising. In fact, one of the major undercurrents of 'The Eddy Duchin Story' is that Horatio Alger-like quality of pulling oneself up by the bootstraps, and persevering and eventually succeeding through hard work and good old fashioned American determinism. But Eddy's perseverance is put to the test early on, as the only thing the film enjoys more than overarching themes of manifest destiny and a clever twist on the notion of pushing westward is it's own mawkishness, and a unrelenting desire to reduce its audience into a blubbering mess. The interesting thing is: the last two are exactly what make it worth watching.

Much of the time, 'The Eddy Duchin Story' holds its cards facing outwards and plays them with the most leaden hand possible. This is a film where the script feels like it is comprised of two parts foreshadowing, and one part melancholy, with a dash of old-timey tunes thrown in for atmosphere. No sooner have Eddy and Marjorie tied the knot than she's swooning in his arms, crying out how the wind frightens her – even from the towering perch of their exclusive New York City apartment. Sure enough, these frightening (read: change inducing) winds alter the course of Eddy's life forever. Soon after, he loses his wife, but gains a son named Peter (Rex Thompson), whom Eddy will go on to ignore for the next several years, as he copes with the grief of losing his wife by first burying himself in his work – which means heading out West, naturally – and then by enlisting in the military, to help fight in WWII.

Frankly, all of this feels like a rather exhaustive preamble to what later becomes the story of a man attempting to reconnect with his child through the only form of communication he was really ever good at (which Sidney illustrates through a touching wartime scene depicting Duchin and a young Japanese boy finding common ground by sharing a moment at the piano). After returning from the war, Eddy's set his sights on being a real father to Peter, but he has to contend with his son only knowing him through his music, and the fact that he doesn't really know Peter at all. Factor in the boy's friend – the strong-willed, and quite lovely Chiquita Wynn (Victoria Shaw) – and the third act of 'The Eddy Duchin Story' is so packed with drama and characterization, it would make for a complete film nowadays.

Certainly one of the best examples of how to make a gorgeous melodrama, George Sidney not only puts a consistently luscious image on-screen, but he also manages to get a strong performance out of Power, who despite a convincing turn behind the ivories, was far from the swashbuckling roles he'd earned his fame from. Novak's smoldering allure would captivate audiences for different reasons two years later in Hitchcock's 'Vertigo,' but here, she imbues Marjorie with a motherly charm, well before becoming a mother turns out to be her character's last act on earth.

That sort of characterization puts this excessively weepy film in a special category; but, to its credit, 'The Eddy Duchin' story plays it straight, and never pretends to be anything other than the soupy little drama that it is. It may not be the way audiences today take their tearjerkers, but there's something refreshingly honest in the heavy-handed way this melodrama directs the audiences' emotions. In the end it's manipulation, but the kind the audience readily consents to that allows the movie to work as well as it does. 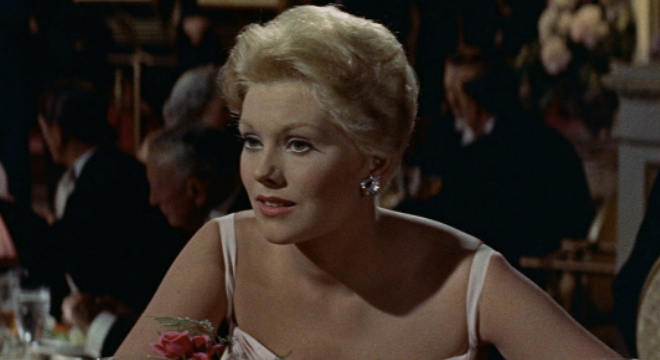 'The Eddy Duchin Story' comes from Twilight Time as one of 3,000 copies available to purchase. The 50GB Blu-ray disc comes in the standard keepcase, and is free of any previews prior to the top menu. The disc also comes with a booklet, which includes an essay written by film critic Julie Kirgo.

The 1080p AVC/MPEG-4 encoded image delivers 'The Eddy Duchin' story in all its CinemaScope glory and then some. The image looks fine (maybe a little bland) early on, but becomes better looking as the film progresses. Amazingly, there are very few instances where the film shows any adverse signs of aging, as it is free from significant scratches, dust, or other elements that might otherwise mar the film's presentation. Early on, the film looks somewhat dull and a touch flat, despite the presence of fine detail and some textural elements throughout. As things progress, the image seems to become more robust, offering deeper, richer Technicolor, better detail, and higher (but not perfect) contrast. Despite the blandness of the early portion of the film, there's really no other major fault with the image. When the age of the source in question is taken into consideration, it's really a marvel that it looks as good as it does.

Close ups provide a good amount of fine detail in facial features and clothing textures, while wider shots demonstrate the depth of he image and its quality in capturing a wide array of background elements, while maintaining their detail as well. Much of the image is brightly colored and after the first few minutes, these elements begin to show up more vividly and with greater separation. Contrast is good throughout, but it could be higher. Black levels often stop just short of being as full-bodied as they could be. They don't look bad, per se, but the gray can be noticeable at times.

Otherwise, this is an above average presentation that should be commended for being as clean and crisp as it is, whatever its other shortcomings. 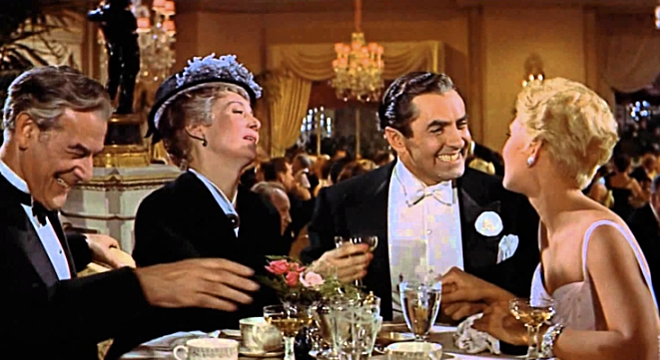 The DTS-HD Master Audio 2.0 track does a terrific job of presenting the musical aspects of the film with as much vigor as it does the sound effects and the dialogue. Actors' voices are all clean and easily heard, and the simple depth of the mix doesn't allow anything to be lost, even when Eddy is at the piano at home, or in front of a bustling audience with his full orchestra. In that regard, the musical selections of the film come out sounding top notch. There's absolutely no noise anywhere on the track, and it even manages to push certain elements much further than a mix this age might normally go.

The film honestly only has two major requirements when it comes to the audio, and it manages to deliver both with aplomb. 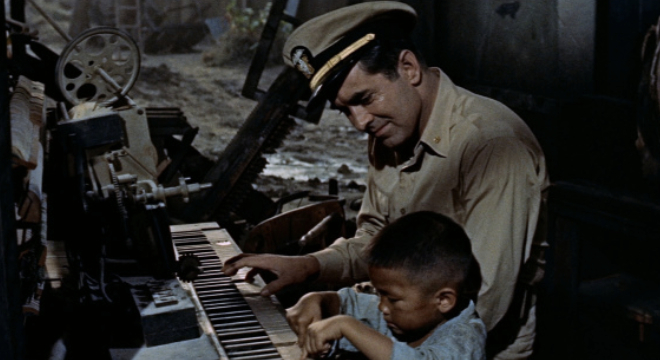 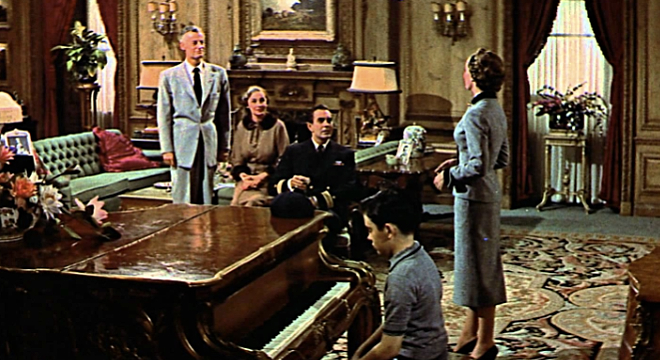 'The Eddy Duchin Story' is an entertaining glimpse at a kind of moviemaking that isn't done anymore. It is the sort of tearjerker that tells its audience upfront what to expect, and then delivers. But it's also a testament to the studio system of the 1950s, where no story was too small to be turned into a huge, lavish production. While this certainly won't fit the bill for everyone today, it is worth seeing for those who enjoy films of yesteryear, when earnestness was seen as an attribute, and not a drawback. Although there isn't much in the way of supplements, the above average image and terrific sound make this one recommended.