This effortlessly cool crime caper, directed by Georges Franju, is a marvel of dexterous plotting and visual invention. Conceived as an homage to Louis Feuillade’s 1916 cult silent serial of the same name, 'Judex' kicks off with the mysterious kidnapping of a corrupt banker by a shadowy crime fighter (American magician Channing Pollock) and spins out into a thrillingly complex web of deceptions. Combining stylish sixties modernism with silent-cinema touches and even a few unexpected sci-fi accents, 'Judex' is a delightful bit of pulp fiction and a testament to the art of illusion.

If Georges Franju's brilliant, hauntingly beautiful 'Eyes Without a Face' is the equivalent of a somnambulistic nightmare, then 'Judex' is nothing short of a pulp-inspired lucid dream. Fueled by the fantastical and the surreal, this 1963 film is based on a serial of the same name from director Louis Feuillade – the same man responsible for such works as 'Fantômas' and 'Les Vampires' – and follows the adventures of the eponymous avenger and his quest to undo the life of the vicious banker who had undone the life of his father. It is a crime story steeped in the world of pulp, one filled with wild masquerades, magicians, uncomplicated detectives, precocious children, daring circus performers, and, most importantly, dangerous, knife-wielding women in black tights.

As the story goes, Franju did not plan to work with the character Judex – he would have preferred to adapt 'Fantômas,' instead – but the film's co-writer, Jacques Champreux (Feuillade's grandson), approached him with the idea, which offered Franju the chance to work with material that had partially influenced him as a child; namely the films of the silent era. This allowed the director an opportunity to recreate the cinematic language of his youth in a then contemporary movie. To complete the visual tone, he and cinematographer Marcel Fratedal deliberately attempted to recreate the silent era through the use of filters, filming techniques, and especially intertitles to make 'Judex' look and feel like it was filmed decades earlier. 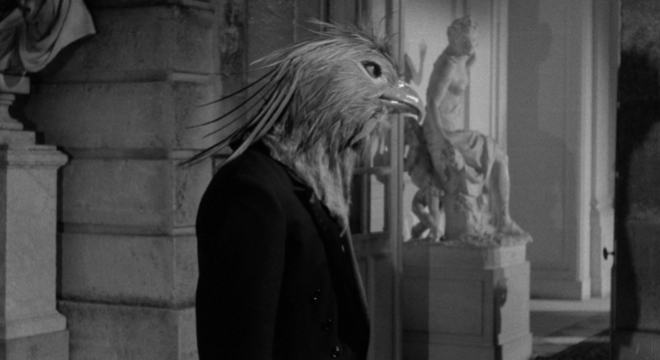 The original story of 'Judex' was often likened to 'The Count of Monte Cristo,' wherein a man concocts the role of Judex to seek revenge on the corrupt banker whose underhanded tactics led to the suicide of his father and subsequent ruin of his family. It was a fairly uncomplicated tale of revenge that lent itself quite well to the format of the serial. In Franju's hands, however, the story turns in a different direction, one that takes an almost meta approach to its pulp roots, pushing its titular hero (played by real-life magician Channing Pollock) to the background, to focus instead on Diana Monti (Francine Bergé), the seductive, cat-suit-wearing femme fatale. Here, even Judex's prey, the banker Favraux (Michel Vitold) is dispatched relatively early on, kidnapped by the hero during a surreal masquerade ball where the primary characters adorn striking bird masks. From there, the story splits its time between Judex's punishment of Favraux, and Diana's scheme to get a hold of the banker's vast fortune, which has been renounced by his daughter Jaqueline, played by Franju's ethereal muse, Edith Scob.

But the director never takes the audience into the inner workings of his characters. The psychic distance is quite extreme, to say the least, leaving the film's protagonists as enigmatic shells whose actions go largely unexplained, as do their almost random appearances that has everyone seemingly materialize at will. And such stylistic choices suggest that Franju was deliberately bordering on camp at times. This is especially evident as Diana's efforts are played deliciously evil in a one-note performance that is almost poetic in its heavy-handedness, while Pollock portrays the hero so straight he's all but a cipher.  That dearth of character allows the film to be wholeheartedly expressionistic, to play out as both homage and reinvention. It is pulp inspired by the opportunity to revel in and acknowledge its pulpy roots.

To that end, Franju evokes a style reminiscent of silent film that goes well beyond his choice to film in black-and-white and the use of intertitles. Exaggerated body language becomes an enormous part of Bergé's performance throughout, heightening the notion the film is actually revolving around her character. Meanwhile, Pollock and Scob are interestingly toned down for much of the film, inducing an emptiness that creates necessary intrigue around the magician's otherwise mundane chiseled features while also capitalizing greatly on Scob's delicate airiness. The combination of inflated and understated elements further stylizes 'Judex' in such a way that its characters become polar opposites. Judex is essentially a magical being, appearing to know all while revealing nothing (a true magician to the end), while Bergé, in her scheming and her agency reveals everything all the time. The dichotomy at play and the emphasis on the antagonistic nature of Diana hints at Franju's lack of interest in the pulpy hero, and his desire to uncover the truth of the situation, which, for him, seemed to be in the "evil" of Diana Morti.

And yet the pleasure of 'Judex' lies in its playfulness and surprising energy, which is perhaps best summed up during a scene late in the film wherein an eager young boy explains the film's plot to the equally eager but ineffectual detective Cocantin (Jacques Jouanneau) who was previously engrossed in none other than a 'Fantômas' novel. That nod to the story's pulp origins, then, becomes a palpable reminder of Franju's similar efforts to call to mind the silent era. But it also suggests the ways in which 'Judex' is as much a nostalgic pastiche of influences as it is a wholly original take on the expectations and conventions of a genre. 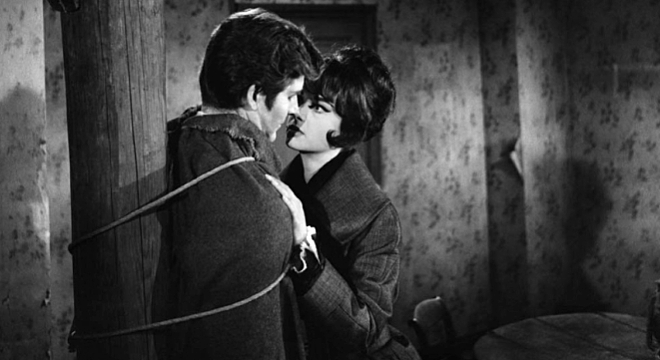 'Judex' comes from Criterion numbered 710 in the collection. This is a 50GB Blu-ray disc + 2-disc DVD set that also contains a very nice 36-page booklet featuring an essay by critic Geoffrey O'Brien and a selection of commentary by Franju himself.

'Judex' has been given a new 2K digital restoration that brings out a pleasing amount of detail that retains the visual qualities of the era in which it was shot while also playing up its silent-film aesthetics. Much of this comes through the consistent but welcome grain that is present in the image and actually grants it a sense of depth. That notion is furthered by the richness and consistency in the black, white, and gray tones throughout. Black levels are very strong, offering superb edges and a complete absence of crush or banding. The darkness of certain scenes increases the film's atmospheric quality, which is made even greater by the presence of some fine detail. Naturally, contrast remains consistent throughout, as pristine whites and a very rich grayscale match the aforementioned black levels quite nicely.

Of course, with this level of grain present, there is going to be some sacrifice in terms of super fine detail, which is evident in all but the close-ups. While this keeps the image from achieving a truly transcendent restoration in terms of fine detail, it isn't necessarily missed, as the importance here lies in maintaining the accuracy and intent of Franju's vision. Therefore, the cleaning that's been done to reduce dust particles, shake, and scratches will probably present itself as the most impressive feature of the restoration. There are a few segments where lines still appear, and there is a slight hint of screen flicker, but all in all, this is a very nice image that presents the film as it should be seen.

The LPCM Monaural track provides 'Judex' with a surprisingly deep and expressive soundtrack that delivers dialogue and music with equal quality. Characters are distinct and easy to hear, with tones that are sharp and help to highlight the individual qualities and tenor of the actor's voices. Dialogue is surprisingly well balanced with the film's music, which produced deep, rich, tones that shares space with voices and sound effects in such a way the end result is far more dynamic that would have been expected.

Like the image, the sound has been cleaned up, which means the dialogue never sounds tinny or hollow while the sound effects and music ring true without being marred by scratches, clicks, or other obtrusive elements. It is not a perfect mix, though, as there are some segments early on where the balance sounds a little off, or favoring of one voice or sound element over the other. This is quickly corrected, however, and the problem does not present itself as prominently again for the remainder of the film.

Overall, the sound quality here is quite nice and despite some of the limitations of the format and the track's age, 'Judex' is well represented in the audio category.

Francine Bergé (HD, 11 min.) - An interview with actor Francine Bergé who plays Diana 'Judex' was recorded in 2012 in Paris. She talks about how Channing Pollock was hired because he was a magician not an actor, and she then goes on to say that he was lost the entire time and no one could speak to him because he did not speak French. She also tells a charming anecdote about Edith Scob, as well as a fascinating description of how she wound up with the role of Diana in the first place.

Jacques Champreux (SD, 12 min.) – In this 2007 interview the co-writer of 'Judex' recalls collaborating with Georges Franju on the 1963 film. Champreux goes into a little detail that the original serial was directed by his grandfather Louis Feuillade. Apparently the director made it well known he wanted to be directing Fantomâs but no it was offering him a chance so he did 'Judex' instead.

Franju Le Visionnaire (SD, 50 min.) – This Is a 50-minute program that explores the singular work of Franju, featuring interviews with him and clips from some of his better-known films. The program was originally broadcast in 1998.

Le Grand Méliès (SD, 31 min.) - A 1952 short film that is a biographical movie about the cinematic illusionist George's Méliès. It featured his widow Jeanne d'Alcy as herself and their son André as his father. Fans of 'Hugo' will likely appreciate the train station setting and depiction of Méliès as a proprietor of a small toyshop.

Hôtel des Invalides (SD, 22 min.) – This is a short antiwar documentary from 1951 that sees Franju turn the camera on the famous 17th-century Parisian military complex of the title, which includes a hospital-turned-museum. Michel Simon narrates the film, which also features music from composer Maurice Jarre, and images by cinematographer Marcel Fradetal – both of whom worked on Judex.

Despite its inherent campiness and pulp sensibilities (which includes some unanticipated sci-fi qualities), 'Judex' is at its heart a revenge film that happens to push the both the apparent protagonist and his plot into the background, while focusing instead on the machinations of a delightfully evil femme fatale. Although the movie lacks the haunting atmosphere of 'Eyes Without a Face,' its adherence to older film techniques and conventions makes it something unique and deserving of an audience. The image and sound have been restored very nicely, and the special features will keep you busy for quite some time. This one comes highly recommended.

Sale Price 20.73
List Price 39.95
Buy Now
3rd Party 12.22
In Stock.
See what people are saying about this story or others
See Comments in Forum
Previous Next
Pre-Orders
Tomorrow's latest releases