Overview -
The nightmare begins when a group of young street racers take a desolate shortcut on their way to the Road Rally 1000. But a chance encounter with Rusty soon turns deadly as he stalks, taunts, and tortures his next victims with deranged delight. It’s a full-throttle, pedal-to-the-metal chill ride packed with killer twists and turns!
OVERALL
Skip It

As the title immediately makes known, 'Joy Ride 3: Road Kill' is the third installment to a horror movie franchise I had completely forgotten even existed. Heck, I barely recollect there was ever a first movie, let alone remember that it starred the late Paul Walker, Leelee Sobieski and Steve Zahn. I had to quickly Google it to refresh my memory, and discovered that the main villain, Rusty Nail (stuntman Ken Kirzinger taking over after Ted Levine established the persona), has yet to be given his own dedicated Wikipedia page, which pretty much tells us just how popular or memorable the road-rage killer really is. Of course, that little tidbit doesn't serve any other purpose than to satisfy my silly curiosity. On the other hand, it does make me wonder about the audience wanting the series to continue.

Anyhow, back to this third entry as part of a forgettable franchise that essentially steals from a variety of road pictures — probably most blatantly from Steven Spielberg's 'Duel.' To its misfortune, and for the rest of genre fans hungering for some fresh, creative and original meat, the same can be said of this ordinarily boring heap pilfered from various parts only capable of reaching top speeds of five miles per hour. Speaking of speed — no, not the drug, although the movie does open with a rather stupid scene involving crystal meth, attempted robbery and a trite addict couple — the plot's main crowd puller is basically outrunning a black Peterbilt,  which any soccer mom could easily shake off with a minivan packed with little pre-teen hooligans, a multitude of grocery bags and her secret stash of "medicinal" products she has to drop off before heading to the ice cream parlor.

After a wink-wink reference to the first movie, clearly meant for tickling the ribs of the five hardcore fans likely living alone in a dark, dank basement with nothing else better to do, the story jumps into high-gear with scenes of getting away from a semi-truck that's often seen hauling a nondescript trailer. Aside from letting the mind wander through an obstacle course of possible clever puns, I found myself constantly thinking what the deep-voiced maniac is transporting or whether he even has a job to begin with. Perhaps, this is his career choice — ridding our streets of idiot jerks behind the wheel of loudly screeching, obnoxiously gaudy cars. Wonder if there are special degrees offered only by a select few truck-driving schools: a PhD program on Fart-Can Eradication. Learn the proper methodology of wiping out annoying drivers and never get caught. 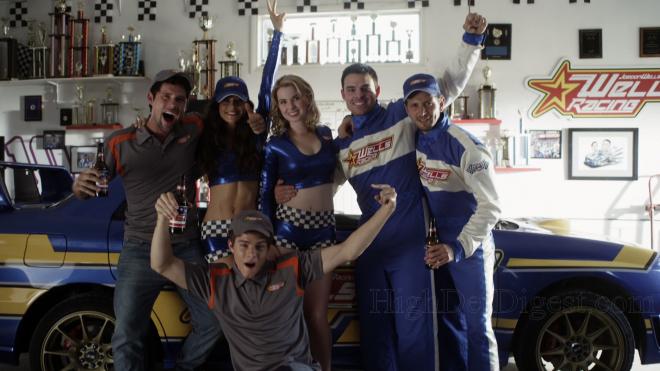 If you can't already tell, there's a tinge of truth masked beneath my ridiculously bad sense of humor. The film's killer is portrayed in a weirdly not-ironic heroic light because the kids targeted by Dr. Nail — as he is formally and professionally known after three movies and as a graduate of the prestigious Roadmaster Driving School — are absolutely insufferable dolts. The group, led mostly by hotheaded racer Jordan (a stilted, vacant Jesse Hutch), are on a cross-country road trip to a race in Canada (?) when miserly team manager Mickey (even more blank and ungainly Ben Hollingsworth) decides to rudely cutoff the wrong truck driver. The moment things obviously are not boding well for our ensemble of harum-scarum schmucks, the only person with brains is Jewel (Kirsten Prout), who's role sadly could have been played by a Popsicle stick with jiggly eyes. Perhaps even better because then audiences could be distracted from the inanity.

In spite of a good amount of on-screen gore — tastefully done (depending on your definition) thanks to practical effects rather than CGI — 'Joy Ride 3: Road Kill' is a joyless outing through a backwoods road with a killer that's oddly likeable and at the same time as exciting as hoop rolling. Then again, the latter would actually be more fun than watching annoying characters stupidly and miserably failing to outrun a semi-truck on an open, reportedly unpoliced long stretch of road. There's absolutely nothing terrifying or thrilling about this concept — a nightmare only because of how horrifyingly dull the idea actually is. Director Declan O'Brien, who's done better work in the 'Wrong Turn' series but whose claim to fame is 'Sharktopus' and the jaw-dropping bad 'Rock Monster,' delivers another pile of bad filmmaking that ultimately feels like a rotting carcass on the side of the road: so sad at first, but soon forgotten about a mile later.

20th Century Fox Home Entertainment brings 'Joy Ride 3: Road Kill' to Blu-ray as a two-disc combo pack with a flyer for a Digital HD Copy. The Region Free, BD25 disc sits comfortably opposite a DVD-9 inside a blue, cutout case. After several skippable trailers, viewers are taken to the standard menu screen with the usual options, full-motion clips and music.

'Joy Ride 3' takes Blu-ray out for a spin on a superb, top-notch 1080p/AVC MPEG-4 encode. Although the picture has that digital, made-for-TV look that's pretty bland and unattractive, the cinematography of Michael Marshall is excellently reproduced here, showing rich, inky blacks with strong shadow delineation. There's a bit of visible crush in several nighttime scenes and highlights tend to run somewhat hot, creating a tad of posterization, but overall, the 1.78:1 image is very well-balanced with comfortably bright contrast and good dimensionality. Bold, animated colors keep the video lively, and flesh tones appear healthy with exceptional, revealing textures during close-ups. Fine lines in a few sequences are not very resolute, but all in all, details and objects are razor-sharp and distinct, making the presentation quite impressive.

The third installment revs up the screen with a satisfying and effective DTS-HD Master Audio soundtrack. Although it has a front-heavy design with the majority of the action taking place in the soundstage, the rears are occasionally employed for generating ambience and delivering a few choice effects with believable directionality that nicely enhances the soundfield. Panning is quite impressive, particularly in the front three-channels where objects move from one side of the room to the other with ease and distinct clarity. The mid-range is sharp and detailed, allowing the high-pitched screams and the instrumentation in the music to remain crystal-clear throughout. Meanwhile, a powerful low-end provides palpable weight, and dialogue is precise and pristine in the center.

Pretty dull and ultimately forgettable, 'Joy Ride 3: Road Kill' is the latest installment to a horror franchise that gets my vote for one of the dumbest concepts of the genre. All the characters need to do is outrun a semi-truck hauling a trailer, yet that seems to be an impossible task for a racing team! The Blu-ray arrives with an excellent picture quality and a surprisingly good audio presentation, but the supplements are rather light and not particularly interesting. The overall package is essentially a sad case of good disc, bad flick!

Sale Price 10.99
Buy Now
3rd Party 18.49
In Stock.
See what people are saying about this story or others
See Comments in Forum
Previous Next
Pre-Orders
Tomorrow's latest releases