True story of a British soldier (David Thewlis), who is left behind in the Falklands after the war with Argentina. He travels on a journey from the Falkland Islands, to his army barracks in England where he is severely beaten and ostracized by his fellow soldiers.

As a director, Paul Greengrass has developed into something of a hit maker. And although he has received plenty of critical acclaim and commercial success for his films that strive to achieve a certain level of authenticity, whether they are depicting the harrowing journey of 'United 93,' the everything-is-a-weapon fighting style of Jason Bourne in 'The Bourne Supremacy' and 'The Bourne Ultimatum,' or capturing the tense standoff at sea in 'Captain Phillips,' there are those who aren't as thrilled with the director's now-signature filmmaking style. But realism through a sometimes-reviled shaky cam style wasn't always Greengrass' go-to move; it was something he developed over time. And that fact alone makes the re-release of his first feature film, 'Resurrected,' all the more interesting to watch – if for nothing else, it offers viewers a chance to track the development of a worthwhile filmmaker from a time when he was clearly still trying to figure out what his style was.

The 1989 film is based on a true story of a young British soldier who went missing near the end of the Falklands War and was even declared dead, only to turn up alive and more or less well, after spending 48 days in a shed, surviving off of earthworms and oysters. Despite this being his first film, certain aspects of Greengrass' visual style are present early on. The film begins with the funeral of the soldier in question, Kevin Deakin (David Thewlis), which appears to be attended by nearly everyone in his small rural village. The church is packed with mourners who, even though next to nothing has been said, Greengrass makes it apparent through the camera's slow crawl through those in attendance and its eventual halt on the demonstrably mournful face of his mother and father that this is an intimate group of people.

The documentary-like approach to the opening of the film skillfully eschews the need for exposition, which is instead delivered through scenes depicting Kevin's return to civilization being interwoven into the opening segment. While this may have been a function of the screenplay by Martin Allen, Greengrass demonstrates an intuitive sense of pacing that establishes the circumstances of the narrative early on, so that the character of Kevin and the truth behind his story of being lost behind enemy lines can be more fully explored. 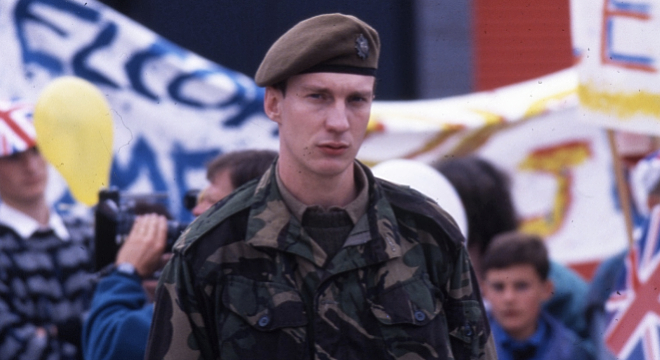 From there, Greengrass takes the soldier home, so that he can be reunited with his family and girlfriend. A pre-'Prime Suspect' Tom Bell takes on the role of Deakin family patriarch, who is as eager to have his son returned, as he is to have a hero in the family. But the pleasant, celebratory homecoming is short lived, as questions of Kevin being a deserter plague him wherever he goes, and symptoms of PTSD begin to torment his mind. After a brief respite, the young soldier is off leave and ready to finish his tour of duty. But the stigma of being branded a coward and a deserter follow him back to base, where he is tormented, harassed, and bullied by Slaven (Christopher Fulford), a fellow soldier also battling PTSD demons.

Greengrass has essentially assembled two films in one – a story about the emotional cost of war and one that serves as an indictment on accepted levels bullying in the military – and although both have their moments, thanks in large part to Thewlis turning in a terrific, mostly understated performance, there are times when the nascent talents of both men work against them and the film itself. Greengrass is given to some overwrought elements in his depiction of war, where the heavy-handedness tends to undercut the emotional intensity of the situation. The flashbacks to Kevin's experiences in battle may have been better served had they focused on his time in the shed – which the script keeps unseen in an effort to build some kind of tension around the expectation of a dramatic reveal late in the film.

And yet, with its shifting focus toward the harassment and maltreatment Kevin has to endure, it becomes a moot point whether he actually can't remember what happened to him for 48 days or not. His supposed lie, at this point, is actually inconsequential, as his torture is going to happen either way – his tormentors (including a corporal) have already made their minds up. So, the inclusion of the war sequences actually wind up being equally inconsequential, and the film, as a whole suffers from the changing concentration and the unnecessary importance that is placed on the horrors of battle.

Still, being able to look back at the budding talents of both director and star is something of a treat. Thewlis is remarkable for much of the film, while Greengrass demonstrates an exciting kind of raw exuberance as a filmmaker that becomes more considerable after this film is weighed against his later efforts. Even though 'Resurrected' is something of a melodramatic affair, it never fails to take an intelligent, occasionally provocative approach to the disturbing detriment of war and how the powers that be can sometimes turn a blind eye to the harassment of soldiers by their peers. 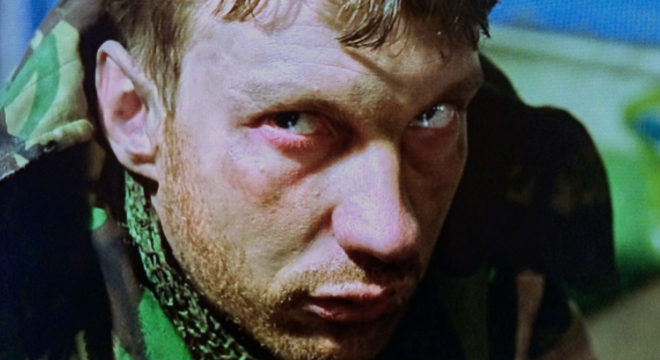 'Resurrected' comes from Twilight Time as one of 3,000 copies. It is a single 50GB Blu-ray disc that comes in the standard keepcase. Like all Twilight Time releases, this comes with a booklet featuring an essay by film critic and historian Julie Kirgo.

The 1080p AVC/MPEG-4 encoded transfer does the best that it can with the image, and manages in many spots to create a detailed image. For the most part, the image looks far more dated than being made in 1989. Many shots have a soft focus to them, which limits the amount of fine detail present in facial features and textural elements. Although the film demonstrates an impressive level of depth, it is largely undone by the lack of clarity in the overall image. Close ups feature the highest level of detail, and even then it's not great. Colors are severely muted throughout, so that everything has a drab gray or militaristic quality to it, which seems deliberate given the subject matter. Still, reds can tend to look somewhat brown, while whites seem off as well. Contrast is relatively higher on the black side of things, as shadows and darker elements appear more full-bodied and even than their whiter counterparts, which can sometimes look overblown during the daytime sequences.

Overall, this is a somewhat middling image that occasionally shines, but rarely rises above being average.

The DTS-HD Master Audio 2.0 track offer a mostly flat, featureless listening experience that presents much of the dialogue at a lower than expected level. There's not much in the way of high expectations with the sound here, but the levels of basic elements seem to be slightly out of whack. They're not terrible by any means, just not as good as other Twilight Time releases. Actor's voices can be difficult to hear at times, and when they are in the presence of sound effects or music, they tend to be easily overwhelmed. In that regard, the sound effects do manage to come through with some resonance, but that is primarily during the short battle sequences, where explosions ring out, while the score is particularly noticeable.

There is still a lack of atmosphere throughout. The sound often comes across as unexciting and it sometimes is free of immersive qualities at all. There are limits to what at 2.0 mix can do, but they are far from what the sound here is even willing to attempt. Again, it's not a complete disaster, but this mix will leave you wanting more.

Paul Greengrass on 'Resurrected (SD, 18 min.) – Greengrass gives a very candid interview in which he discusses the various things he did not know as a young director, and his thoughts on the film now.

David Thewlis on 'Resurrected (SD, 16 min.) – Thewlis gives a very animated interview in which he delights in telling anecdotes from filming, while reflecting on his career since.

'Resurrected' is required viewing for anyone who is a fan of Paul Greengrass' work, but it is also worth seeing for those who are merely curious to see two young, talented individuals at work in the early part of their career. While the film struggles with its focus, and sometimes goes too far in areas undeserving of its attention, there is enough in terms of storytelling, acting, and directing to make this worth a look.