Overview - An unstable dad who after getting out of a mental institution tries to convince his daughter that there's Spanish gold buried somewhere under suburbia.
OVERALL
Worth a Look

One of the joys of reviewing movies on video is getting the chance to discover diamonds in the rough -- the "small" movies that play for a weekend in two art theaters in Peoria, and that I would never have heard of otherwise. "Small" doesn't mean "insignificant," and it certainly doesn't mean "unworthy." 'The King of California' is just such a find, a film that barely registered a blip on the mainstream radar, but is nevertheless a vibrant picture, brimming with interesting ideas and filmmaking passion. It's hardly a perfect film (far from it), but sometimes the best buried treasure is the kind you have to dig a little deeper through the muck to appreciate.

The metaphor is apt, since 'The King of California' is about the search for gold -- Spanish gold to be exact, hidden somewhere in the bowels of suburban America. Meet Charlie (Michael Douglas), a certifiable nutjob, who spent a two-year stint in the loony bin pouring over the journals and letters of a 17th century Spanish conquistador, and has subsequently convinced himself that a long-lost fortune now resides in the heart of California. The only problem is that the mountains of the 17th century have now been replaced by condos and strip malls. What's a modern adventurer like Charlie to do when he knows the treasure is buried right under the toy aisle of the local Costco?

That's where Miranda (Evan Rachel Wood) comes in. The 16 year-old daughter that Charlie has for all intents and purposes abandoned over the last decade, she's barely been able to scrape together a meager existence for herself while fooling her family and the authorities, who don't realize that she's really living on her own. Charlie quickly barges back into her life (spent largely working round-the-clock at McDonald's for minimum wage) with his crazy ideas of a pot of gold at the end of the rainbow. Despite her initial reluctance, Miranda is eventually pulled into his scheme, as is a local two-bit criminal named Pepper (Willis Burks II). Together, and against all rationality, they'll search for gold in them thar hills, and what they discover won't exactly be what they think they’re looking for.

'The King of California' is a movie that could easily have lapsed into insufferable quirkiness, but writer-director Mike Cahill refreshingly resists most of the urges that often befall "indie" filmmakers. Thus, there is no hip emo soundtrack, no too-cool-for-school dialogue, no cold irony substituting for emotional engagement. Aided only by the fine work of his director of photography Jim Whitaker, Cahill moves his camera fluidly but simply, avoiding flashy distraction to instead engage his characters with earnest directness. By actually taking his story seriously (however delirious his main character may be), Cahill is able to dig deep and unearth beauty in his suburban Americana milieu that's actually sublime.

It helps that 'King of California' contains what is easily Douglas' best performance in recent memory, especially given his career descent as of late with a series of forgettable studio pictures ('The In-Laws,' 'The Sentinel,' 'You, Me & Dupree'). Here, he mixes the scrappy, craggled charm he displayed in 'Wonder Boys' with the commanding charisma of Gordan Gekko in 'Wall Street,' while perfectly nailing the refusal of conventional reality that is so common with mentally-unbalanced people like Charlie. Douglas brings a strange kind of logic to Charlie's crazy quest, allowing us to believe that Miranda could so easily fall back under his spell. The effervescent Wood holds her own with Douglas, and finds just the right combination of adult-like cynicism and youthful optimism to make Miranda a three-dimensional character, rather than a reactive foil for Charlie's impulsive insanity. Along with recent roles in such films as 'Thirteen' and 'Across the Universe,' Wood is really starting to prove herself as a young actress to watch.

Unfortunately, 'The King of California' does falter somewhat in the final stretch, as Cahill never quite resolves his themes to say anything particularly profound about Charlie's quest for authenticity in a world of banal surfaces, nor is the emotional reconciliation between Charlie and Miranda as moving as it could have been. As a whole, the film comes to slightly less than the sum of its parts, ultimately making 'King of California' a movie of small pleasures. Yet for me, that was still enough -- with today's mainstream cinema so determined to bamboozle us with flashy visuals and non-stop noise, I welcomed the chance to take an unusual journey with a most unusual character, and in the process, share the vision of a filmmaker who understands the concept of understatement. 'The King of California' is a strange trip, but for the adventurous film buff, it’s one worth taking. 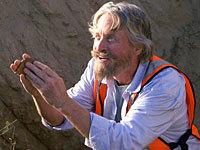 'The King of California' is presented in a 1080p/VC-1 encode, which is identical across the Blu-ray and HD DVD versions (both of which are hitting shelves day-and-date with the standard-def DVD). For a modest, visually direct picture, 'The King of California' looks quite nice in high-def, with a very bright and appealing image.

Much of the film takes place in sun-baked exteriors, which come across here with nice clarity, depth and detail. I was surprise at how readily visible fine textures are, especially in close-ups. Colors are not extraordinarily vivid, but they are well saturated and cleanly rendered. Fleshtones are accurate as well. The source is also pristine as you'd expect for a new release, and grain is present but not excessive, making for a very film-like picture. Unfortunately, the transfer is a tad too sharp, with some edginess present, and I also noticed occasional jaggies on slow pans and the like. Otherwise, this is a very nice presentation that exceeded my expectations.

First Look serves up three audio options for 'The King of California' (identical to both the Blu-ray and HD DVD) -- DTS 5.1 Surround (768kbps), Dolby Digital 5.1 Surround (640kbps, and mislabeled as Dolby Digital-Plus on the box) and Dolby Digital 2.0 Stereo (192kbps), all in English. No, there are no lossless audio on the disc, but given the low-key nature of the film it's really not a detriment.

The sound design of 'The King of California' is pretty nondescript -- the film is almost wholly dialogue-driven, so don't expect much discrete action. There are but a few minor (if well placed) rear effects, and minimal atmosphere and score bleed. But for what it is, this is a perfectly competent presentation. Dialogue sounds clear and natural, and it's well rooted in the center channel. There is a nice amount of spread of effects and score across the front soundstage, and dynamic range is full-bodied. The source also has no defects or irritants, such as overly-bright highs, while dialogue is well balanced and intelligible. 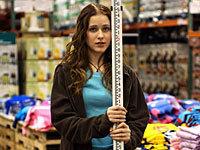 'The King of California' enjoys a supplemental package on high-def that matches the standard DVD version. It's not a particularly robust assortment of extras, but the superior audio commentary is certainly a highlight. None of the video-based extras are presented in high-definition (aside from the theatrical trailers), nor are there any subtitles provided.

'The King of California' is a quirky and appealing -- if slight -- comedy, the kind that usually doesn't get a theatrical release these days (which may explain its weak box office and speedy trip to video). The presence of Michael Douglas and Evan Rachel Wood elevate the the material considerably, however, and it's worth a look for fans of the idiosyncratic. This is a nice Blu-ray release, too, with very solid video and audio, and a noteworthy audio commentary. If you're in the mood for something different, 'The King of California' is worth a look.

Sale Price 22.99
Buy Now
3rd Party 9.91
In Stock.
See what people are saying about this story or others
See Comments in Forum
Previous Next
Pre-Orders
Tomorrow's latest releases