The US Army is under pressure from the desperate relatives of white prisoners of the Comanches to secure their rescue. A cynical and corrupt marshal, Guthrie McCabe, is persuaded by an army lieutenant to assist in the negotiations with the Comanches. However, just two captives are released; and their reintegration into white society proves highly problematic.

Although debatable, 'Two Rode Together' is, on the whole, one of John Ford's lesser talked about and remembered westerns. It is probably best described as a minor classic in the legendary filmmaker's oeuvre. The highly-admired director of such revered classics as 'Stagecoach,' 'The Grapes of Wrath,' 'My Darling Clementine' and 'How Green Was My Valley' is also famously known for disapproving of this rather stoic and surprisingly grave motion picture. At one point, he's been quoted as outright calling the adaptation of Will Cook's Comanche Captives "crap." Legend goes that he only decided to make the picture after the death of president of Columbia Pictures Harry Cohn, whom he apparently respected, which was a rare acknowledgement from a man who is also famously known for being a difficult man to work with.

Unfortunately, the film comes with a somewhat dispassionate, almost detached feel throughout. It stands out amongst Ford's other pictures because it noticeably lacks the same sense of grandeur seen in his other westerns. Missing are the extreme long shots which transform dry desert sceneries into stunning, majestic panoramic landscapes, making otherwise lifeless settings crowded with immense beauty and wonder. We're also lacking those picturesque shots of the characters, either in close-up or from a short distance, which leave audiences pondering on their meaning and significance to the overall narrative. And in spite of Charles Lawton, Jr's strong and wonderful cinematography, giving Frank Nugent's stern story little spurts of color and life, the movie largely feels barren, lackluster and pretty much spiritless.

Then again, and with that in mind, it could be argued that Ford's sentiments towards the production and the way he chose to make it actually works to the film's advantage. This is especially true when considering the plot, which funny enough is also another reason Ford disliked it. It is much too similar to the director's masterpiece 'The Searchers,' following a pair of opposite but determined personalities into Comanche territory to retrieve white prisoners who have been held captive for seven years. The major difference is that Jimmy Stewart's Marshal McCabe and Richard Widmark's Lt. Jim Gary have no personal stake in the situation, unlike John Wayne's obsessive Ethan. The two men, who are friends from years earlier, are forced to work together by frantic relatives and find in honor in their actions through the course of the narrative. 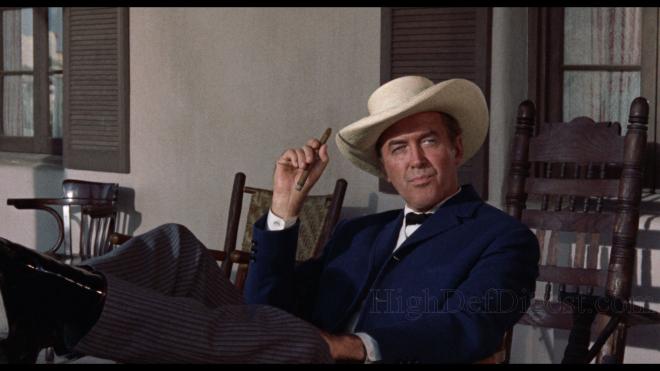 Similarities aside, which are very much justified, the film still stands on its own, worthy of consideration and attention from genre fans. It is telling of a growing trend within westerns to look at the uniquely American period with more critical eyes, which interestingly Ford essentially ushered in with his celebrated magnum opus and later restyled by revisionist filmmaker Sam Peckinpah and the Italian western as a whole. The plot's subject matter is quite dark and bleak, dealing with issues of the fear of racial and cultural indoctrination. Stewart's McCabe is the only person to admit the mission is a lost cost and doesn't hesitate for a second to hit the poor distraught relatives with the truth. With hints of Rooster Cogburn's bitterness, although years before Charles Portis's novel, Stewart delivers a commanding performance os a man soured by the lawlessness of the west, content with lounging away his life in a quiet town receiving ten percent of the profits from local businesses.

As the story progresses and the people, particularly Widmark's rather naïve soldier, slowly realize what McCabe already knew, the plot grows increasingly somber and admirably shrewd. This is where Ford's distant camerawork is a benefit to 'Two Rode Together,' turning the presumed savagery of the Comanche people comparable to the dismally grim attitude of the captives' relatives. The end of the film — the last half hour or so — is ultimately what makes it a worthy watch because it's such a unexpected twist to everything that comes before it that it is surprisingly shocking and a heartbreaking revelation for Shirley Jones's character. Years later, Ford would go even darker and more serious with 'The Man Who Shot Liberty Valance' and 'Cheyenne Autumn,' but fans of the director and the genre as a whole should give this minor classic a watch.

John Ford's 'Two Rode Together' comes to Blu-ray as a Limited Edition release courtesy of Twilight Time. The Region Free, BD50 disc is housed in the standard blue keepcase accompanied by an eight-page booklet with a thoughtful essay written by screenwriter Julie Kirgo. At startup, the disc goes straight to a static menu with the usual options.

As a second tier distributor, Twilight Time must rely on the elements offered by the original owners, which in this instance is Columbia Pictures. Thankfully, the source appears to be in excellent condition, and Twilight has done a great job of cleaning the material for the best possible presentation, which is a significant upgrade to the many previous home video editions.

The 1080p/AVC MPEG-4 encode shows bold, full-bodied primaries with warm, animated secondary hues. Contrast is well-balanced and consistent for the most part with only a few slightly dull moments although whites remain clean and crisp throughout. Definition and resolution noticeably waver with the weaker scenes looking pretty average and soft. However, the 1.85:1 image is quite attractive overall with good detailing, revealing facial complexions and awash with a thin layer of grain. Blacks tend to come off a bit strong with shadows ruining finer details in several spots, but in general, levels are accurate, giving fans a nice high-def transfer.

The minor Ford classic rides onto Blu-ray with a slightly better audio presentation, which is also subject to the condition of the elements. Like the video, thankfully, the source is in great shape, and Twilight has done an excellent job in providing the best possible DTS-HD Master Audio mono soundtrack. Dialogue is crystal-clear and precise in the center, allowing for the slightest tonal changes in the performances to be loud and clear. Although imaging isn't particularly wide, lacking a tad of presence during the few action sequences, the soundstage still impresses with strong acoustical details and a sharp mid-range that never falters. With that said, however, the music and action still feels somewhat narrow and a bit restrained in the middle. Luckily, a healthy low-end saves the day, providing some weight and depth to the music, making this a very nice and welcomed lossless mix overall.

Starring James Stewart and Richard Widmark, 'Two Rode Together' is a less talked about minor classic in John Ford's oeuvre. Nevertheless, it is an excellent motion picture from the legendary director dealing with some rather serious and somber themes that make it worth watching. The Blu-ray from Twilight Time arrives with very good picture quality and slightly better audio. Although supplements are sadly slim, fans of the director and the genre should check it out.