Football hooligans organize themselves into firms that represent their favorite team.

One of the many pitfalls for filmmakers attempting to depict a particular decade or era is that the film will become too focused on the details of the period, or the irrelevant minutia that makes for terrific nostalgia but ultimately distracts from the narrative at hand. And when that level of distraction is combined with the problems and concerns inherent in any remake, the new iteration may feel pressured to outdo the evocative symbols and musical cues that came so naturally the first time around. This is essentially the problem facing Nick Love's 2009 remake of 'The Firm,' based on the 1989 Gary Oldman-starring episode of 'Screen Two' that was directed by Alan Clarke.

This is the story of rival "firms" of football (fútbol, soccer, what have you) fans who express their fandom through acts of brutal violence against one another, which, as the film depicts has practically devolved into a cohort of criminal syndicates. It's not altogether unlike Lexi Alexander's 2005 film 'Green Street Hooligans,' where loyalty to one's club can lead to the kind of devotion that inevitably ends a young man's life. Here, the story revolves around Dom (Callum MacNab), a working-class teen who, after a chance encounter with the notorious Bex (Paul Anderson), begins walking a fine line between admiration and worship, as he attempts to first ingratiate himself with the violent hooligan and his firm, and then through outright mimicry of his newfound idol.

MacNab plays Dom with the sort of juvenility one would expect of a teenager: he's taken by Bex's outward displays of power and authority, which are usually handled through head butting, kicking, and punching. Early on, it seems like Dom is deliberately intended to be a cipher, a hollow, amorphous individual, being molded by the last person on the planet who should be shaping young people. Although it's never made completely overt, the relationship is at least partially reciprocal: Bex finds himself enjoying the company of a teenager who unabashedly dresses in the same trademark Fila tracksuits and spends his father's hard-earned money on the same kind of sneakers his new hero wears. 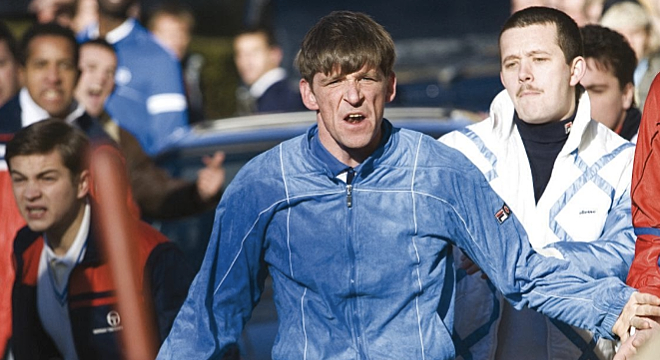 Love sets the relationship up early on with a mentor-mentee dynamic but due to the way the screenplay never establishes a clear sense of motivation in either character, the reasoning for their bonding is soon blurred, sometimes veering into ambiguous and unresolved questions of sexuality or interest of a more prurient nature. While this may have not been the original intent, it speaks to both the undercooked nature of Love's script, and how an inadvertent read creates a deeper, more fascinating arc than what either protagonist wound up with on-screen. For Dom – like Love – the interest is primarily in presentation, style, and fashion, as the camera lingers on Bex's brightly colored tracksuits with even greater fetishistic intensity than when the violence erupts as two firms converge on one another.

Clothes become a major component to the rest of the movie – and not just because the film rarely manages to dig much deeper into any character than what is on the surface. To Love, those tracksuits become the only insight into Bex and his sense of identity, which Anderson conveys when juxtaposing the character against his dual personas. When the film shows Bex at his day job – selling real estate – hints of the track-suited thug are roiling under the suit and tie; he's all feral intensity, like a caged animal waiting for a chance to run wild and sink its teeth into some prey. But while that depiction helps make Bex more interesting than a standard sociopath, the fact still remains that he, like Dom (or anyone else for that matter), lacks a clear objective or goal, making it difficult to ascertain what, precisely, either character's arc is, and why any of what he's doing matters.

To reconcile this, 'The Firm' inserts the demonic Daniel Mays as Yeti, the leader of a rival firm with whom Bex shares a long, sordid history. Like so many other aspects of this film, there is an interesting relationship between the two men that sadly goes underutilized. Early on, Bex and Yeti converse on the phone in such a way that one would never know their murderous intentions for one another. They share a tenuous respect that is only possible through their shared involvement in decidedly anti-social behavior that, as the film progresses, becomes more and more antagonistic, between the two men.

However, Love avoids any real exploration of their connection much less the reasons behind their devotion to such a fringe group. Like Dom's interest in Bex, the reason for Bex and Yeti's involvement in his respective firms is only obliquely referenced through each man's apparent love for violence. Or at least that's as far as the movie is willing to go in its exploration of aggression and dominance as proof of masculinity, and the reasons young men feel compelled to express themselves through such harmful, rebellious means.

To that end, Love takes a fly-on-the-wall approach, one that eschews a strict narrative for a collection of scenes and incidents that are intended to depict what membership in a firm entails. And yet, Love's screenplay and directorial choices leave 'The Firm' and the characters within feeling as undefined as what these groups are actually fighting over. While there are ways of dissecting the use of violence for the sake of violence, or making unmotivated anti-social behavior a compelling part of a narrative about the base needs of masculinity, there's nothing here to suggest that is what the director intended.

Love is instead content to deliver the story as a series of loosely interconnected scenes depicting various aspects of the group's loyalty and inner-workings, while avoiding much in the way of an actual plot. That sense of drifting aim asks the question: What purpose does Dom ultimately serve? His character has only the slightest hint of an actual arc, as he drops his old friends for new ones, becomes more of an insufferable prat, sees and partakes in unspeakable acts of violence, and then is left wanting. There's no real turning point for him – which, again, could be compelling if it the film could convincingly say that was its intention – so even his role as proxy for the audience feels underwhelming.

Ultimately, aside from Anderson and Yates' spot-on performances, all that really rings true are the period-specific fashions and the overabundant musical cues. It's just too bad Love couldn’t find a way to make those elements into something more than surface level reminders or call backs to a bygone era. As it stands, 'The Firm' is content to keep the audience focused solely on the superficial, things like tracksuits and big hair and '80s tunes. In that sense the movie is a lot like the brouhahas between the firms depicted therein: a lot of commotion for no discernable purpose. 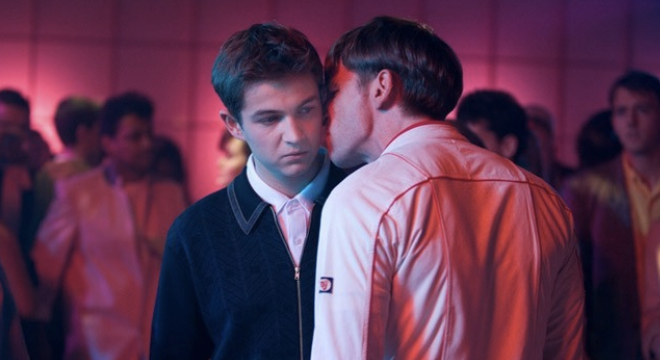 'The Firm' comes from Twilight Time as one of 3,000 limited editions. It is a single 50GB disc in the standard keepcase, and, as usual it comes with a booklet featuring an essay by film critic and historian Julie Kirgo.

Having been released in 2009, 'The Firm's' 1080p AVC/MPEG-4 encoded transfer looks as good as you might expect, despite a handful of issues with soft focus and some scenes that seem to have the white levels deliberately blown out. All in all, though, this is a nice looking image that comes complete with the expected positives like fine detail, good color, and, for the most part, high levels of contrast when they're needed the most.

Although fine detail is high throughout, there is a noticeable difference depending on how close the camera is and the level of movement that is necessary in the scene. To that end, static moments seem to deliver the greatest amount of fine detail in facial features and clothing textures, while background detail is seen occasionally as the film uses depth of field to good effect throughout. Color plays a huge role in the film, and the image does a terrific job playing that up. Bex and Dom's tracksuits practically jump off the screen, especially when they're wearing something in primary colors (i.e. red or blue).

While indoor and evening scenes demonstrate the image's high level of contrast, producing deep, inky blacks that are mostly free of banding and totally free of crush, the outdoor sequences appear to run hotter than usual, and deliberately so. The impact of these hotter moments is more subjective and will either go completely unnoticed or be a total distraction. Either way, at least the effect doesn't distort the fine detail too much.

The film also comes with a DTS-HD Master Audio 5.1 mix that delivers nicely balanced sound and utilizes the full dynamic range to engaging ends. The dialogue is very easily heard but probably not easily understood by everyone, as the slang can be nearly indecipherable at times. Sound effects resonate nicely and are spread out among the various channels to give the mix a deep, richly immersive sound. Atmosphere plays a huge part during the crowded brawls between the two firms and the mix handles all the various elements with great aplomb. The scenes sound busy and hectic but still precise, and imaging and directionality play an enormous role in making it all seem realistic and of the moment.

Meanwhile, the robust soundtrack sounds incredible, as the songs are given a chance to shine on the lossless audio track. Each entry is delivered powerfully through almost every channel, with the occasional LFE flourish to deepen the experience. Here again, balance plays an enormous role as the music, powerful though it is, always makes room for dialogue and sound effects when necessary. Overall, this is a very nice sounding mix.

Audio Commentary with Director Nick Love – This commentary also features some of the producers on the film, who are clearly friends with Love. The trio talks about the difficulties of filming as much as they do anecdotes about particular scenes and actors. After a while, it begins to sound a bit like a boy's club, and there're a few moments when Love makes some comments that seem so unnecessarily derogatory and sure to offend someone, it's almost like he's doing an interview for Playboy.

Making of The Firm (SD, 23 min.) – An in-depth behind-the-scenes look at the film. It features interviews with the filmmakers and some location shooting as well.

Deleted and Alternate Scenes (SD, 6 min.) – This is just a handful of extra scenes, some of which are completely new but ultimately discarded, while others will be lengthier versions of those already in the final cut.

Anatomy of the Fight (SD, 7 min.) – This is another behind-the-scenes look at how the director and coordinators handled the massive brawls.

'The Firm' does a tremendous job in evoking the feeling of an era – in this case the '80s – but little emphasis is given to the characters, their motivations, and even their role in the overall plot. In the end, Nick Love's movie is entertaining, but empty; it lacks both a true narrative push and compelling characters – even though Anderson and Yates turn in stellar performances. If it had been as concerned with demonstrating the same level significance to the characters and what they were doing, as it did the way everything looked and sounded, the film might have been a home run. Still, with a good image, great sound, and some decent extras, this one is definitely worth a look.