A man wakes up in a pit of dead bodies with no memory of who he is or how he got there. Fleeing the scene, he breaks into a nearby house and is met at gunpoint by a group of terrified strangers, all suffering from memory loss. Suspicion gives away to violence as the group starts to piece together clues about their identities, but when they uncover a threat that's more vicious and hungry than each other, they are forced to figure out what brought them all together, before it's too late.

A complicated story that pits characters against character, Open Grave examines how important memory is to a person's identity by forcing six strangers -- stripped of all recollection -- to confront their inner demons. While these strangers seek to identify their past, evil demons lurk beneath them, leaving them to fight for survival, even if it means betraying their allies.

Although the story of 'Open Grave' – the mystery thriller starring Sharlto Copley of 'District 9' fame – has almost nothing in common with 'The Colony' – the Laurence Fishburne-starring sci-fi flick from 2013 – they both share one very important characteristic: Both films start out with fairly engaging ideas and a tremendous amount of potential that is ultimately squandered through incredibly poor execution and sloppy, half-baked storytelling.

'Open Grave' begins with the tantalizing premise of a man (Copley) waking up in a pit full of dead bodies, having no knowledge of who he is or how he got there. In essence, it's a lot like asking: what if 'The Hangover' had deliberately meant to be as solemn and unfunny as it actually was?  In fact, from the look of things, those first moments paint a picture suggesting Copley could have been a part of some particularly exuberant carousing, as though the scene unfolding before his and the audience's eyes was just the aftermath of some Burning Man-like festival. The major difference being, the character in this particular situation actually seems to care as to whether or not he's responsible for the carnage he's currently neck deep in.

So right away – mostly from Copley's expression of shock and horror – the movie makes it clear that the circumstances of the pit are the result of something truly horrific. After a rope is thrown down to him, Copley arms himself with a convenient handgun, then proceeds to rise from the grave and join a group of survivors in a remote farmhouse who all have the same case of amnesia as him. The group engages in some typical panic-induced squabbling, until everyone agrees to continue distrusting one another, while they begin to piece together the series of bad decisions from the night before that lead to this wicked, body-filled hangover. 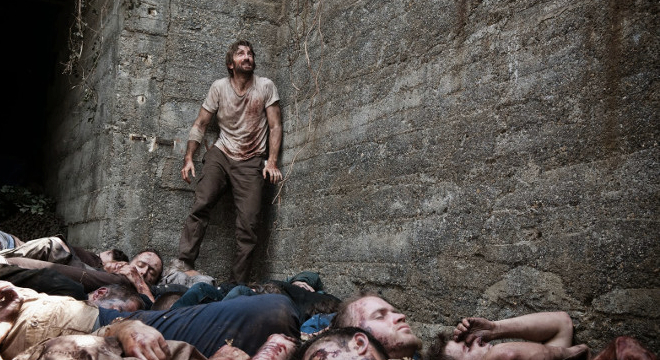 Prior to jumping aboard 'Open Grave,' director Gonzalo López-Gallego made the found footage misfire 'Apollo 18.' Here, López-Galellgo attempts to integrate some found footage-like elements into the story through the use of first-person flashbacks. While providing a few nominal jump-scares, the flashbacks are also intended to deepen the mystery of who is ultimately responsible for not only the amnesia, but also the mass grave that's clearly on everyone's mind. And although flashbacks can be a helpful – especially in a story like this – they actually tend to dilute the mystery, delivering a series of red herrings disguised as clues, as if the answer to the riddle is far too precious to be afforded any kind of reasonable foreshadowing.

As such, it becomes apparent that writers Eddie and Chris Borey want 'Open Grave' to be a little bit of everything: a complex whodunit, a psychological thriller, and a potentially supernatural scare fest. And while the story certainly dips its toe in each respective pool, it never immerses itself completely in any one category, leaving the final product to be an undercooked jumble of ideas that relies far too much on its ending, instead of developing a compelling story that is populated by interesting, three dimensional characters with actual arcs.

Whether they are or not, movies like 'Open Grave' feel like they were written backwards; there was an idea for an ending and then the writers had to construct a plausible road that could get them there. That's not to say certain films that feel like this can't be successful, because they can; it's just that, in this particular instance, the path to the ending is less about organically arriving at that precise conclusion, and more about mechanically pushing everything toward a prescribed, and in this case, contrived ending.

As moviegoers become more accustomed to this kind of trap, they, like the writers themselves, begin to limit the value of the story to the size of the punch that the ending can deliver. Rather than assess a film as the sum of its parts, movies have been reduced to the value of their final moments. It seemingly doesn't matter whether or not the finale makes everything that's come before meaningless or illogical, but whether it impresses the audience with its slight of hand. What's worse is that the entirety of the development of the characters is then limited to them perpetuating the deception of the script in order to better sell it to the audience. The result, then, is just like 'Open Grave': a group of cardboard cutouts posing as actual characters engage in a series of seemingly important tasks that only pretend to have some significance in regard to the "real" story that’s going on.

'Open Grave' even goes so far as to make one of the key survivors a literal mute witness, a woman who has no voice, and would only speak in Japanese if she did. This woman has all the answers, but they're locked away where no one who needs them can access them. That's a little bit like the film itself. For too long, the film refuses to spill its secrets, but when it finally does, it becomes apparent that they are not in a language anyone watching is actually speaking. 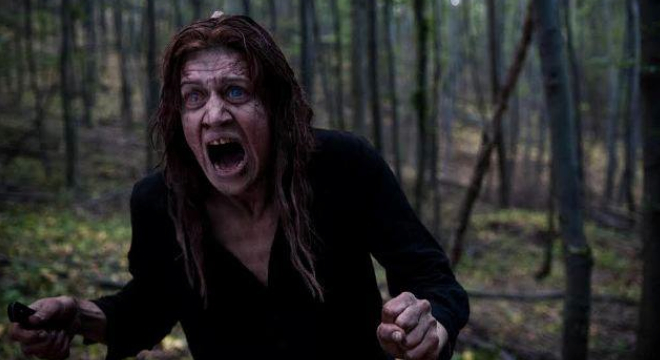 'Open Grave' comes from Cinedigm as a single 25GB Blu-ray disc. There are a handful of previews that will auto play before the top menu, but they can all be skipped.

While the film likely has a fairly low budget – which the actual aesthetics of the movie benefit greatly from – the 1080p AVC/MPEG-4 is rather nice, presenting a clear image that, in the right light, is filled with fine detail and textures. Although much of the film surprisingly takes place during the day, where answers are easier to find, and the horrors of the night before are seemingly vanquished – an interesting choice that again forces a comparison to 'The Hangover' – the story is bookended by two lengthy sequences at night. Impressively, the image maintains a consistent level of fine detail throughout both, while high levels of contrast produce sharp edges, crisp, full-bodied blacks and whites that are never blown out, despite running hot at certain points.

Again, fine detail is solid throughout, with a few slips and what appears to be soft focus here or there. Texture is also on display, which brings out the richness of the wooded surroundings of the film's setting. Color is vibrant, despite the film's palette leaning towards the colder end of the spectrum. Reds and greens look particularly sharp and bring an effective contrast to what is otherwise a deliberately cold and drab palette.

'Open Grave' delivers a very good-looking image that is perhaps only marred by some of the unimaginative choices of the filmmaker and cinematographer.

For a film as atmospheric as 'Open Grave,' it comes as no surprise that the sound design would be one of the most important components of the film, in terms of delivering a product that can at least sell its basic premise through the pointed use of certain genre tropes. The DTS-HD Master Audio 5.1 mix does a great job of delivering an always-on-the-verge-of-a-scare sensibility that constantly pumps in atmospheric elements, which fully immerse the listener in the film's environment. The effect, then, is that, while viewing, you tend to experience the shifts and scares as the characters do.

Now this would be far more impressive if it were part of a more impressive film, but the mix does its job quite well, and that offers a less than stellar movie the chance to have something positive said about it. For the most part, dialogue is very easily heard, and primarily emanates from the center channel speaker. This being something of a horror film, though, those voices are carried across all channels at certain times to heighten the sense of pending terror, or that someone is being watched and/or pursued. Rear channels handle a great deal of the heavy lifting in this regard, and as such, the balance and the imaging become one of the mix's primary highlights.

Elsewhere, sound effects are delivered through a combination of the front and rear channels, with heavier elements being handled up front. LFE is added to driving and shooting sequences to add further depth to the sound.

Overall, the mix here does a terrific job handling the atmosphere, which actually becomes something of great importance for the film itself.

Making of Open Grave (HD, 4 min.) – This is your standard talking heads info dump where the various actors talk about their impressions of the screenplay and why they feel it's the most exciting thing to happen to thrillers in a long while.

It's difficult to come away from 'Open Grave' not feeling disappointed. The premise is a compelling one, but the film constantly reaches for a bigger, more expansive story when a smaller, more intimate one is precisely what is called for in this case. The addition of paper thin characters and a bevy of unnecessary subplots that go unattended, the film sets itself up to fail by being too distracted at the possibilities of its own mysteries. Instead of presenting it as an intriguing whodunit, the film wants desperately to take things into an all too familiar realm of horror that saw it's moment pass some time ago. Still, with very good image and sound, this might be worth a rent for those curious to see if Sharlto Copley can do anything but ridiculously overact.

Sale Price 13.88
Buy Now
3rd Party 13.88
Usually ships within 6 to 10 days.
See what people are saying about this story or others
See Comments in Forum
Previous Next
Pre-Orders
Tomorrow's latest releases