Overview - A group of brilliant scientists have developed a form of psychotherapy with the invention of a machine which enables a person to enter another's dreams. When the device is stolen by a "dream terrorist," it is up to Atsuko Chiba, a scientist under the code name PAPRIKA, to track down the apparatus and save the world from madness.
OVERALL
Worth a Look

In the near future, an experimental device dubbed the "DC Mini" has been created which allows scientists and psychologists to access, record, and interact with people's dreams. Over the course of its development, a good natured doctor named Atsuko Chiba (voiced by Megumi Hayashibara) has been secretly using the device to counsel patients like detective Konakawa Toshimi (Akio Otsuka). Entering the detective's mind in the form of a girl named Paprika, Atsuko has been helping him deal with the nightmares that trouble his consciousness. However, when the DC Mini technology is stolen by a mysterious terrorist intent on using the device for evil, the dream realm becomes a very dangerous place. With the help of detective Toshimi and her colleagues, Atsuko/Paprika must enter the dark shadows of the terrorist's mind and stop him at all costs.

'Paprika' is a dense, visually stunning acid trip that only begins to make sense as it draws to a close. The story isn't necessarily confusing, but it does hold back every pertinent piece of information until the film has gained some momentum. Viewers who generally hate playing catch-up will despise this flick with every fiber of their being. Personally, I enjoy movies that drop me into the thick of things without a map. However, in this case I had a difficult time gaining my bearings because I was constantly bothered by the simplest questions. How does the DC Mini work? Why is it as dangerous as everyone says? What are the rules of entering and exiting the dream realm? What does the detective have to do with anything? Who is this Paprika chick?

To my relief, things eventually clicked and I realized 'Paprika' wasn't as nonsensical as I first suspected. Satoshi is interested in only one thing -- recreating the tone and atmosphere of a lucid dream. His scenes effortlessly bend reality and make it impossible to tell what's happening in the real world and what's taking place in the dream realm. When I stopped asking logic-based questions and began to accept the imagery and narratives of the dream realm for what they are, I began to genuinely enjoy 'Paprika' as a piece of experimental film, focusing on its complex, abstract themes rather than the literal constraints of its plot. By the time the credits rolled, I wanted to dive back in and give it another try.

That's not to say 'Paprika' is a great film. Satoshi relies on a series of avant-garde sensibilities that don't effectively define the nature of the film's real world. The conflict, urgency, and consequences of the DC Mini scenario have a difficult time gaining traction and are ultimately lost. I never felt as if I was engaged in a legitimate story -- instead, watching 'Paprika' is more akin to observing a piece of art that uses a paper-thin setup to justify its existence. Satoshi is so entrenched in his imagery that he arguably needed a more restrained storyteller on board to focus his tangential thinking. This problem is even more apparent after the first half of the film. The final act has drive and purpose, a definitive hero and villain, and a clearly defined direction. If the entire film had displayed hints of these three elements, 'Paprika' could've been much better. As it is, there are just too many mysteries cluttering the film to allow the story to live up to its potential.

In the end, 'Paprika' definitely isn't for everyone. It's daunting and extremely challenging, but at least it rewards patient viewers with stunning imagery and a thrilling final act. I'm curious to see whether later viewings of the film will make me fall in love with the story or simply grow weary of its impenetrable shell. 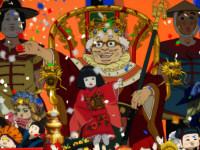 'Paprika' is presented with a vibrant 1080p/MPEG-2 transfer that generally looks very good. The palette is gorgeous and tossed enough primaries at the screen to make my eyes water. The color fills are stable and never bleed through the linework, resulting in an image doesn't waver or shake, even when thousands of butterflies stream across the screen. Contrast is vivid and comfortable, blacks are perfect, and the source isn't bogged down by compression artifacts or other blemishes. Best of all, this is the first anime I've seen where the traditional animation blends almost seamlessly with its CG elements. Aside from the usual differences in the frame rates, the CG has been meticulously designed to match the hand drawn characters, allowing the the two animation styles to peacefully coexist, even under the increased scrutiny that comes with a high definition transfer such as this.

Alas, there are a couple of imperfections to report. First off, although line work is generally crisp and the image well-rendered, there are a few random shots that look a tad hazy, as if the picture was slightly out of focus. To clarify, I'm not complaining about any of the intentional softness used by Kon to enhance the film's dream sequences. Instead, the particular breed of softness I'm referring to seems to be a technical artifact of the transfer itself. For quick reference, watch Dr. Shima closely in the first act and compare the clarity of his close-ups over the course of several scenes. Secondly, like most traditional animation, the picture falls victim to persistent color banding.

Although these minor issues prevent 'Paprika' from soaring to quite the same heights as other high definition anime releases like 'Tekkon Kinkreet,' make no mistake -- all in all, 'Paprika' looks very good. 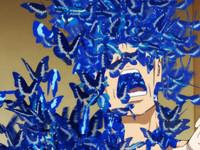 'Paprika' features a pair of English and a Japanese language Dolby TrueHD 5.1 surround tracks (48 kHz/ 16-Bit/ 3.0 Mbps) that weave a convincing atmosphere for the startling dream realities of the film. The surrounds are used aggressively and are peppered with the slightest audible details. The dream parade extends across the entire soundfield, pushing every last tink and rattle through the rear speakers. Pans are swift and characters cleanly whoosh across the front of the soundscape. Accuracy is spot-on as well, and the effects placements create a convincing space for all of the sound elements to inhabit. Best of all, the dialogue is crisp and clear, offering two nice mixes that will please both dubbers and subbies alike.

The only downside to both TrueHD mixes is a by-product of the otherwise engaging musical soundtrack. When a melody is blazing along, it sounds great, using thumping, low-end bass hums and shrill, stable treble tones to establish a bizarre cacophony of sound. But when any character opens their mouth to speak, the volume of the music is drastically reduced. Whether intentional or not, the end result is distracting. Instead of relying on proper prioritization, the sound designers seem to scramble to reign in the music. Every time it happened, it completely pulled me out of the otherwise immersive soundfield. 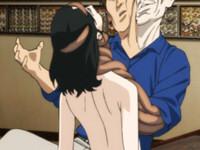 The Blu-ray edition of 'Paprika' ports over all of the supplemental material from the concurrently-released standard DVD. Note that with the exception of the trailers, all of the features listed below are presented in Japanese with optional English subtitles. 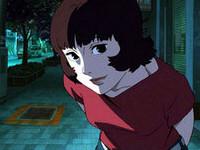 'Paprika' will continue to split anime fans into two distinct camps -- those who love its bizarre imagery and those who despise its unyielding mysteries. As a Blu-ray release, this one boasts a vibrant transfer, impressive Japanese and English Dolby TrueHD audio tracks, and a healthy dose of supplemental goodness. Still, the film itself is a tough one to recommend outright. Unless you're already a fan of the film, you may be better served giving this one a rent before deciding whether or not it belongs on your shelf.

Sale Price 10.71
List Price 19.99
Buy Now
3rd Party 5.97
In Stock.
See what people are saying about this story or others
See Comments in Forum
Previous Next
Pre-Orders
Tomorrow's latest releases