Overview - An epic biopic depicting the early years of legendary director and aviator Howard Hughes' career, from the late 1920's to the mid-1940's.
OVERALL
Recommended

Legendary director Martin Scorsese seems to have turned an interesting corner in his career over the last few years. While his early work explored the behavior of morally questionable characters felled by their own ambition, his more recent films have focused on characters who rise and fall in the face of noble challenges greater than themselves. 'The Departed,' 'Gangs of New York,' and 'The Aviator' each received widespread critical acclaim and countless award nominations and wins, but 'The Aviator' arguably emerges from the pack as Scorsese's most tragic and complex tale to date.

Based on the book by Richard Hack, 'The Aviator' tells the true story of Howard Hughes (Leonardo DiCaprio) -- the legendary aviation pioneer and film director ('Hells Angels,' 'Scarface') who slowly succumbed to a debilitating case of obsessive compulsive disorder. The film follows Hughes through the 1920s as he gains notoriety in Hollywood, into the '30s as he struggles against immense pressure from Pan Am Airlines owner Juan Trippe (Alec Baldwin) and US Senator Owen Brewster (Alan Alda), and ends with his seclusion in the '40s as OCD completely destroys his mind. Over the course of his descent into madness, he inspires the advancement of technology, influences film history, and falls in love with a virtual who's who of famous starlets including Katherine Hepburn (Cate Blanchett) and Ava Gardner (Kate Beckinsale).

'The Aviator' is a film filled with thematic complexities and a lack of concrete answers. Hughes is a fascinating character, but the nature of his drive and eventual descent into madness keep him at an arm's length from the audience. His behavior is arrogant and fraught with the inconsistencies inherent to his mental illness. It's tough to follow his thought process and he never becomes a comfortable main character -- he just seems too foreign to the imagination. I personally found it nearly impossible to feel anything but pity for the decaying monster hidden behind Hughes' successful persona.

But somehow, this very conundrum kept me enthralled from beginning to end. 'The Aviator' is a character study through and through -- it doesn't concern itself with explaining Hughes because there isn't an explanation. Instead, the film spends its time exploring power and its ability to corrupt. The more successful Hughes becomes, the more unhinged from reality he becomes. The implications of this process are taken to the extreme but ring true as the story barrels toward its inevitable conclusion. By the time the credits rolled, the film had me in a disquieted stupor -- I was disturbed by Hughes' sheer madness, saddened by his utter desperation, and reflective about the nature of pride and the human ego.

The actors do an amazing job bringing each of their characters to life. DiCaprio's disciplined portrayal of Hughes is simply breathtaking -- he lets go of himself entirely, sacrificing his Hollywood looks for the purity of his performance. Even better are his tense scenes with Alda and Baldwin (my favorite scenes in the film are those that encompass the legal chess match between TWA, Pan Am, and the US government). DiCaprio doesn't just switch his OCD on and off -- he retains the mannerisms that remind us of his affliction, but hides them from the other characters on screen. The result is subtle, but downright creepy.

The film may not work for everyone, but it's hard to deny the sure-handedness of Scorsese's direction. In my opinion, the film's only major weakness is the abruptness of the its ending. The first two acts have a palpable momentum that screeches to a halt as Hughes finally steps over his last line of sanity. The final minutes are empty and left me wondering what came next.

Still, 'The Aviator' is a film that everyone should watch. Yes, it's problematic at times and some have argued that it bites off more than it can chew in three hours, but it stands as a brilliant biopic that documents the life of an influential madman whose efforts continue to echo into the 21st century. 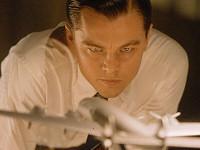 Warner presents 'The Aviator' on Blu-ray and HD DVD with identical 1080p/VC-1 transfers that render Scorsese's dense character study with confidence. Just one word of warning -- don't scramble to check your video connections when the film begins. The first hour of 'The Aviator' was shot to emulate the appearance of early two-tone cinema. While this process produces a variety of interesting visuals, it most notably elevates reds and causes greens to shift toward cyan blue. The result is a sepia-toned picture that bleaches plantlife of health and bronzes skintones. As the story approaches the '40s, however, Scorsese dramatically switches his technique to emulate the highly saturated glow of three-strip Technicolor films. The sudden changeover is an initial shock to the system as colors flourish and warm the screen.

Regardless of one's opinion of Scorsese's particular visual style, color reproduction on this Blu-ray is gorgeous and vivid. The palette is stable and I didn't detect any of the contrast wavering or bleeding that occasionally crop up on the standard-def DVD. Color saturation in general is much more pleasing to the eye and doesn't stumble at any point in the presentation. The print and the source are immaculate -- there aren't any distracting bouts of blemishes, noise, or artifacting. Fine detail is excellent and reveals the tiniest nuances of the cinematography. Even the darkest scenes are packed with crisp detail -- when Hughes begins locking himself away, his cluttered spaces are treasure troves of small legible text, sharp textures, and other elements cloaked in the shadows.

In fact, the only complaint I have about the entire picture is that the first hour of the film is softer than the rest. While this is a direct product of Scorsese's filming methods, it still keeps the high definition transfer from packing the punch of the last half of the film. For that reason alone, 'The Aviator' isn't likely to become a quick, go-to demo disc. Still, fans of the film will find little to complain about and are almost sure to put forth a convincing argument that this is a five star transfer. 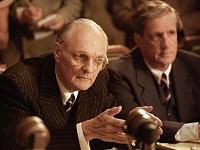 Unfortunately, the audio package is less impressive. 'The Aviator' Blu-ray features a decent Dolby Digital 5.1 surround mix (640 kbps) that's indistinguishable from the Dolby Digital Plus 5.1 track (also 640 kbps) on the HD DVD edition. Dialogue is crisp and well prioritized, but the entirety of the film resides across the front channels. The rear speakers are rarely engaged and the only noteworthy use of the surrounds came during the plane crash. Ambiance and acoustics are hindered by the limited soundfield and the track doesn't have the immersive characteristics of better high definition audio offerings. Directionality can be questionable at times, and I encountered several instances when sounds appeared in the front of the soundscape that should have been relegated to the back.

Despite the rather two-dimensional soundfield, the LFE channel has some bassy standout moments and the overall dynamics are above average. Pans are smooth, treble stability makes the film score sound wonderful, and subtle effects mingle nicely in the soundscape. At the end of the day, this track is a mixed bag that doesn't allow listeners to sink into the film like other high scoring audio packages available on Blu-ray. 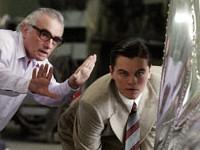 'The Aviator' was released as a 2-disc DVD in 2005 that included a wealth of special features which meticulously detailed the entire production. Thankfully, that package remains intact on this Blu-ray edition, with every feature making a repeat appearance.

Rounding out the package is a "Stills Gallery" and the film's "Theatrical Trailer" presented in high definition. 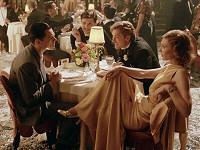 While everyone may not personally respond to the story of 'The Aviator,' this release is still an easy one recommend. It features an excellent video transfer and a thorough series of supplements that include a three hour commentary and a detailed collection of featurettes and documentaries. The front heavy audio track is less thrilling, but does its job well enough. All in all, fans won't be disappointed with this Blu-ray release and will likely find 'The Aviator' to be a very respectable addition to their collection.